Pandemic worsening around the world 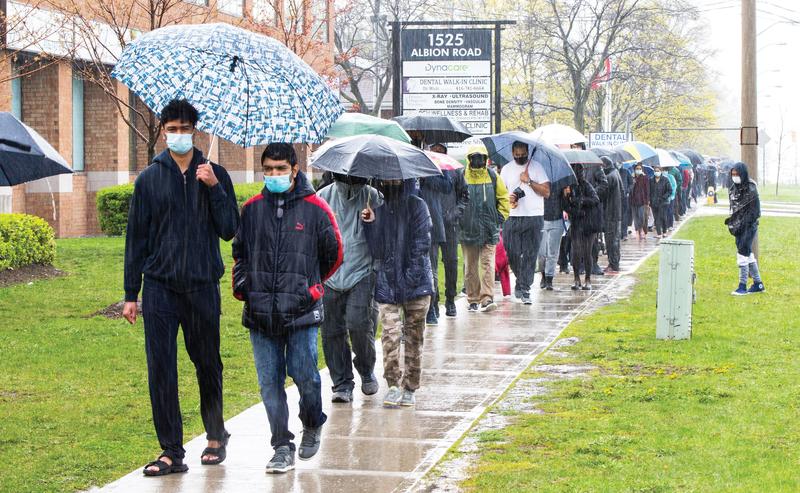 The pandemic is worsening in many parts of Asia, the Americas and Europe.

As COVID-19 cases worldwide have been increasing for the ninth consecutive week, the World Health Organization said on April 28 that India alone accounted for 38 percent of all infections — or 2.17 million new cases — recorded in the seven-day period that ended on April 25.

The surge in India is understood to be fueled by the new COVID-19 variant dubbed as the “double mutant” and scientifically identified as B1617. It was “detected at increasing prevalence” among the new cases in the country, according to the WHO.

The B1617 variant is believed to contain mutations from two separate virus variants. The WHO said that B1617 “has a higher growth rate than other circulating variants in India, suggesting potential increased transmissibility.”

Seventeen countries are now suspected of harboring the new variant, the WHO said, including Singapore, the United Kingdom and the United States.

India also reported a 93 percent week-on-week increase in the number of coronavirus-related deaths last week. The number of COVID-19-related deaths has also increased for the sixth consecutive week in Southeast Asia and the eastern Mediterranean region, but the fatality figures elsewhere have slightly decreased.

“To put it in perspective, there were almost as many cases globally last week as in the first five months of the pandemic,” said WHO Director-General Tedros Adhanom Ghebreyesus on April 26. He said the situation is India is “beyond heartbreaking”.

Pakistan recorded on April 27 more than two hundred COVID-19 deaths in a day for the first time since the start of the pandemic.

Basudev Pandey, former director at the Epidemiology and Disease Control Division under the Department of Health Services, an agency under Nepal’s health ministry, said there was a lack of adequate contact tracing of people coming in contact with infected people.

In the Philippines, Metro Manila and its four adjacent areas will remain under strict lockdown for another two weeks starting May 1 while the government continues to curb the COVID-19 infections and decongest hospitals, Philippine President Rodrigo Duterte said on April 28. “I’m sorry that I have to impose longer (quarantine restrictions) because it is needed due to a spike of infections, and hospitals are full,” Duterte said in a public address.

Thailand’s top business groups offered to join the government in a mass vaccination rollout from June as the Southeast Asian nation grapples with its worst outbreak.

Prime Minister Prayuth Chan-Ocha met with representatives of the Thai Chamber of Commerce, the Thai Bankers Association and the Tourism Council of Thailand on April 28 and identified specific roles for the private sector in the rollout that aims to cover 70 percent of the nation’s population by the end of this year.

In Japan, Organizers of the Tokyo Olympics rolled out stricter coronavirus countermeasures on April 28, including a plan to test athletes daily.

Overseas spectators have already been ruled out and a decision on whether to allow domestic spectators will be taken in June, a few weeks before the Games begin on July 23.

In several countries of South America, the pandemic in the first four months of this year was worse than what had been faced in 2020, Pan American Health Organization Director Carissa Etienne said in a briefing in Paris.

“This shows that we will only overcome this pandemic with a combination of rapid and equitable vaccine access and effective preventive measures. This pandemic is not only not over, it is accelerating,” she added.

Over the past week, more than

1.4 million people across the Americas became infected and over 36,000 died from complications related to COVID-19, which means one in four coronavirus deaths reported worldwide last week were in the region.

Etienne pointed to Canada’s infection rates, which surpassed US figures for the first time since the start of the pandemic; surging cases across the Caribbean and Central America, underscoring the expectation of more hospitalizations in Costa Rica as the country reported a 50 percent jump in cases in the last week; and spiking infections across South America.

Brazil is on the verge of registering 400,000 coronavirus deaths this week, after the Health Ministry on April 28 reported 3,163 deaths in 24 hours, bringing the official death toll to 398,185. The country is quickly catching up with the world’s worst death toll in the US, which has seen more than 570,000 casualties in total but less than a thousand deaths per day in recent weeks.

Argentina reported more than 29,000 new daily cases of COVID-19 on April 27, along with a record occupation of intensive care units in the capital Buenos Aires. Peru and Canada are also fighting an upsurge.

The situation in Europe is more disparate. While France and Italy prepare to relax their restrictions, Germany’s lower house of parliament backed Chancellor Angela Merkel’s controversial lockdown law, as officials struggle to check a fresh wave of coronavirus infections.

Merkel’s ruling coalition pushed the legislation through after her government failed to find common ground with regional leaders on measures needed to fight the pandemic. The law — which expires at the end of June — triggers tighter restrictions in virus hotspots and closing schools. “We have to break this third wave” by reducing contact as far as possible, Health Minister Jens Spahn told lawmakers during a stormy Bundestag debate.

The number of confirmed coronavirus cases in Germany increased by 24,884 to 3.19 million, data from the Robert Koch Institute for infectious diseases showed on April 28. The death toll rose by 331 to 80,634.