By Tan Yingzi in Chongqing 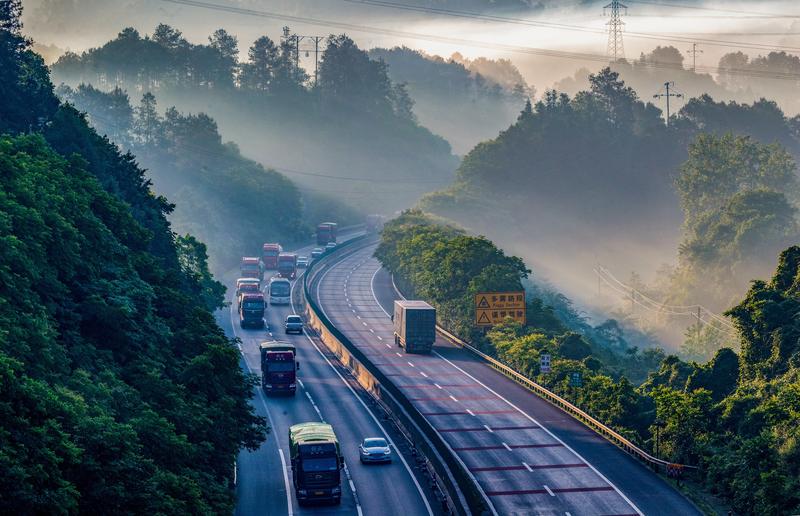 The Chongqing section of the Baotou-Maoming Expressway in May 2020. (QU MINGBIN / FOR CHINA DAILY)

Driving along the Chongqing section of the Baotou-Maoming Expressway, travelers will encounter the majestic White Horse Mountains, site of a major battle in 1949 during the War of Liberation (1946-49).

Now this beautiful land, where hundreds of martyrs were buried, is undergoing large-scale development to become a travel destination. People here have been lifted out of poverty in recent years, striving for a better life. But one cannot forget the sacrifice of the soldiers who fought for a bright future for coming generations.

In White Horse Town, there is a cemetery for about 400 soldiers of the People's Liberation Army who lost their lives. In the center stands a black marble stele engraved with the words "Revolutionary Martyrs Immortal", and on the base below, the story of the Battle of White Horse Mountains is retold.

Although the Communist Party of China declared the founding of the People's Republic of China on Oct 1 in 1949, some areas in the southwest remained under the control of Kuomintang, including Chongqing, for a time.

In early November 1949, led by Liu Bocheng and Deng Xiaoping, the Second Field Army and Fourth Field Army of the PLA launched an attack on Chongqing.

At the end of the month, the PLA entered the urban area of Chongqing and declared the liberation of the city, which had served as a wartime capital of the KMT government during the War of Resistance Against Japanese Aggression (1931-45).

The victory laid a solid foundation for PLA to free the entire southwestern region of China.

In a series of battles during the war, one of the most decisive was the Battle of White Horse Mountains in the Wulong district of Chongqing.

In the three-day battle, PLA and Kuomintang soldiers fought fiercely over an area of about 400 square kilometers in the White Horse Mountains.

Facing the reality that they had already lost the war, most KMT soldiers and officers in the White Horse Mountains battle fought unwillingly and passively, and the PLA soon rolled to victory, destroying the last line of defense for the KMT army and paving the way toward the liberation of Chongqing.

The White Horse Mountains, covering one-sixth of Wulong district, have rich natural resources, a long history and a revolutionary past. But in the past, the remote location and poor transportation infrastructure hindered its development and held the local people in poverty.

With the construction of Baotou-Maoming Expressway and other cross-regional highways, it's now only an hour's drive from downtown Chongqing to White Horse Mountains Scenic Area, opening the way for tourists and bringing higher incomes for local residents.

Chen Daping, 50, who once lived below the poverty line, now works as a security guard in the scenic area, making more than 2,000 yuan (US$308) a month. His wife is a cook at a homestay.

"We make much more money than just growing crops, and we are going to build our own homestay," Chen said. "Life is getting much better."