By Chen Meiling in Beijing and Shan Juan in Xi'an 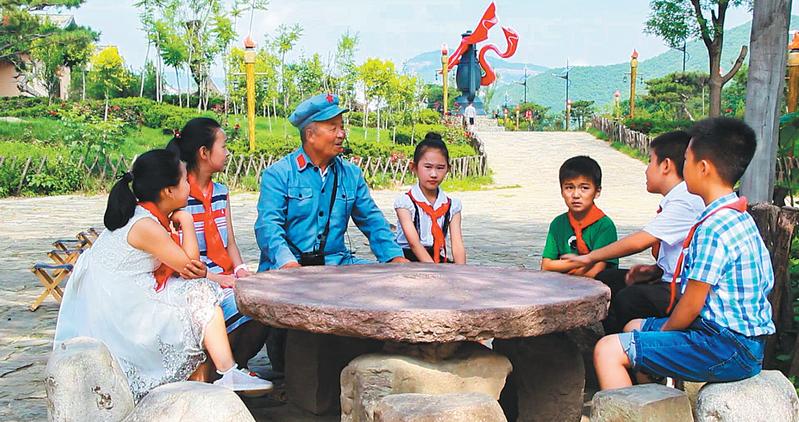 At 7 am, students stood ramrod straight as they sang the national anthem during the flag-raising ceremony at Zhaojin Beiliang Red Army Primary School in Zhaojin town, Tongchuan, Shaanxi province. The song was followed by another about how young people bugle and vow to support the rejuvenation of the country.

The school was built around the site of the Chenjiapo conference, which played an important role in the victory of the Red Army during wartime from the 1920s to 1940s. It was held in August 1933, when the Communist Party of China consolidated and strengthened forces of the army in Northwest China's Shaanxi and Gansu provinces.

In 2018, the school was designated a demonstration school for Red education, which refers to Chinese revolutionary history, the spirit of role models and stories of the CPC. All 160 pupils are immersed in Red songs, Red tales and Red films. They also visit historical museums and sites where major events happened, sometimes outside the province, according to Feng Gangzhan, the school's principal.

"Red culture can help to build their view of the world, life and values, and to develop good morals and civilized behavior," Feng said, adding that behaviors encouraged include picking up trash, saving food, protecting the environment and helping people in need.

Wang Tianjiao, a sixth-grade student, told Shaanxi Daily: "The spirit of heroes inspires me to stick to my dreams." Hou Shiyu, another student, said she learned to cherish life, as it was purchased at a high price through the sacrifices of earlier generations.

Zhaojin, a central base area of the Red Army, witnessed one of the key stages upon which modern Chinese history played out. Red education spreads from children to adults and then around the country. The town has a training center for CPC officials, and its influence has been enlarged as China celebrates the 100th anniversary of the Party this year.

At the Xuejiazhai revolutionary site in a secluded mountain area of Zhaojin, the old military hospital, clothing factory, machinery factory, warehouse and armory have been preserved. Tourists, some wearing Red Army uniforms, learned how the army had built a community and overcome daunting challenges to carry on the fight.

Visits to the Shaanxi-Gansu revolutionary memorial hall in Zhaojin exceed 800,000 annually and is expected to surpass 1 million this year, Song Jianbin, deputy head of the hall, told media in April. 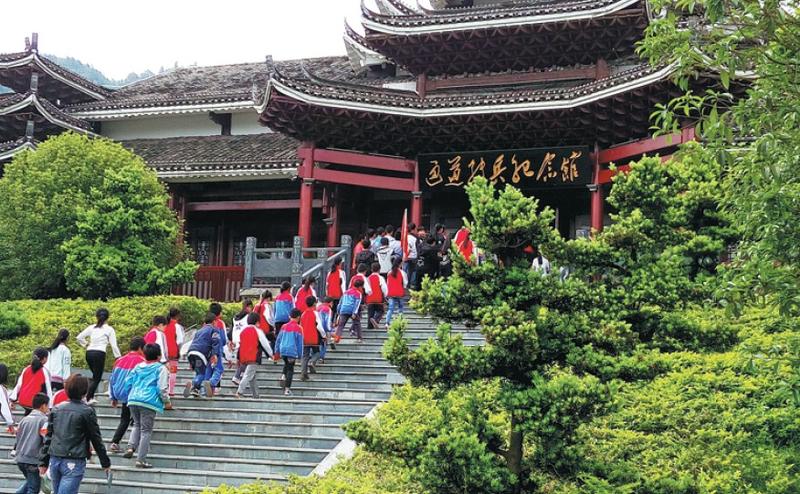 On the Red commercial block, locals have revived old food recipes to offer visitors a taste of the primitive dishes the army once ate－wild plants and steamed cornbread, for example－to give them an appreciation of those hard times and help them learn to cherish the good days today.

Since 2015, about 3,400 people got jobs thanks to the Red tourism boom, and incomes have steadily increased, especially among the poor, Bai Wei, mayor of Zhaojin, told chinanews.com.cn.

Besides farming, locals can earn money by renting land, working at local companies, receiving dividends or beginning their own business. Many young people have returned to their hometown to join the tourism industry.

The salary of Zhu Jin, a college student who returned, grew from 1,800 yuan monthly as a docent to 4,000 yuan as an investment manager at a local tourism company. She told China Central Television that besides Red sites, tourists can also experience the beautiful natural landscape of mountains, waterfalls and pastures, as well as skiing in the town, which made a stir on video platforms. 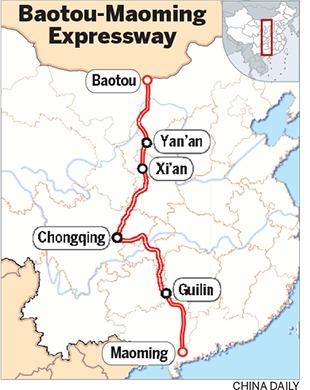 Zhaojin is one example of regions that have benefited from Red history. Driving along the Baotou-Maoming Expressway－which starts from Baotou, Inner Mongolia autonomous region, and runs south to Maoming, Guangdong province－tourists can visit several major sites in the formative life of the CPC.

Yulin, Shaanxi, witnessed the founding of the first CPC organization in northern Shaanxi in 1924 and the beginning of armed resistance against the Kuomintang regime in northwestern China in 1927. Yan'an was base of the Central Committee of CPC from 1935 to 1948 during the War of Resistance Against Japanese Aggression (1931-45) and the War of Liberation (1946-49). In Shaanxi province's capital, Xi'an, the office of the Eighth Route Army, the force aimed at fighting the Japanese, functioned to promote an anti-aggression movement among the public, buy medical and communication supplies for the army and organize more than 20,000 young adults to aid Yan'an, which contributed significantly to victory.

Jiao Yibo, a pupil in Xi'an who visited the site, said he learned the meaning of "difficult condition" after seeing the cramped basement that was used for surgeries.

"The footprints of revolution show hardships as China moved forward, and I realized the responsibility of our generation in national rejuvenation," he wrote in his diary.

Tongdao Dong autonomous county of Huaihua, Hunan province, along the expressway, was the site of a major conference in 1934, when the Red Army decided to turn toward Guizhou province, where the enemy forces were weak. The fateful decision turned out to be a matter of life and death, but the Red Army prevailed.

Today, the memorial hall for the event, with more than 1,000 exhibits, welcomes about 1.2 million visits annually. Tourists range from children to the elderly－people from across the country, said Zheng Xiang, president of the hall.

He said that besides sightseeing, it's important to talk, sing and participate in other experiences. The hall has organized a flower basket ceremony to honor martyrs, and activities such as symposiums, songs and even the making of straw sandals to "help tourists fully feel and learn from history".

In a major program that attracts 5,000 people a year in Tongdao, tourists can walk 7 kilometers on a mountain road to get a taste of the difficulties the Red Army once underwent and learn its stories.

More than 35,000 rural people in Tongdao are associated with tourism services, which have helped 25,700 poor people shake off poverty. Locals' incomes grew by an average of 800 yuan (US$123) per person annually, according to the local government.

The expressway, which links seven regions－the provinces of Shaanxi, Sichuan, Hunan and Guangdong, along with the Inner Mongolia and Guangxi Zhuang autonomous regions and the city of Chongqing－offers rich resources for Red tourism and continues to play an important role in the development of western China.

Zhu Youfang in Changsha contributed to this story.