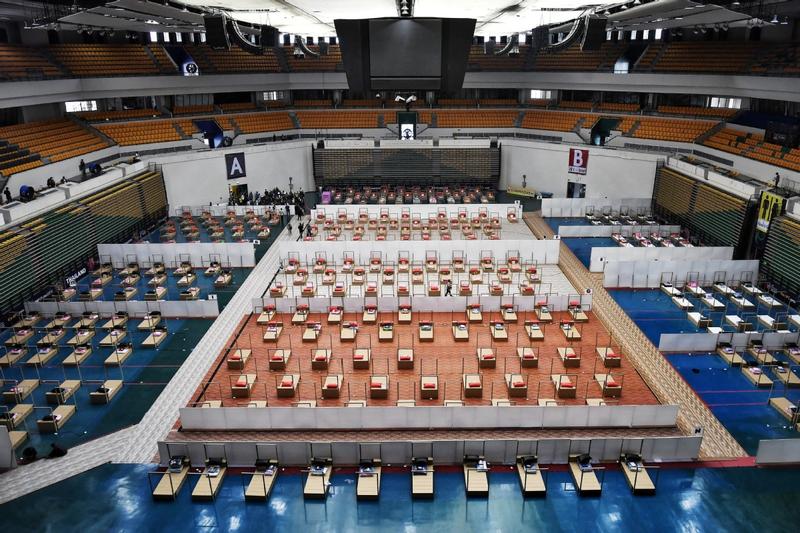 Rows of beds are prepared for incoming COVID-19 patients at a new field hospital in a sports stadium on the outskirts of Bangkok, Thailand on April 18, 2021. (PHOTO / AFP)

A rise in COVID-19 infections in Southeast Asia, despite the rollout of mass-vaccination campaigns, points to gaps in public health systems in the region and the lack of proper follow-up measures in relation to existing patients and suspected cases, experts said.

While vaccinations will help curb the spread of the virus, public health experts said the inoculation drives must be complemented by mass testing, contact tracing, quarantining and continuous enforcement of strict health protocols.

Compounding problems is a supply squeeze on global vaccines and the inability of most developing economies to compete with industrialized nations in securing more jabs.

Dicky Budiman, an epidemiologist at Griffith University in Australia, said vaccine nationalism is limiting the access to COVID-19 shots for low－and middle-income countries, and members of the Association of Southeast Asian Nations should bear this in mind.

Budiman, who has worked with the ASEAN secretariat and the Indonesian government, said it is time ASEAN members work together in overcoming the pandemic. For instance, they can negotiate with suppliers and buy doses together as a regional bloc.

But he added ASEAN should not rely solely on vaccines.

Inoculations will reduce people's risk of contracting the virus and help ease the burden on public health systems, but such campaigns alone will not be enough to beat the pandemic, Budiman said, citing the case of Indonesia, which now has the highest number of COVID-19 cases in Southeast Asia.

ALSO READ: ASEAN Plus Three to strengthen cooperation against COVID-19

Budiman said an effective strategy in containing the virus should include mass testing, contract tracing and quarantining.

As of Monday, there were about 1.6 million COVID-19 cases and 43,567 deaths in Indonesia. The government launched a vaccination program in January and said it aims to inoculate over 180 million Indonesians this year.

"There are fears of side effects compounded by misleading media reporting and social media rumors", and lack of effective communication from governments, Khor said.

In the Philippines, which is battling a big surge in cases, the government has relied on vaccinations, with authorities aiming to cover 70 percent of the nation's over-100 million-strong population by year-end.

On Thursday alone, 11,429 new infections were recorded in the country. Monday added 9,628 cases, bringing the total number to 945,745, second only to Indonesia in Southeast Asia.

Thailand, which had been effective in controlling infections, is reporting more cases. Bars and massage parlors in 41 provinces have been closed until Friday. Almost 1,770 new cases were confirmed on Sunday. To date, the country has recorded 43,742 infections with 104 deaths.

Xu Weiwei in Hong Kong contributed to this story.