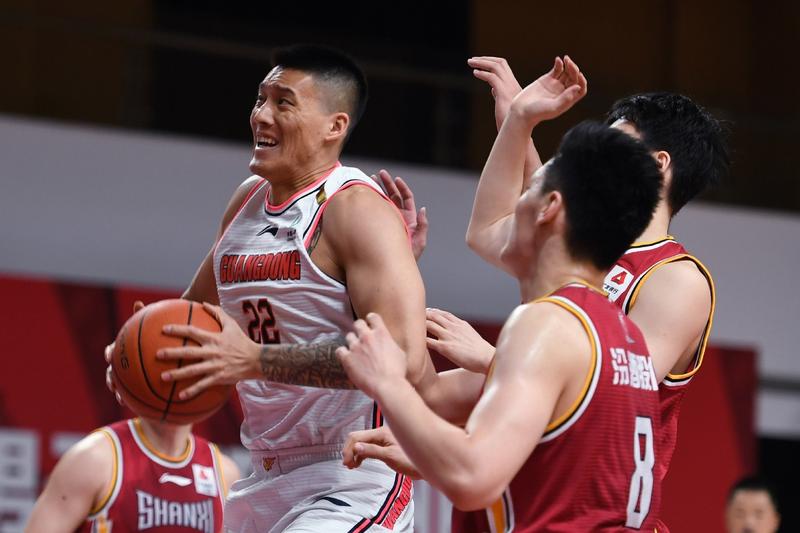 Zeng Fanri of Guangdong Southern Tigers competes with players of Shanxi Loongs during the 54th round match at the 2020-2021 season of the Chinese Basketball Association league in Zhuji, East China's Zhejiang province, April 7, 2021. (PHOTO / XINHUA)

ZHUJI - The Guangdong Southern Tigers notched a 10-game winning streak after edging the Shanxi Loongs 94-89 in overtime in the CBA on Wednesday, while the Shenzhen Aviators beat the Zhejiang Lions 103-96.

Both teams could hardly find their rhythm to shoot from three-point range, as Shanxi only made four out of 26 attempts from the arc, shooting merely 15 percent throughout the game. Led by Hu, who kept attacking the rim with tough layups, Guangdong prevailed 40-35 at halftime.

While Guangdong was trapped into stagnation on the offensive end in the third quarter, Shanxi regrouped after they scored consecutive jump shots, establishing a nine-point lead going into the last quarter.

Zhao made two straight three-pointers to help Guangdong level the game 81-81 in overtime, where Hu stood out and contributed five points to turn the tables.

Shen was unstoppable in the paint in the early minutes as he racked up 16 points, guiding Shenzhen to lead the first quarter 37-18. Zhejiang kept cutting the deficit in the remainder of time, but was unable to gain an advantage.

Elsewhere, the Beijing Ducks claimed a 95-86 win over the Sichuan Blue Whales.