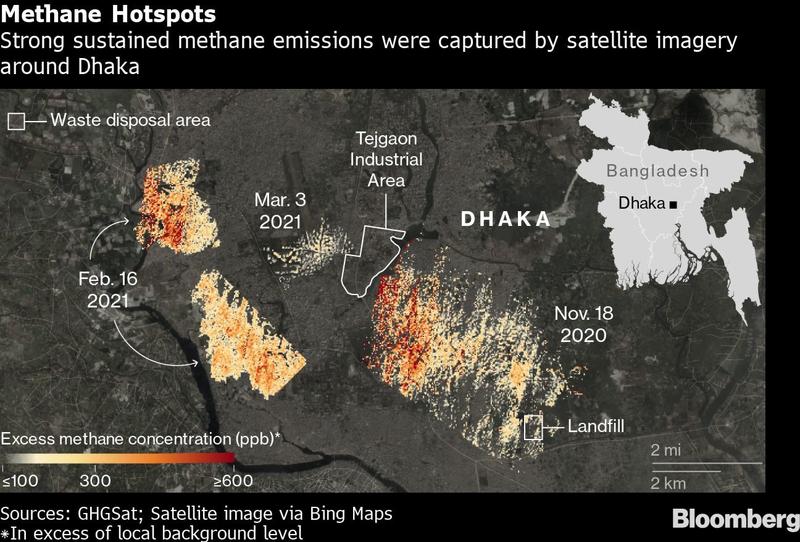 One of the countries most vulnerable to climate change has also been revealed as a major contributor of methane, a greenhouse gas that’s about 80 times more potent in its first two decades in the atmosphere than carbon dioxide.

The 12 highest methane emission rates detected this year by Kayrros SAS have occurred over Bangladesh, according to the Paris-based company, one of several that specialize in analyzing satellite observations to locate leaks. “It has the strongest sustained emissions we've seen to date where we can’t clearly identify the source,” said Stephane Germain, president of GHGSat Inc, which also picked up the plumes.

Bluefield Technologies Inc., which analyzed European Space Agency data to identify a large methane plume in Florida in May, also detected the concentrations over Bangladesh. “Our analysis shows that Bangladesh has some of the highest methane emissions in the world that can be detected by satellites,” said Yotam Ariel, the company’s founder.

Methane, a greenhouse gas is about 80 times more potent in its first two decades in the atmosphere than carbon dioxide, is a particular concern for those working to slow the pace of climate change as it is odorless and colorless, making leaks extremely hard to detect

Scientists are just beginning to pinpoint the biggest sources of methane. Observations from space can be seasonal due to cloud cover, precipitation and varying light intensity. Satellites can also have difficulty tracking offshore emissions and releases in higher latitudes such as the Arctic, where Russia has extensive oil and gas operations. Because of these limitations existing data isn’t yet globally comprehensive.

But the emissions over Bangladesh are drawing attention. Its low elevation and high population density make it particularly vulnerable to extreme weather events and rising oceans. The country chairs the Climate Vulnerable Forum, whose 48 members represent 1.2 billion people most threatened by climate change.

“We’re aware of the problems,” Bangladesh’s Environment and Climate Change Minister Shahab Uddin said in an interview. The bulk of the methane likely came from rice paddies, he said. When farmers flood their fields, bacteria in the waterlogged soil can produce large quantities of the gas. “The other source is the landfill gas,” Uddin said, released when trash breaks down.  “We’re working to take mitigation measures.”

Domesticated livestock, leaks from the oil and gas industry, landfills and coal mining are just some of the human activities that result in methane emissions, according to the Global Methane Initiative. At least a quarter of today's global warming is caused by man-made methane emissions, the Environmental Defense Fund estimates.

Methane concentrations in Bangladesh likely originate from a combination of sources including paddy fields, landfills, leaky natural gas pipelines and coal stockpiles, according to Kayrros. The company uses data from the ESA’s Sentinel-5P and Sentinel-2 satellites. It ran a dispersion simulation that takes into account atmospheric conditions such as wind, that can move methane plumes away from their source.

“It's a great example of how better monitoring and data analysis can pinpoint emissions sources and open up opportunities to tackle both greenhouse gas emissions and, in other cases, air pollutant emissions,'' said Lauri Myllyvirta, lead analyst with Centre for Research on Energy and Clean Air.

Methane is a particular concern for those working to slow the pace of climate change. The gas is odorless and colorless, making leaks extremely difficult to detect. Halting accidental emissions from energy infrastructure is some of the lowest-hanging fruit because companies stand to benefit from cleaning up operations. They’re losing product that could have been sold and risk reputational damage as investors such as BlackRock Inc. demand higher standards.

“The methane concentrations we see over Bangladesh are a signal and deserve more study,” said Steven Hamburg, chief scientist at the EDF, which plans to launch its own satellite to track methane emissions next year. “It will require more work to make reliable quantitative estimates of emissions and determine sources.”

The ability to attribute leaks to individual operators is getting closer as more satellites are launched that offer greater precision and more frequent coverage. GHGSat in February said it tracked methane leaks from at least eight natural gas pipelines and unlit flares in Central Turkmenistan that released as much as 10,000 kilograms per hour.

EDF’s PermianMap project, which combines data from satellites and other ground-based observations to attribute and aggregate emissions by operator in one of the world’s most active fossil fuel basins, is a sign of the transparency to come. “The ability to attribute methane emissions at an asset level is here now,” said GHGSat’s Germain. “The challenge is to increase the frequency of the observations with more satellites.”