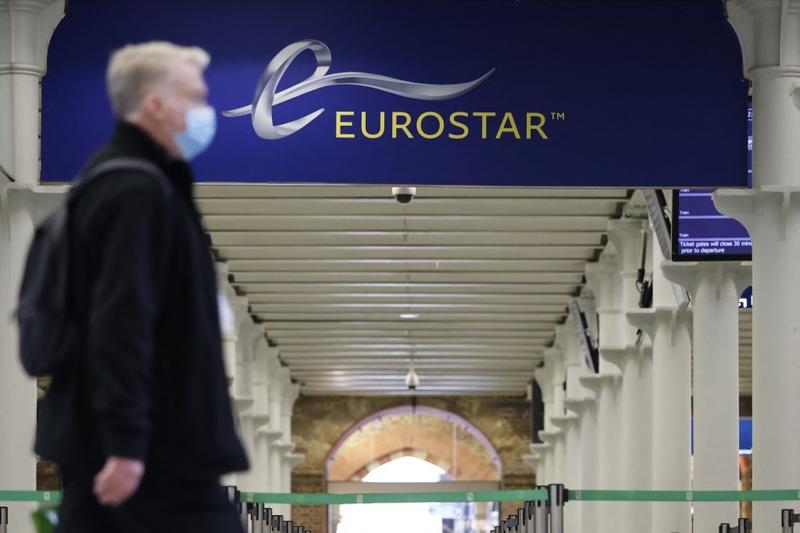 A person wearing a face mask because of the coronavirus pandemic walks past the departure area of the Eurostar terminal at St Pancras International train station in London on Jan 18, 2021. (TOLGA AKMEN / AFP)

The British government is resisting calls for a bailout for international train operator Eurostar, which has until June to repay loans it took out after passenger numbers plummeted during the COVID-19 pandemic.

Eurostar held emergency talks with lenders last week, seeking to avoid bankruptcy this summer, when a 400 million pound ($555 million) debt is due for repayment, despite the continent still being in the grip of the virus.

The company has now turned to restructuring its loans, following weeks of lobbying ministers in the UK and Europe for a bailout that has failed to produce a deal, The Daily Telegraph reported.

The company has now turned to restructuring its loans, following weeks of lobbying ministers in the UK and Europe for a bailout that has failed to produce a deal, The Daily Telegraph reported

UK ministers are continuing to take a tough line, insisting the deadline to clear the debt can be extended, according to a report in the Financial Times on Tuesday.

The FT quoted a UK official, briefed on the situation, who said: "The tunnel and the rolling stock are there. Someone would take them on, even if the company went to the wall. There's no appetite for bailing them out at all."

The UK sold its stake in Eurostar in 2015, and the service, which operates beneath the English Channel that separates the UK from continental Europe, is now 55 percent owned by the French state railway SNCF, 40 percent by infrastructure funds CDPQ and Hermes, and five percent by Belgian railway firm SNCB.

Reports first emerged last November that Eurostar was facing financial collapse after suffering massive losses. The company requested bailout funds from the UK government in January, after the crisis and lockdowns caused it to suffer a 95 percent fall in passenger numbers, according to finance newspaper Citywire.

Last May, Britain's Chancellor of the Exchequer Rishi Sunak unveiled a support program to help strategically important companies that "have exhausted all options".

The Telegraph noted that airlines such as British Airways and easyJet have been handed billions of pounds in government loan guarantees since December.

But the UK government is insisting that French state and private shareholders should be responsible for any rescue package for Eurostar, which operates the trains on the high-speed lines between the UK and the continent but does not own the infrastructure. The company is currently running just one service a day to both Paris and Amsterdam due to ongoing border controls.

UK transport secretary, Grant Shapps, told a parliamentary select committee in February that Eurostar "is not our company to rescue".He added, "We're very, very keen for the Eurostar to survive, and we'll wait to see the plan [from state rail firm SNCF]".

Last month, the Telegraph quoted a rail industry source to have said: "The UK Government has been very clear that Eurostar must go to its shareholders for support in the first instance. That is right and proper, but it's crucial that France and Britain work together to find a solution.

"The inescapable truth is that both countries gain billions of pounds' worth of benefits from the fixed link, and both are on the hook if Eurostar fails."