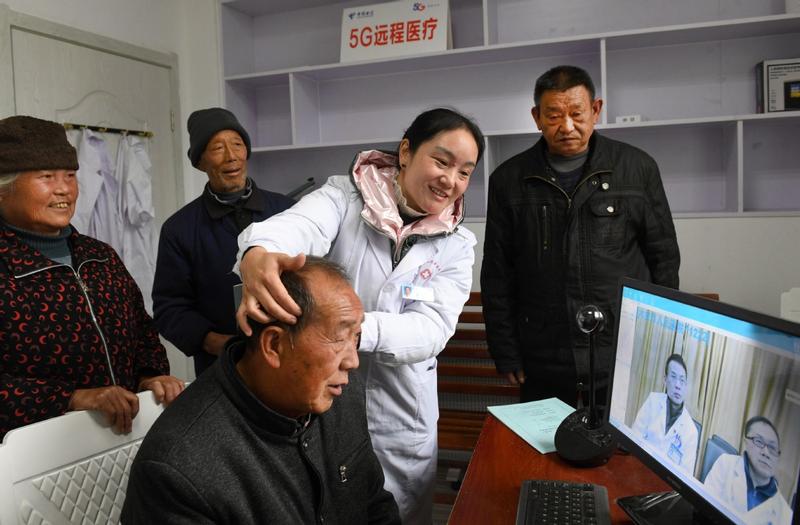 In this undated photo, a village doctor (second from right) assists a patient during a virtual consultation in Jinzhai county, Anhui province. (PHOTO / XINHUA)

China will establish a general support mechanism for covering outpatient medical bills under the employee basic medical insurance system and broaden the use of funds in individual accounts, in order to ease people's medical burden, the State Council's executive meeting chaired by Premier Li Keqiang decided on Wednesday.

General outpatient medical expenses related to some chronic and rare diseases, as well as frequently occurring diseases and common illnesses, which incur severe damage to health and heavy costs, will be covered by the unified accounts in a step-by-step manner.

The reimbursement ratio will start from 50 percent and will be tilted in favor of retirees as appropriate. Insurance benefits will be gradually raised as the capacity of the unified accounts increases.

China has been a trailblazer in providing basic medical insurance as a public good. We have already gained some experience and must continue to explore the way ahead to steadily take the reform forward.

For retirees, a fixed amount will be allocated from the unified accounts to their individual accounts. The amount will be gradually adjusted to about 2 percent of the local average basic pension benefits in the year when the reform is enacted.

Provincial-level governments may set a three-year transition period to gradually achieve the goals of the reform in an orderly manner.

"China has been a trailblazer in providing basic medical insurance as a public good. We have already gained some experience and must continue to explore the way ahead to steadily take the reform forward," Li said.

Participants in the meeting also decided on policy steps to facilitate faster internet connections at lower prices to benefit businesses and the public. The construction and application of 5G services and gigabit fiber optic networks will be vigorously advanced. By the end of this year, gigabit fiber optic networks are expected to cover more than 200 million households.

Basic telecommunications service providers will be guided to cut the average broadband service rate and the average dedicated internet service rate for small and medium-sized enterprises by another 10 percent.