Wuhan to HK: 76 days of heroism

By Willa Wu in Hong Kong

Selfless acts, unprecedented coordination joined forces a year ago to bring home thousands of Hong Kong residents trapped in Hubei province by an unknown killer. Here are some of their stories. Willa Wu reports from Hong Kong. 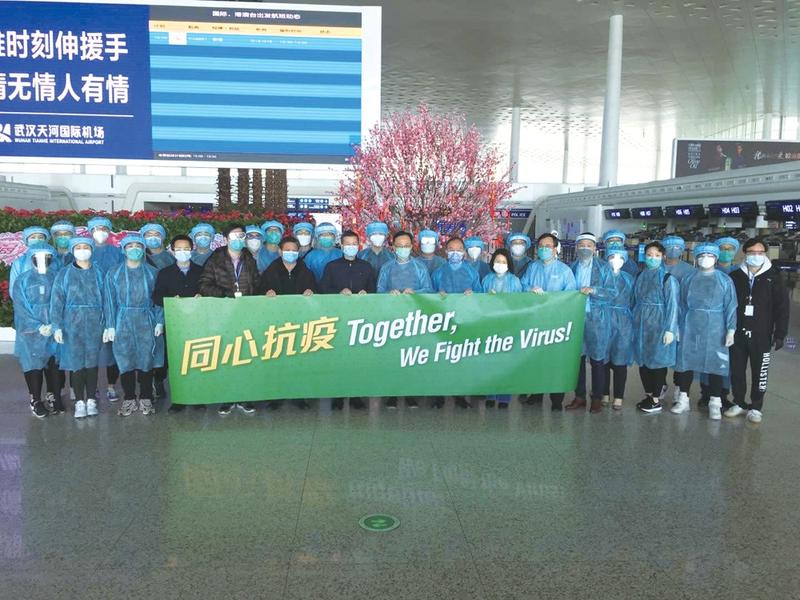 In this undated photo, people who worked in chartered-flight operations arranged by the Hong Kong government, as well as employees of the Hong Kong Economic and Trade Office hold a banner that urges people to cooperate in taking measures to stop the spread of the coronavirus, at Wuhan Tianhe International Airport. (PHOTO PROVIDED TO CHINA DAILY)

On the eve of Lunar New Year 2020, Vincent Fung Hao-yin was awakened at 4 am by an urgent phone call from his deputy. People were dying and many more had come down with a mysterious illness in Wuhan, where Fung was serving in the city as the director of the Hong Kong Economic and Trade Office.

Fung was told that all exits from Wuhan, no matter by road, rail or air, were to be closed in six hours. If he wished to make it back to Hong Kong for a New Year’s family reunion, he had just enough time to pack up and leave.

COVID-19 had become unleashed on an unprepared world. No one knew when people would be allowed to leave Wuhan, the capital of Hubei province. The number of coronavirus infections in Wuhan soared from one on Dec 1, to 495 on Jan 23. More cases were recorded in areas surrounding Wuhan. China’s top infectious disease expert, Zhong Nanshan, confirmed “the virus could be transmitted from person to person.”

“Will you leave as scheduled, director?” his deputy asked. It was a moment of silence. “No. I will stay to help those in need,” Fung answered firmly.

“Hong Kong people in the city will be trapped and need our help,” Fung said in an interview. One of Hong Kong’s five major offices on the Chinese mainland, Fung’s office shoulders the responsibility for supporting Hong Kong residents and businesspeople in the Central Region, covering Hubei, Hunan, Shanxi, Jiangxi and Henan provinces.

When the pandemic hit Wuhan, it was at first chaotic, and people were confused and frightened. Then a lot of volunteers stepped out ... Solidarity and mutual support are very important.

More than 4,000 Hong Kong residents were caught by the lockdown, official records later showed — not just in Wuhan, but across the entirety of Hubei province. Most were short term visitors who had come for family reunions during the Lunar New Year. Following the lockdown of Wuhan, the entire province was soon forced into a state of complete closure.

It was to become the most unforgettable Spring Festival of their lives, but a frightening one.

COVID-19 infections skyrocketed in Hubei during the holiday, eventually reaching 65,187 cases on Feb 26 last year, with no cure for the virus being known. Calls for help from Hong Kong people stranded in Hubei flooded into Fung’s office.

ALSO READ: Nation united in the war on COVID-19 pandemic

A 41-year-old mother surnamed Chow was one of the callers. She and her daughter were stranded in the city of Yichang with only instant noodles and milk for food. To make things worse, her daughter, who suffered from epilepsy, would soon run out of medication.

Nineteen-year-old Tom Lee also called. He had the 2020 Hong Kong Diploma of Secondary Education Examination to write to qualify for university entrance. Now he feared the virus had devastated his hopes for the future.

“Most of the callers were anxious to get back to Hong Kong,” Fung said. “And the calls were nonstop.” There were hundreds of calls every day. Apart from the desire to leave, they asked for all sorts of support, including medicine, masks, food, daily necessities, etc. “Sometimes their emotions were highly unstable, which was difficult for the handful of colleagues receiving calls.”

Chances for anyone getting back to Hong Kong in the short-term were slim. The 4,000-plus Hong Kong residents were scattered all over the province — some as far as 500 kilometers from Wuhan. No way could they get there, let alone Hong Kong. Ground transportation was cut off between cities, and only essential services, medical employees and food delivery trucks were allowed on the roads. In order to help the Hong Kong people in need, Fung led his small team to arrange all sorts of essential supplies, medicine and masks in particular, for ensuring their survival. He made extra efforts to assist those unfortunate ones who were infected, which reached 14 in total.

READ MORE: Hit by the disease: The ordeal of a HK family in Wuhan

Hong Kong, on the other hand, had its own struggles. By mid-February, as the emerging pandemic worsened, most of the city’s quarantine units were occupied, but the local demand kept increasing due to the spread of the disease. This made the evacuation plan for those in Wuhan more complicated.

The Hong Kong Special Administrative Region government, responding to the pleas, sent a total of eight chartered flights to Wuhan on March 4 and March 26. The humanitarian flights were for Hong Kong residents who urgently needed to return home, including those stranded in Wuhan where the pandemic was the most serious, pregnant women, DSE candidates, and those suffering from serious illnesses.

It was a complex operation, involving various government departments in Hong Kong and Wuhan, plus airport operators, airlines and other service providers. Fung’s job was to coordinate with various parties to make sure it worked at the Wuhan side. Part of his challenge was to gather the most desperate, scattered all over the province. With the help of the Hong Kong and Macao Affairs Office of the Hubei provincial government, a trustworthy car rental company was identified for providing point-to-point connections from individual residences to Wuhan Tienhe International Airport. 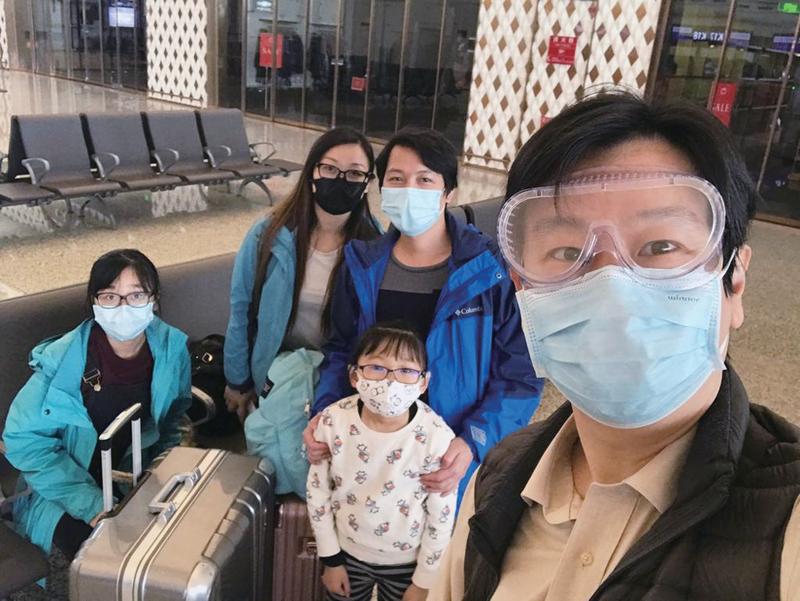 Vincent Fung Hao-yin, director of the Hong Kong Economic and Trade Office in Wuhan, takes a selfie with a Hong Kong family stranded in Hubei province at Wuhan Tianhe International Airport. In order to board the chartered flight on time, the family traveled 500 kilometers overnight. (PHOTO PROVIDED TO CHINA DAILY)

For each chartered flight, it took about four to five buses plus 30 private cars, to ferry the Hong Kong residents stranded in different cities in Hubei to the airport in time.

“Arriving at the airport is half the success. The other half rests in a safe journey home with no cross-infection on the flights,” Fung said. “Anyone who showed up with signs of infection was not allowed to board the planes, but there were still fears that there may be passengers who were asymptomatic.”

He cited the work of officials from the Hong Kong Hospital Authority and Department of Health assigned to attend to pregnant women on the flights.

Thirteen pregnant women flew on the first mercy flight out of Wuhan. One was 39 weeks pregnant.

“The medical team prepared many contingency plans,” Fung said. There was one plan for a pregnant woman found to be infected and another for a woman giving birth on the flight. Two pregnant women went into labor at the same time, he said.

These chartered flights brought back 1,027 Hong Kong residents. Thanks to careful planning, only one after arriving was found to have contracted the virus. Because of the successful operation, the skepticism against those returning from Wuhan died down quickly.

The Wuhan team of the Hong Kong Economic and Trade Office, which helped Hong Kong residents during the 76-day lockdown of Wuhan, pose for a photo at Wuhan Tianhe International Airport. (PHOTO PROVIDED TO CHINA DAILY)

Grateful with no regrets

On the night the first charter flights took off, Fung treated his small team to a big dinner, calling it a “celebration for the half-success.” Foods were prepared by a restaurant owned by a Hong Kong businessman. Like Fung, he stayed in the city and his restaurant delivered meals for medical employees fighting at the frontline during the lockdown period.

After 76 days of lockdown, Wuhan reopened on April 8. None of Fung’s 20-plus employees was infected. Looking back, Fung mocked himself that he had four “gettings” — his hair getting longer, blood pressure getting higher, the skin condition of his hands getting worse, and his weight getting lighter. More importantly, he was touched by the kindness of people in and out of the city.

He recalled Tse Chun-ming, founder of the Hong Kong-funded Wuhan Asia General Hospital, who told him the hospital will do all it could to admit infected Hong Kong patients. He recalled his Wuhan friend, who sent him fresh vegetables when he had been out of them for several days. He also recalled his Hong Kong friends who sent him masks and other protective gear during the lockdown. 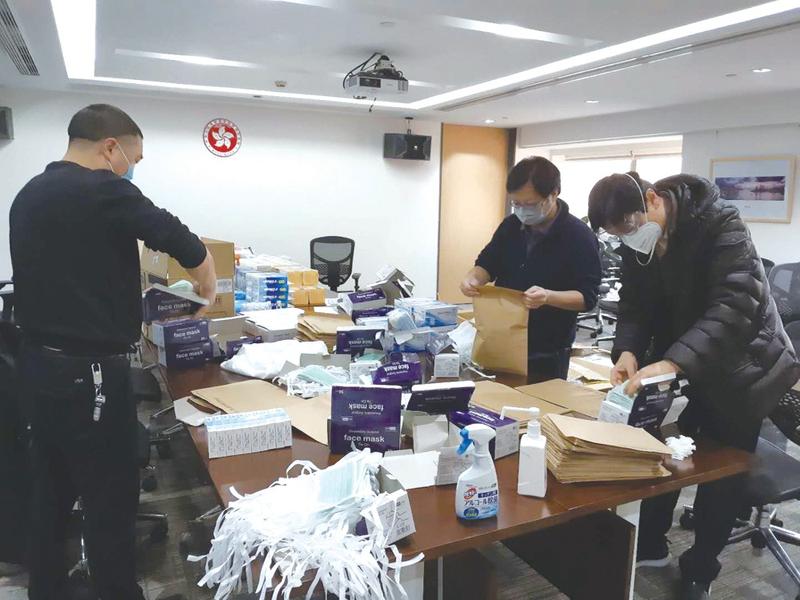 “When the pandemic hit Wuhan, it was at first chaotic, and people were confused and frightened,” Fung said. “Then a lot of volunteers stepped out. Some assisted the local officials to provide services to the community, some volunteered to drive the medical workers to and from hospitals, and some even drove patients to hospitals — in full protective gear. We saw a lot of instances like that. Solidarity and mutual support are very important.

“We need to help each other, and stay united. If you go to Wuhan now, one year after the pandemic, and ask its residents about their biggest takeaway from the experience of fighting the pandemic, they will tell you the same,” Fung said.

READ MORE: At the epicenter: A HK businessman’s battle in Wuhan

Fung left his post as director of the Wuhan office in October and now serves as deputy head of the Policy Innovation and Co-ordination Office of the HKSAR government.

He is still a government official, but Fung said he is a different version of himself now. He had no regrets about his mission in Wuhan, and always felt grateful to his family, colleagues, and the people of that city.

Chen Zimo contributed to the story.