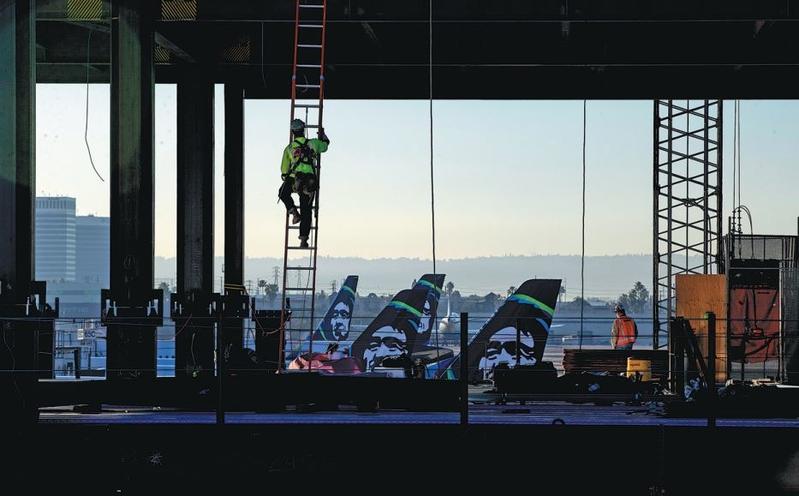 In this undated photo, an expansion project is carried out at Los Angeles International Airport in the United States. (PHOTO PROVIDED TO CHINA DAILY)

United States President Joe Biden has recast what has traditionally been considered infrastructure with a US$2.3 trillion plan that includes money for jobs programs and caregivers, in addition to bridges and highways.

However, the word "infrastructure" is not included in the sweeping proposal's title.

Called the American Jobs Plan, it also proposes spending billions of dollars on affordable housing, help for schools and labor unions and expanding high-speed internet services, among numerous other priorities.

In a nod to climate awareness, Biden's plan puts development of the electric vehicle industry ahead of any other transportation category. He also wants to spend US$10 billion to create a Civilian Climate Corps.

"It's a once-in-a-generation investment in America unlike anything we've seen or done since we built the interstate highway system and the space race decades ago. In fact, it's the largest American jobs investment since World War II," Biden said on March 31 when he announced the plan in Pittsburgh, Pennsylvania.

The largest single category of expenditure would be US$400 billion toward "expanding access to quality, affordable home－or community-based care for aging relatives and people with disabilities", he said.

The jobs programs and other categories, some of which appear to be geared toward Democratic voting constituencies, could result in no Republicans in Congress supporting the measure.

House Republican Leader Kevin McCarthy of California said in a statement on Thursday, "Like his so-called COVID bill that spent less than 9 percent to defeat the virus, Biden's so-called infrastructure plan spends less than 6 percent to repair bridges, highways and roads.

"The rest is a 'kitchen sink' of wasteful progressive demands, payoffs for labor unions and radical environmentalists, and job-killing regulations that (New York) Representative Alexandria Ocasio-Cortez recently likened to the Green New Deal."

Philip Bump, a correspondent for The Washington Post, said Biden's plan adopts current political trends, such as the Green New Deal, and blends them into a larger, and what the White House hopes, is a more politically palatable package.

Green New Deal proposals call for public policy to address climate change, along with achieving other social aims such as job creation and reducing economic inequality. The name refers to the New Deal, a set of social and economic reforms and public works projects undertaken by US President Franklin D. Roosevelt in response to the Great Depression.

To fund the package, Biden would undo a signature policy of the Trump administration by raising the corporate tax rate to 28 percent from 21 percent.

Senate Republican Leader Mitch McConnell of Kentucky said on April 1: "I don't think the American people gave them a mandate to drive our country all the way to the political left. I'm going to fight them every step of the way, because I think this is the wrong prescription for America.

"That package that they're putting together now, as much as we would like to address infrastructure, is not going to get support from our side, because I think the last thing the economy needs right now is a big, whopping tax increase." 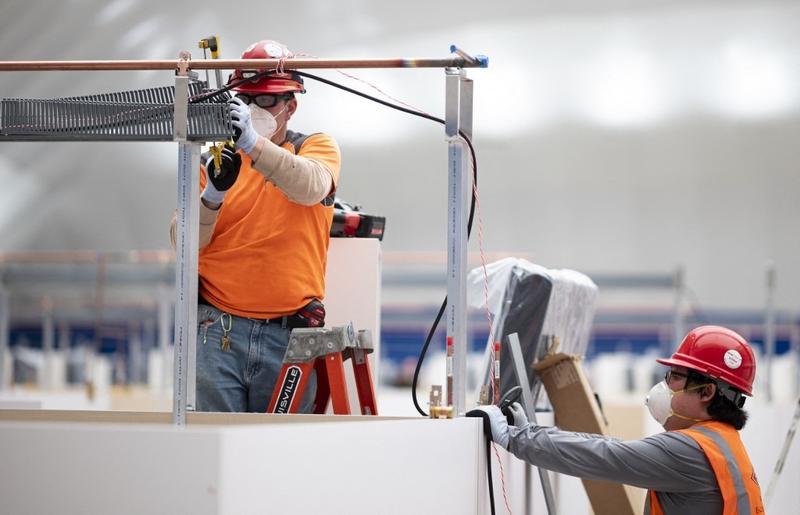 Workers are seen in the New York-Presbyterian's Northern Manhattan Field Hospital, which is under construction inside Columbia University's Baker Field Athletic Complex on April 11, 2020 in New York City. (PHOTO / AFP)

"What do you think would happen if they found out all the lead pipes were up on the Capitol every time they turned on the water fountain," Biden said.

The president's plan includes US$45 billion to replace all lead pipes used in water distribution.

In a briefing on April 1, White House Press Secretary Jen Psaki said, "Does he (McConnell) disagree that our nation's infrastructure is outdated and needs (to be) repaired?

"Does he disagree that one-third of the country, which doesn't have broadband access, should have access to broadband? There are a lot of areas where there is agreement … across the political spectrum, from investment and infrastructure, doing more to be competitive with China, and what we're really talking about here is how to pay for it," she said.

According to a new Morning Consult/Politico poll, 54 percent of voters said they support making improvements to infrastructure in the US, funded by taxes on those making more than US$400,000 per year and with increases to the corporate tax rate. Another 27 percent said they support improving infrastructure, but only if it can be done without higher taxes.

Some 73 percent of Democrats were likely to support tax increases to fund the projects, compared with 32 percent of Republicans.

Underscoring sharp political divisions in the US, some Democrats in the party's progressive wing said the program should do even more.

Ocasio-Cortez posted on Twitter: "This is not nearly enough. The important context here is that it's US$2.25T spread out over 10 years. For context, the COVID package was US$1.9T for this year *alone,* with some provisions lasting 2 years."

Representative Pramila Jayapal, a Democrat from Washington state, tweeted on April 1: "Let's not water down a bill for a party that's not actually interested in bipartisanship or wait for Republicans to have some awakening on climate change. Let's move with the urgency and boldness that this moment calls for."

To pass the package without Republican support, Democrats could resort to a budgetary process called reconciliation to get around the 60-vote threshold typically needed for advancing legislation in the Senate. However, there are limits on how many times the procedure can be used each year. The Senate is split 50-50; US Vice-President Kamala Harris, though, can break a tie in favor of Democrats with her vote.

The Democrats have a 219-211 advantage in the House (five of the 435 seats are vacant), but some in the party from high-cost states such as New York and New Jersey are looking for relief on state and local taxes, or SALT, and have said they would not support legislation that does not include this. Former president Donald Trump capped the limit on SALT deductions on income tax returns at US$10,000.

The top four transportation-related categories in the proposal are electric vehicle incentives (US$174 billion), followed by roads and bridges (US$115 billion), public transit (US$85 billion) and passenger and freight railways (US$80 billion).

The plan does not include any mention of high-speed rail, which Transportation Secretary Pete Buttigieg recently expressed support for.

Biden's plan includes grants for governments and private groups to build 500,000 electric vehicle chargers and replace 50,000 diesel transit vehicles. The initiative is aimed at pushing the country away from internal combustion engines.

Representative Debbie Dingell, a Michigan Democrat, said she wants to ensure that all tax dollars spent on the plan support jobs and production based in the US, such as manufacturing electric vehicle batteries.

"Any US taxpayer money used has to be used for production in this country," she said last week. "We have to be intentional about protecting good-paying American jobs and addressing global climate change at the same time."

Biden also wants to provide US$60 billion for "workforce development".

According to a White House statement: "Structural racism and persistent economic inequities have undermined opportunity for millions of workers. All of the investments in workforce training will prioritize underserved communities and communities hit hard by a transforming economy.

"All of us deserve to enjoy America's promise in full－and our nation's leaders have a responsibility to overcome racial, gender and other inequalities to make it happen. To that end, the president is calling on Congress to create new, good-quality union jobs for American workers by leveraging their grit and ingenuity to address the climate crisis and build a sustainable infrastructure. Increased unionization can also impact our economic growth overall by improving productivity."

Republican Senator Shelly Moore Capito of West Virginia said in a statement: "President Biden's so-called jobs proposal is a clear attempt to transform the economy by advancing progressive priorities in an unprecedented way. The proposal would aggressively drive down the use of traditional energy resources and eliminate good-paying jobs in West Virginia and across the country."

The White House has also said the spending plan is necessary to keep up with China on the global economic stage.

Jonathan Hillman, a senior fellow at the Center for Strategic and International Studies in Washington, wrote last month: "The United States is entering what could be a decades-long competition in which economic and technological power will matter just as much, if not more, than military might. Starting this race with decaying infrastructure is like lining up for a marathon with a broken ankle."

At his first news conference as president on March 25, Biden detailed the gap in infrastructure spending between the US and China.

"More than one-third of our bridges, 231,000 of them, need repairs. … One in 5 miles (8 kilometers) of our highways and major roads are in poor condition. That's 186,000 miles of highway. Aviation－20 percent of all flights weren't on time, resulting in 1.5 million hours lost in production. Six million to 10 million homes in America still have lead pipes servicing their water lines. We have over 100,000 wellheads that are not kept, leaking methane."

In a meeting with lawmakers last month after his call with President Xi Jinping, Biden said: "If we don't get moving, they're (China) going to eat our lunch. We just have to step up."

According to the 25-page statement on the American Jobs Plan: "We are one of the few major economies whose public investments in research and development have declined as a percentage of GDP in the past 25 years. Countries like China are investing aggressively in R&D, and China now ranks number two in the world in R&D expenditures."

Beyond US infrastructure, Biden told British Prime Minister Boris Johnson in a phone call on March 26 that the West should have an international infrastructure plan to rival China's Belt and Road Initiative.

Biden told reporters, "I suggested we should have, essentially, a similar initiative, pulling from the democratic states, helping those communities around the world that, in fact, need help."

The World Bank estimates that China, through the BRI, has already built or pledged US$575 billion to construct energy plants, railways, roads, ports and other projects across the globe.

China also is stressing technology in its infrastructure initiatives. 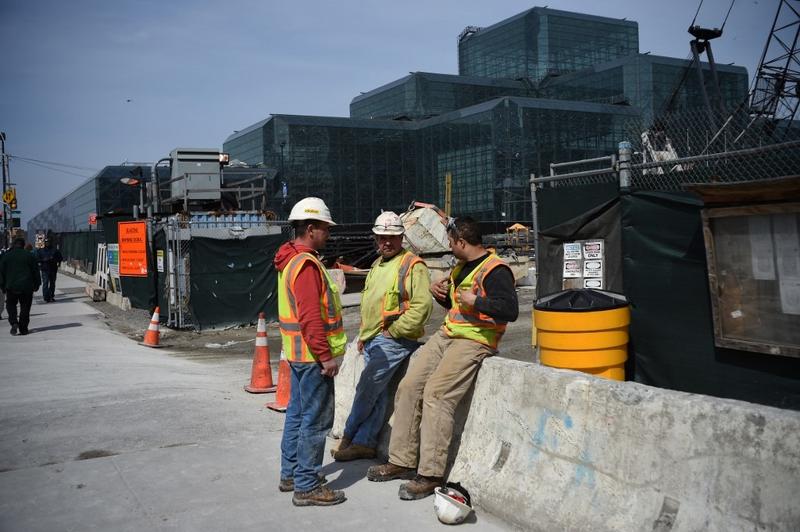 In this file photo, construction workers chat during their break at a building site in New York. (PHOTO / AFP)

READ MORE: Biden the builder sets out on tech road

On March 25, it announced targeted measures to spur new types of consumption, including accelerating new infrastructure construction and pilot programs for digital currency rollout as part of the government's ongoing efforts to boost domestic demand and foster high-quality growth.

According to a document jointly released by the National Development and Reform Commission and more than 20 other departments, the measures include fostering new types of retail businesses, actively developing an internet-powered healthcare sector and boosting development of digital culture and tourism.