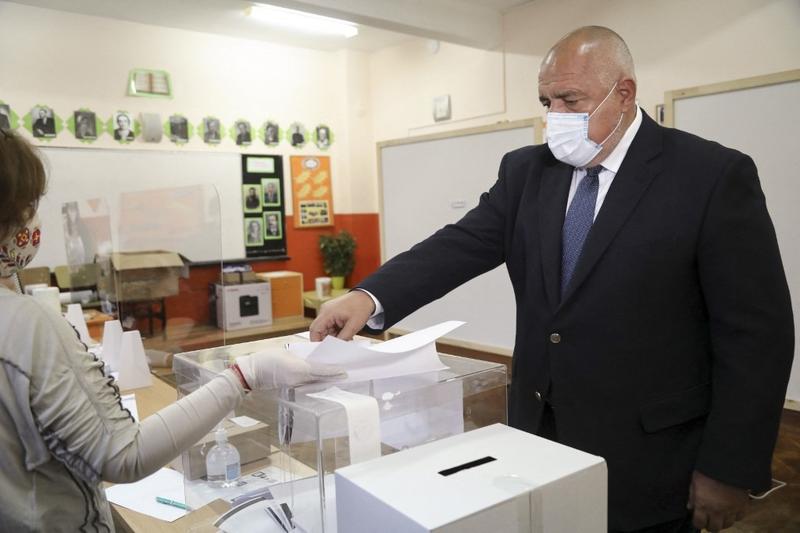 This handout photograph taken and made available by the GERB party press office on April 4, 2021 shows Bulgarian Prime Minister and leader of GERB party Boyko Borisov casting his ballot at a polling station during the parliamentary election in Sofia. (HANDOUT / GERB PARTY PRESS OFFICE / AFP)

SOFIA - Bulgaria’s long-serving prime minister, Boyko Borissov, announced plans on Wednesday to seek a coalition government after his party came first in Sunday’s national election, but he said he was “unlikely to succeed”.

Following a rise in protest parties accusing it of failing to root out corruption, Borissov’s centre-right GERB will be the largest party in the parliament but far short of majority, with some 26.2 percent of ballots won.

In power since 2009, Borissov, 61, has modernized the country’s crumbling roads and kept its finances in check.

But he has also alienated voters and potential allies who see him as the decision-maker who has safeguarded the power of oligarchs in the European Union’s poorest and most corrupt member state.

“We are obliged to our voters, who put us first, to propose an option. From the comments that I hear, this is unlikely to succeed,” Borissov told his outgoing cabinet.

Coming in second in the election with 17.7 percent was a new anti-establishment grouping founded by TV host Slavi Trifonov, who will likely take a shot at forming a government if Borissov fails.

Borissov said on Wednesday he was ready to back Trifonov to form a government to avoid snap polls that could harm Bulgaria’s ability to tap on EU coronavirus recovery funds, battle a surge in new infections and restart its battered economy.

“If they need it, I am ready to have 10 deputies ready to back them. A stable governance is what matters to me. I love my country and want the business to be calm,” Borissov said.

“New election is not a solution,” he said.

Borissov’s new offer comes after two small protests parties and the Socialists who came in third rejected his offer for a technocrat cabinet to lead the country through the coronavirus pandemic until the end of the year.

International observers of the election said the massive use of state resources gave his party a significant advantage, but even that did not prevent it from losing a fifth of its seats.

Trifonov’s There Is Such a People party has repeatedly said it would not get into any governing deal with GERB, the Socialists or the ethnic Turkish MRF party.

On Wednesday, Borissov said if rivals wanted new polls, the best way forward was to agree on a new constitution that could address changes in the electoral system and then call an election for a grand national assembly that should approve it.