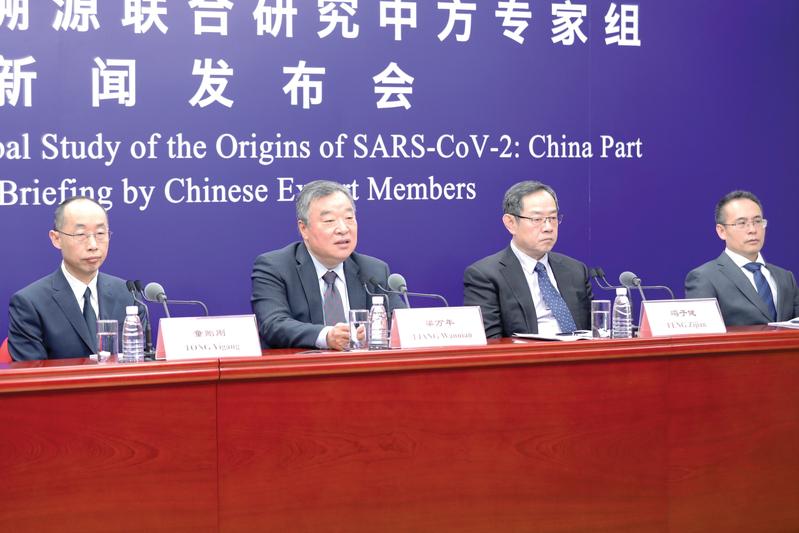 Chinese expert members of a WHO-China joint team introduce the report on the WHO-convened global study of COVID-19 origins at a press briefing in Beijing on March 31. (ZHANG YUWEI / XINHUA)

Chinese experts participating in the joint study tracing COVID-19 origins support further research into earlier cases and clues around the globe as well as expansion of a global database for the pandemic.

Liang Wannian, a Tsinghua University professor who heads the Chinese team of the joint mission, also dismissed claims that China withheld raw data from international experts studying the origin of the novel coronavirus.

Tracing the origin of the novel coronavirus is a work in progress and should be a globe-spanning effort, he said. And experts agree that the place a virus is first reported is not necessarily the virus’ point of origin.

The report released on March 30 by the team of experts from a dozen countries urged expanding the scope of the search to possible early infections as well as potential animal hosts of the virus across the world, a likely pathway of transmission. The role of cold-chain and cold products in aiding transmission was also seen as worth exploring.

The findings showed that “some of the suspected positive samples were detected even earlier than the first case in Wuhan, suggesting the possibility of missed circulation in other countries”, the report said, adding, “Nonetheless, it is important to investigate these potential early events.”

During the Geneva briefing on the report, British zoologist Peter Daszak, a member of the WHO team, said: “Don’t think about national boundaries if we really want to defeat pandemics.

“We have to come together with other countries to focus on how they emerge and try and stop them for the future.”

In Beijing, Liang told the media: “It is false to believe that origin-tracing work should be limited to China. We must pursue a wider perspective.

“It is unrealistic and unnecessary from the point of view of a scientist to go through every single entry in original records,” he said. “We must first establish a database that can be further examined.”

The 120-page report published by the joint mission “will withstand the test of history”, Liang said. “The team is confident that the report is based on all available documents and evidence on hand.”

The report said that the virus most likely jumped from an animal, potentially a bat or pangolin, to humans through an intermediary species. It also suggested establishing a global database integrating information including genome sequencing, epidemiology, and animal and environmental monitoring data.

“To pinpoint the origin of virus is extremely complicated, because a pathogen’s introduction into the human population is a highly accidental event,” Liang said, adding that the high rates of asymptomatic COVID-19 cases have compounded the difficulties.

The coronaviruses most highly related to SARS-CoV-2 are found in bats and pangolins. However, neither of the viruses identified so far from these mammalian species is sufficiently similar to SARS-CoV-2 to serve as its direct progenitor, Liang said.

In addition to these findings, minks and cats are found highly susceptible to the COVID-19 virus.

Professor Dominic Dwyer from the University of Sydney, also a member of the WHO team, said in February that the WHO mission was only phase one of the investigation. “Investigators will also look further afield for data, to investigate evidence the virus was circulating in Europe, for instance, earlier in 2019,” he noted.

Liang stressed that data sharing throughout the mission convened by the World Health Organization has been thorough and comprehensive as Chinese and foreign experts had the same access to data.

“There is no difference between what we had obtained and what foreign team members had on hand,” he said at a news conference in Beijing. “The hypothesis that China did not share raw data is unfounded.”

Liang added that some data that concerned the privacy of patients was not allowed to be taken overseas or photographed based on Chinese laws and international rules, but they were available to the entire team during their on-site visits.

He said whether more origin tracing teams will be dispatched to China should be determined by practical and science-based evaluations.

In response to the suspicion surrounding COVID-19, David Heymann, professor of infectious disease epidemiology at London School of Hygiene and Tropical Medicine, told Xinhua in a recent interview, “There’s always an attempt by countries to blame another country for something which happens.”

“I can’t stress enough how rewarding a process the trip has been. It went beyond all expectations in many ways,” said Thea Kolsen Fischer, also a WHO team member, in February. “When we have had discussions in the expert team, it has only been based on data and documentation.”