By Zhao Ruinan in Beijing and Wang Xu in Tokyo 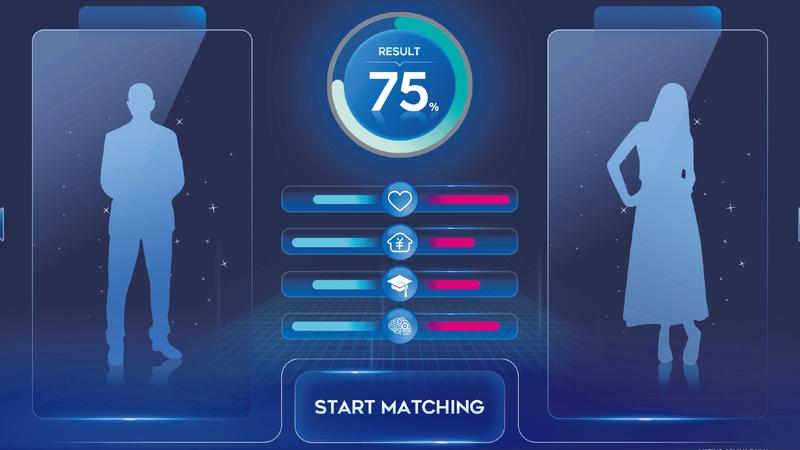 Richard Koide, a 35-year-old chemical engineer living in Japan, switched to making blind dates online in January, when the country was experiencing a third wave of COVID-19 cases.

This month, as he uploaded his profile to a fourth dating app, he said he is torn between his desire to find love and fears about the pandemic.

"If it is not controlled (in Japan), I will be scared to meet other people," said Koide, who lives in Saitama prefecture, just north of Tokyo.

Stating that he has a preference for "natural, in-person chemistry", he added that before the pandemic emerged, he had never used dating apps.

"The dilemma of having too much choice, the quality of such matches, and chatting with someone for weeks before meeting them in person put me off such apps," Koide said.

However, it did not take long for him to change his mind.

In Japanese, the word "koi" translates as "love", and on its website, Koitama states its aims by using the words: "Let's love in Saitama."

Koide said: "It feels different from other dating apps. For one thing, it uses artificial intelligence to help people find love. Also, because it is a government-led program, there are all kinds of requirements aimed at making people feel safe, such as having to provide proof that you are single.

"Only people living in or wanting to move to Saitama can use the app, but they have to pass an initial interview."

As one of Japan's latest efforts to boost its tumbling birth rate, the rapidly graying nation has turned to AI for matchmaking, and Koitama is the local version of the central government's latest campaign.

Tetsushi Sakamoto, the minister in charge of dealing with the country's declining birth rate, told a news conference in December, "We are planning to offer subsidies to local governments operating or starting up matchmaking projects that use AI.

"We hope this support will help reverse the decline in the nation's birth rate."

According to Japan's Cabinet Office, the central government plans to allocate 2 billion yen (US$19 million) this year to support local authorities that run programs to help residents find love.

This news went viral when it was announced three months ago, with comments on Twitter linking it to the Japanese romantic animation series Love and Lies.

The series depicts a future Japan dominated by AI matchmaking. In an attempt to raise the birth rate, teenagers who have turned 16 are assigned by the government to a partner based on a compatibility calculation.

Although such a world is far from reality, AI has helped young people find potential partners.

According to local media reports, some matchmaking services only consider criteria such as income and age, producing a result if there is an exact match.

AI, with its more sophisticated analysis of forms on which people submit their personal details, takes into account factors such as hobbies and values.

Matchmaking services based on AI have been offered in Saitama prefecture since 2018. As of December, 33 out of 71 couples who used such services eventually married each other.

About half of Japan's 47 prefectures offer matchmaking services and some jurisdictions have already introduced AI systems.

Kenichi Yoshida, who is in charge of the Saitama prefectural government's matchmaking program, said, "People tend to focus on the qualities (they look for in a partner) and their looks, but AI increases their range of choices because it recommends those who may not fit the mold."

Before the Japanese government started to use AI to play cupid for lovelorn residents, konkatsu (marital activities or spouse-hunting) had been a popular trend in the country since the start of this century.

Sociology professor Masahiro Yamada, who created the concept of konkatsu in 2007, argues in his book Konkatsu Jidai (The Era of Marriage Hunting) that before the 1990s, most young people in Japan could easily find a marital partner when they were younger than 30.

However, things have changed since those days. It has become more difficult for young people to meet a potential marital partner, and if they do not act, they may miss this chance.

Yamada believes Japan has entered an era in which young people need to become more proactive in their quest for a partner.

The konkatsu movement emerged as a result of Japan's economic woes in the years after the country witnessed large asset price bubbles in its stock and commercial real estate markets in the second half of the 1980s. These bubbles peaked in 1989 and 1990 respectively.

In 2008, konkatsu was nominated as one of Japan's buzzwords of the year.

Konkatsu may appear at first sight to be a happy and light-hearted journey in pursuit of romance, but this is no easy task. Those turning to konkatsu usually post their profiles on a wide range of matchmaking platforms to reach more single people.

They also socialize at gokon events (parties at which singles meet), create accounts on dating apps, browse the apps frequently to find a match, and register for counseling services provided by professional matchmaking agencies.

A 28-year-old Chinese living in Osaka, who wanted to be named only as Aizome, said gokon are a popular way for young people to search for romance in Japan.

"Konkatsu activities are also useful. Young people in Japan are usually very busy at work. For them, getting to know a member of the opposite sex is not easy," said Aizome, who works as a photographer.

"Japanese tend to be polite, reserved and usually keep a distance when socializing with strangers. As a result, konkatsu has slowly gained traction as the first step for potential couples to find each other, which is still a better option than staying in and rarely getting to meet new people."

Aizome headed to a gokon party in summer 2019 after she discovered information about the event on Google and paid a registration fee of about 3,000 yen.

Gokon, which usually take place in restaurants and bars, center on socializing with the opposite sex while enjoying food and drink. There are no set rules for the number of participants, but groups of five or six men and women are the norm.

At the party Aizome attended, there were five men and five women. The event lasted more than two hours, starting with introductions, where participants talked about their jobs, hobbies and where they grew up.

"Everyone had to perform an activity they were good at. Some participants sang or danced. The women were more active than the men. After the introductions, we ate and chatted," Aizome said.

The last step for participants is to leave their contact details with a potential partner.

Aizome exchanged her details with a young man after the event and they later arranged a dinner date. However, romance failed to blossom, as she discovered that he was not her type. They never met again.

While the pandemic has put a halt to offline matchmaking since last year, finding romance in cyberspace is gaining ground.

Aizome said many Japanese have joined Koide, the chemical engineer, in turning to online platforms to find love.

"The pandemic has dealt a huge blow to Japan's offline matchmaking services. It's impossible for agencies to organize any face-to-face meetings when restaurants are ordered to close before 8 pm," she said.

According to Statista, the market data statistics portal, the market size of online matchmaking services for dating and marriage-seeking in Japan last year reached 62 billion yen, up from about 26 billion yen in 2017. The market is forecast to grow by about 70 percent from last year to 2025.

However, this trend has failed to reverse the country's declining birth and marriage rates.

Japan's population is declining at one of the fastest rates globally. In 2019, the number of births fell to about 865,000, the lowest annual figure ever, with a drop in the number of marriages and a rise in the age at which couples tied the knot both playing a part.

More than 35 percent of Japan's population is expected to be 65 or older by 2050, and the low birth rate is likely to deepen a demographic crisis in the rapidly aging nation.

Erbiao Dai, vice-president of the Asian Growth Research Institute in Fukuoka, said, "There are many reasons for the country's super-low birth rate, including shrinking employment opportunities for men and a huge gender division when it comes to household duties and childcare."

According to Dai's research, in 1960, some 97 percent of men ages 25 to 29 were employed in Japan, but by 2010, that proportion had dropped to 86 percent. Now, many young men who are employed are in temporary jobs, which likely affects their marriage prospects.

"Men's limited and precarious employment opportunities make them poor candidates for marriage. As a result, uncertainty about earnings and employment have played a particular role in the high incidence of virginity among young Japanese men, suggesting they still consider themselves as breadwinners," Dai said.

"On the other hand, the persistence of a traditional gender division for labor in Japan that places heavy obligations on women for household duties and childcare also played a part."

A study by Noriko Tsuya, a professor of demography and social statistics at Keio University in Tokyo, showed that Japanese wives of childbearing age spent an average of 27 hours each week on household tasks, compared with an average of 3 hours per week for husbands. The wives' tasks in the study excluded childcare.

"For example, if a mother takes her child to a park, she has to be friendly with other mothers and be a part of the circle. Kindergartens also frequently organize parent-child activities, such as cooking, among others. All these come at a high cost in terms of money and time, which may add to the pressure exhausted young people in Japan are facing," she said.

Aizome added that many young people, especially those who have completed higher education and are earning good salaries, prefer to live alone, without any financial burdens or emotional crises.

Data from Japan's Ministry of Health, Labor and Welfare show that more than 33 percent of households in the country have been home to lone occupants since 2015, and the proportion is continuing to rise.

According to research conducted in 2015 by a professor from the University of Wisconsin-Madison in the United States, from 1985 to 2010, the number of people ages 20 to 39 living in a single-person household in Japan rose by 19 percent among men and by 89 percent among women.

Japan's National Institute of Population and Social Security Research forecasts that people living alone will comprise nearly 40 percent of the country's households by 2040, citing delayed marriage, no marriage and a rise in divorces as the main reasons.

Aizome said that although AI can improve efficiency and reduce costs incurred in setting up blind dates, it might not play a significant role in raising marriage and fertility rates in Japan.

"It may help people when they seize the opportunity to meet others, but if they are not interested in dating and prefer to live alone, matchmaking is unlikely to be effective. AI also cannot control a person's emotional feelings toward someone else," she said.

Dai concluded that it is beneficial to subsidize AI matchmaking services, but there are more economic and effective ways for the government to raise the birth rate.