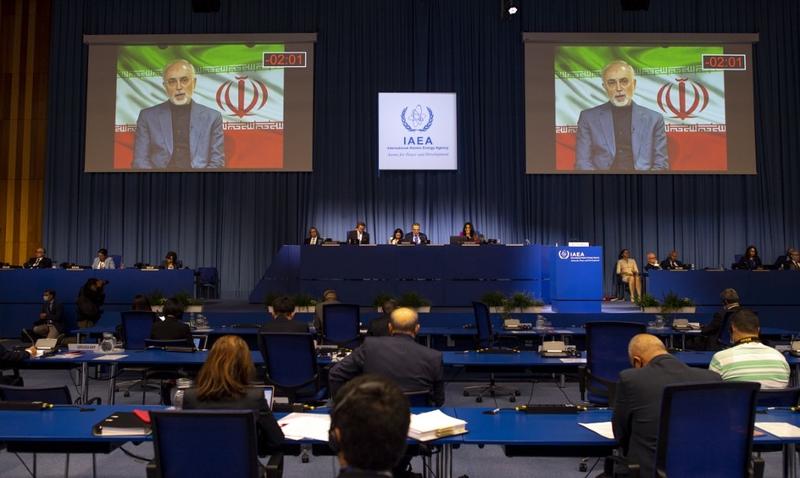 Mohammad Javad Zarif, Iranian foreign minister, is seen speaking on a screen as he attends virtually the 64th General Conference of the International Atomic Energy Agency (IAEA) at its headquarters in Vienna, Austria on September 21, 2020. （JOE KLAMAR / AFP）

"As a result of very intensive consultations I had with Iran, Iran has finally welcomed and accepted my initiative to engage in a focused and systematic effort aimed at attempting to clarify a number of outstanding issues," Grossi told reporters after the conclusion of the IAEA's 35-nation Board of Governors meetings this week.

The issues to be discussed include presence of uranium particles and doubts about a certain material that has not been declared by Tehran, International Atomic Energy Agency Director General Rafael Grossi said

The issues will include presence of uranium particles and doubts about a certain material that has not been declared by Tehran, he said.

"The board of governors has welcomed the understanding, this agreement between Iran and the IAEA," he said. "So we are encouraged by this development."

Asked about whether he did the talk with Iran this week to avoid the board of governors issuing a statement in fear of retaliation from Iran, Grossi said that his job is to clarify everything that is outstanding, and the consequences of the action are in the eyes of the beholder.

Grossi emphasised that his agency is trying to go beyond the exchange of letters and messages with Iran, which seemed a lot like "talking past each other."

He hoped that the effort will achieve satisfactory outcome in time for the next regular session of the board of governors in June, and other technical and political meetings will follow, Grossi added.

Also on Thursday, Britain, France and Germany scrapped a US-backed plan for the UN nuclear watchdog’s board to criticise Iran for scaling back cooperation with the agency, diplomats said.

The European powers, all parties to the 2015 nuclear deal, have been lobbying for the IAEA’s 35-nation Board of Governors to adopt a resolution at this week’s quarterly meeting expressing concern at Iran’s latest breaches of the deal and calling on it to undo them.

However, Iran has bristled at the prospect, threatening to end a recent agreement with the IAEA that limits the impact of its latest moves and enables monitoring of its facilities to continue in a black-box-type arrangement for up to three months.

Three diplomats who follow the IAEA closely said the so-called E3 had scrapped their plan for a resolution.

“Cooler heads are prevailing,” said one diplomat from a country on the board that had been sceptical about the proposed resolution. Other countries had expressed concern that a resolution would undermine attempts to rescue the deal.

One diplomat said that would be the subject of the technical discussions, and if Iran’s cooperation was insufficient the plan for a resolution could be revived at the next quarterly board meeting in June.