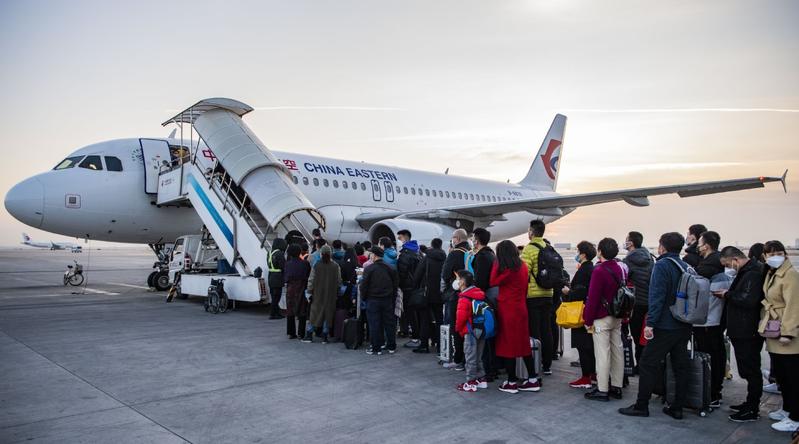 Passengers board a plane at Xianyang International Airport in Xi'an, Shaanxi province, on Feb 6. (PHOTO BY YUAN JINGZHI / FOR CHINA DAILY)

BEIJING－China is leading the global civil aviation industry in recovering from the impact of COVID-19. The nation's economic resilience and growth momentum continue to inspire confidence among multinationals in the aviation industry.

The COVID-19 pandemic hit the global economy hard in 2020.Thanks to effective control methods, China's economy has rebounded and it has quickly re-established domestic air travel. For multinational firms within the sector, this means continuity of business along the whole industrial chain, including aircraft manufacturers, parts suppliers and air-freight carriers.

All in all, multinationals operating in the sector are confident of China's response to the pandemic and the prospects for continued growth here.

The COVID-19 pandemic hit the global economy hard, resulting in a contraction of around 3.5 percent in 2020, according to the International Monetary Fund.

However, China's response to the pandemic allowed it to limit the negative impact, becoming the only major economy to post growth in 2020. China's gross domestic product expanded 2.3 percent in 2020, exceeding the 100 trillion yuan (US$15.5 trillion) threshold for the first time.

The figures on China's civil aviation sector in particular are encouraging. Latest data from the Civil Aviation Administration of China showed that the sector handled 420 million passenger trips in 2020－63.3 percent of the 2019 figure－indicating a recovery from the fallout of the pandemic.

China's civil aviation sector has remained the world's second-largest in terms of passenger trips for the past 15 years, according to the CAAC.

As such, China's civil aviation industry has led the global recovery, particularly with the continued operation of its domestic routes amid a massive reduction in global air travel.

China's civil aviation market has shown its resilience during the pandemic. It has brought confidence to global aviation industry players like Airbus.

Among the multinationals benefiting from China's market recovery is Airbus, which has continued to supply aircraft to China, despite the rocky global economic outlook.

"China's civil aviation market has shown its resilience during the pandemic. It has brought confidence to global aviation industry players like Airbus," said George Xu, CEO of Airbus China.

"China plays a strategic role in the global civil aviation market, and Airbus remains consistent in its commitment to China," Xu said.

Besides selling civil airplanes to the booming market, Airbus has extended its industrial cooperation with China in the manufacturing sector. In 2008, it inaugurated the Airbus A320 family final-assembly line in North China's Tianjin.

Airbus is committed to extending the capacity of its Tianjin facility from the narrow-body A320 single-aisle series aircraft to the wide-body A350 series aircraft, according to the company.

Another multinational that sees great potential in China's civil aviation industry is Honeywell Aerospace. The US-based company sees huge potential for general aviation in western China, and is ready to help provide engines and avionics systems to a wide variety of aircraft being built in China.

"We've seen the rapid growth in the Chinese aviation market in the past decades. I think it will continue to maintain very strong growth momentum for the next few decades as well," said Steven Lien, president of Honeywell Aerospace Asia-Pacific.

Lien said not only are Chinese airlines growing in their competitiveness worldwide, but the country is making strides in its own manufacturing operations, as with the C919 and the ARJ21 passenger aircraft, developed by the State-owned plane-maker Commercial Aircraft Corporation of China.

"We're committed to supporting this market, providing customers with exceptional solutions and equipping local support teams to help them create value and improve efficiency," he said.

"We're confident about the resilience of China's economy and excited about the days ahead. We believe the pandemic will soon be well controlled under quick and effective measures, and people will safely increase their travel again."

The nation's economic resilience has also been good for suppliers of air-cargo services, such as Lufthansa Cargo, which has continued to develop its operations in China despite the pandemic.

"The Chinese government has shown its strength and performance in fighting COVID-19, and the country's economy retains its vitality," said Janet Mi, chief representative of Lufthansa Cargo in China.

Shanghai, one of Lufthansa Cargo's biggest destinations outside Germany, is also home to one of its global hubs for transporting pharmaceuticals. The Shanghai hub has recently completed the cold-chain transportation infrastructure covering diversified temperature ranges for frozen vaccines.

"China is one of Lufthansa Group's key strategic markets worldwide. It is a massive market and committed to further opening up. We are confident in it and will extend our presence here," Mi said.