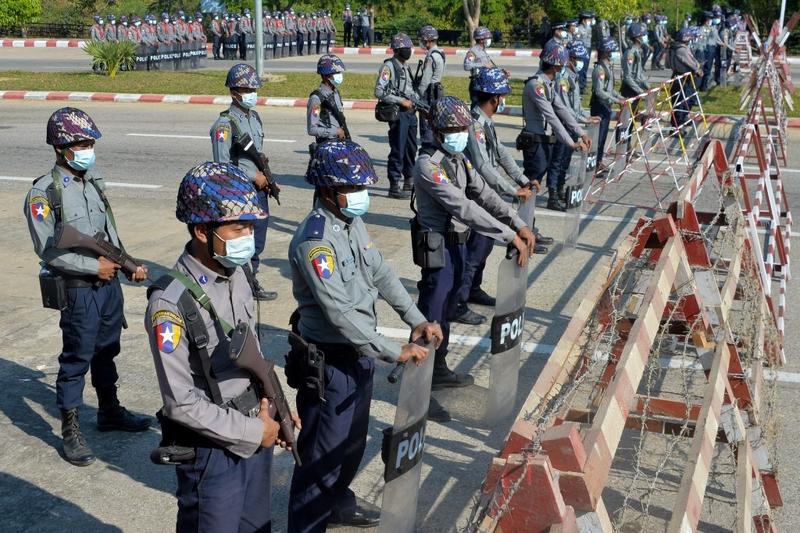 Police take up positions along a road in Naypyidaw, Myanmar, on Jan 29, 2021, ahead of the reopening of the parliament on Feb 1 following the November, 2020 election which Aung San Suu Kyi's ruling National League for Democracy (NLD) won in a landslide. (THET AUNG / AFP)

YANGON - Myanmar members of parliament are set to take up their seats on Monday as escalating tension between the civilian government and the powerful military stirs fears of a coup in the aftermath of an election the army says was fraudulent.

The army has said it plans to "take action" if its complaints about the election are not addressed and a spokesman this week declined to rule out the possibility of a coup.

Aung San Suu Kyi's National League for Democracy (NLD) won a resounding victory in the Nov 8 poll, only the second free and fair general election since the end of direct army rule in 2011.

But allegations by the army of widespread voter fraud, which the electoral commission denies, have led to the most direct confrontation yet between the civilian government and the military, who share power in an awkward constitutional arrangement.

The charter reserves 25 percent of seats in parliament for the military, which has demanded a resolution to its complaints before Monday and has refused to be drawn on whether its lawmakers will show up.

Adding to the uncertainty, the commander-in-chief, Senior General Min Aung Hlaing, mentioned during a widely publicized video address to military personnel on Wednesday that a constitution should be repealed if it was not abided by.

He cited previous instances when charters had been abolished in Myanmar.

Suu Kyi has not made any public comment on the dispute but a spokesman for her NLD said members had met military leaders on Thursday for talks but noted they were "not successful".

"We do have concerns but they are not too significant," the spokesman, Myo Nyunt, said by telephone, explaining how they had anticipated some tension due to the NLD's plan to amend the constitution after the vote to curb the power of the military.

He also said police battalions were stationed in the capital, Naypyitaw, after reports that protesters might gather there but said in the event of a coup the NLD would not respond with force.

NLD lawmaker Zin Mar Aung said police were patrolling the parliament compound and there was a need for caution.

"We cannot pretend as if nothing is happening," Zin Mar Aung said by telephone.

A military spokesman did not answer phone calls seeking comment.

In a statement, UN Secretary-General Antonio Guterres called on "all actors to desist from any form of incitement or provocation, demonstrate leadership, and to adhere to democratic norms and respecting the outcome of the 8 November general election"

United Nations Secretary-General Antonio Guterres said on Friday he was following the developments in Myanmar with "great concern".

In a statement, Guterres called on "all actors to desist from any form of incitement or provocation, demonstrate leadership, and to adhere to democratic norms and respecting the outcome of the 8 November general election."

"All electoral disputes should be resolved through established legal mechanisms," he added.

In a separate statement, Western nations said they were looking forward to the "peaceful convening" of parliament on Monday.

"We urge the military, and all other parties in the country to adhere to democratic norms, and we oppose any attempt toalter the outcome of the elections or impede Myanmar's democratic transition," reads the statement signed by the embassies of Australia, Britain, Canada, the European Union and United States, among others.

Religious and political leaders speaking to media have urged the sides to resolve the dispute peacefully.

"We must all cooperate to achieve peace and to build a democratic federal system," Reverend Dr Hkalam Samson, a community leader from the Kachin ethnic minority, told the Irrawaddy news journal.

"Coup is a bitter word that we don’t want to hear," he said.

Author and historian Thant Myint-U said on Twitter on Thursday the country was heading towards a constitutional crisis.

"I don't think anyone can say with any certainty what might happen over the next three days," he said.

"What’s likely is that Myanmar’s veering towards its most acute constitutional crisis since the abolition of the old junta in 2010."

A youth leader for the NLD, who asked not to be identified, said many people had a real fear of return to military rule and it was frustrating to see elites "bickering for individual power”.

"Military leaders are already far more rich and powerful than anyone would ever need to be, at least their wealth has probably grown the most since the country's opening up, but all of that is still not enough," said the youth leader.