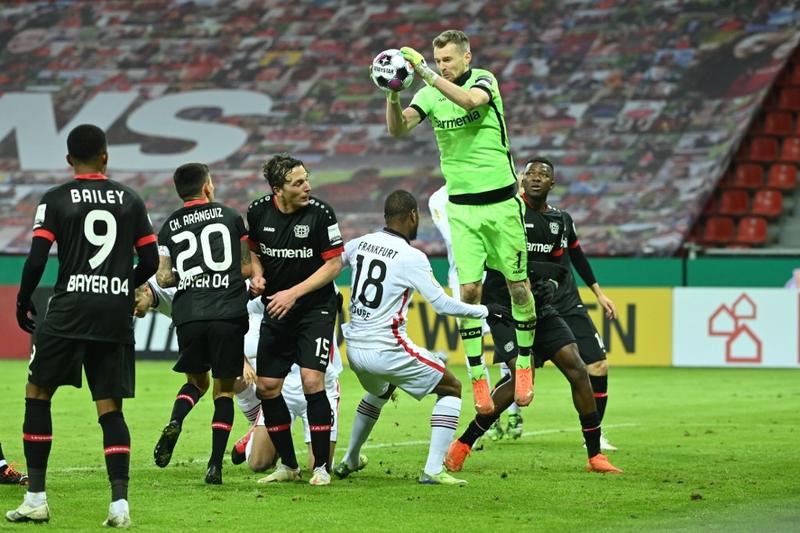 BERLIN - Ten-men Bayer Leverkusen came from behind to ease past Eintracht Frankfurt 4-1 to progress into the round of the last 16 of the German Cup on Tuesday.

The hosts ensured a perfect start on the road as they needed only six minutes to open the scoring after Amin Younes finished off Andre Silva's square pass from inside the box.

Leverkusen should have added more goals to its lead, but neither Demirbay nor Moussa Diaby could beat goalkeeper Kevin Trapp despite good opportunities

At the other end of the pitch, Silva had the chance to double Frankfurt's lead moments later, but Leverkusen custodian Lukas Hradecky defused the dangerous effort.

Both sides continued to trade attacks, but it was a handball penalty that restored parity for Leverkusen as Lucas Alario overcame Trapp from the spot in the 27th minute.

Leverkusen increased the pressure and reaped a promising chance in the dying minutes of the first half when Wendell's hammer from 23 meters forced Trapp into the action.

After the restart, Frankfurt grabbed a better start into the second half as Aymen Barkok's deflected shot challenged Hradecky.

The goals were scored at the other end of the pitch, though, as Kerem Demirbay's free-kick into the box allowed Edmond Tapsoba to turn the tide with a header four minutes into the second half.

Leverkusen should have added more goals to its lead, but neither Demirbay nor Moussa Diaby could beat Trapp despite good opportunities.

The "Werkself" eventually took the wind out of Frankfurt's sails with 67 minutes played as Amiri's through ball found Diaby, who tapped home to lead 3-1.

Peter Bosz's men had to continue with ten-men from the 73rd minute. Still, they made it four as Diaby completed a counterattack to seal the deal in the 87th minute.

With the result, Bayer Leverkusen clashes with fourth division outfit Rot-Weiss Essen in the round of the last sixteen on February 2. Meanwhile, the "Eagles" will have to focus on the Bundesliga.

"We did not start very well into the game. We had to fight to gain a foothold into the match, and that is what we did. It was important that we came back today," Bayer Leverkusen head coach Peter Bosz said.