Bayern knocked out of German Cup by second-tier Kiel 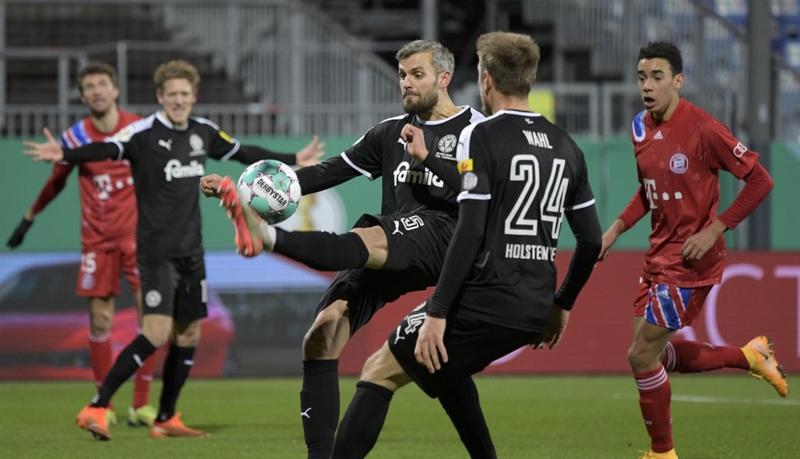 BERLIN - Bayern Munich crashed out in the German Cup second round for the first time in 20 years after Holstein Kiel stunned the giant 6-5 on penalties after a 2-2 draw on Wednesday.

Bayern conceded an equalizer in injury-time through Hauke Wahl, who forced the title holders into extra-time.

It took another five minutes before Bayern scored the opener, as Serge Gnabry broke the deadlock with the helping hand of Holstein goalkeeper Ioannis Gelios, who tipped the ball into the path of the German international.

The German giants remained in control of proceedings but failed to turn dominance into tangible reward, as Gnabry pulled wide from a promising position at the half-hour mark.

Kiel grew in confidence and thought it had turned the tide but Lee Jae-sung's finish into the bottom corner was flagged offside.

Bayern tried to assume control, but the visitors could only create half-chances through Alphonso Davies and Corentin Tolisso, and had to take a 1-1 draw into the break.

The defending champions made a bright start to the second half and took a 2-1 lead in style as Leroy Sane's perfectly curled free-kick over the wall ended up in the top-right corner.

Courageous Kiel continued unfazed and should have made it 2-2, but an unmarked Alexander Muhling missed the target from 10 meters in the 50th minute.

Gelios kept his squad in the match after tipping wide Jamal Musiala's well-placed shot from inside the box on 66 minutes.

As the match progressed, Bayern took the reins but Kiel had the last laugh with the equalizing goal in the dying seconds of injury-time, when Johannes van der Bergh's cross was turned in by Hauke Wahl's right shoulder to make it 2-2.

All Kiel players kept their nerves from the spot, whereas goalie Gelios saved Marc Roca's attempt. Kiel veteran Bartels took the decisive kick and made no mistake, beating Neuer to wrap up the 6-5 win.

"It was an outstanding performance from my team. We believed in a victory and we had luck. We remained cool despite every setback and even during the penalties. That was crucial today," Holstein Kiel head coach Ole Werner said.

Said Bayern Munich head coach Hansi Flick, "We are of course very disappointed. We dominated but we still conceded a late goal and that is very annoying. Congrats to Kiel, they fought very hard. We have to improve things."