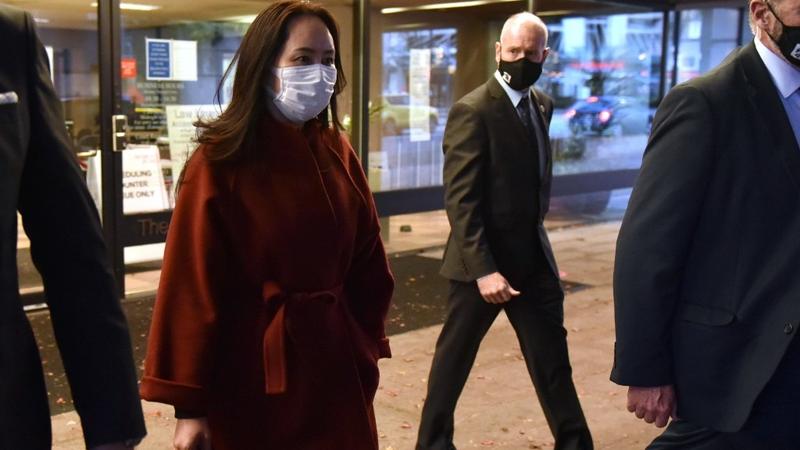 An executive for Chinese tech giant Huawei facing extradition to the United States on alleged fraud charges on Tuesday asked a Canadian court to ease her bail conditions, citing fears she may get infected with COVID-19.

Huawei chief financial officer Meng Wanzhou's husband Liu Xiaozong, speaking in English with the aid of an interpreter, testified on the stand that Meng is fearful of catching the coronavirus from her security guards, which were ordered by a judge for the duration of her extradition fight.

He said she may be "at increased risk from COVID-19" because of her hypertension and past thyroid cancer surgery.

Since the start of the outbreak, he said: "I would usually observe three (guards) accompanying my wife in their vehicle... and (it) could be three different people from one day to the next."

Meng, 48, must wear a tracking bracelet on her ankle while she is outside her home. She is currently confined to the Vancouver area outside of the airport zone and is subject to continuous monitoring.

Lawyers for Meng, who has been out on US$7.9 million bail, want her to be able to leave her residence without being accompanied by guards in non-curfew hours from 6 am to 11 pm.

The two-day hearing in Vancouver is being conducted by Justice William Ehrcke, the judge who set the current bail conditions in 2018.

But Canadian prosecutors object to the application.

The main extradition hearing will resume on March 1 in the British Columbia Superior Court under Justice Heather Holmes.

Huawei chief financial officer Meng Wanzhou's husband Liu Xiaozong, speaking in English with the aid of an interpreter, testified on the stand that Meng is fearful of catching the coronavirus from her security guards, which were ordered by a judge for the duration of her extradition fight

Meng was arrested by Canada at the request of the US on Dec 1,2018, at the Vancouver International Airport. She is accused of bank fraud for allegedly misleading HSBC to break US sanctions against Iran, which Meng and Huawei have denied.

As part of an abuse of process claim, Meng's lawyers have been arguing that her rights were violated when she was detained at the airport two years ago.

He noted the abuse argument also relates to the defense claiming that US President Donald Trump improperly asserted he might intervene in the extradition process if he could get "a better trade deal" with China.

Narwal told the media the defense case was a "multifaceted attack" on the conduct of the extradition proceedings and involves an "unlawful collaboration" between the Canadian and US authorities in collecting evidence against her.

The Wall Street Journal reported last month the US was negotiating with Meng about a deferred prosecution agreement that would allow her to return to China if she admitted wrongdoing in exchange for future charges being dropped.

Gary Botting, an extradition law expert, wrote in the National Post earlier this month that "if Meng admits to wrongdoing, she would have a criminal record and any number of countries (including Canada) could use this against her".

By citing three cases in which he was previously involved, Botting said the US "could be setting a trap" for Meng if she took the deal.

"Ultimately, Meng's name must be struck from the indictment," he wrote in the op-ed article. "Otherwise, even if Canada's minister of justice orders her to be discharged, the US can go after her again and again, whenever she happens to land in a country with which the Americans have an extradition treaty."

In an article "Why Canada Should Finally Free Meng Wanzhou" published in The Walrus, the author said Meng's detention has always been political.

With the Trump administration leaving office and President-elect Joe Biden's inauguration on Jan 20, the Canadian government should not wait to release Meng, the article said.

Xinhua contributed to this story