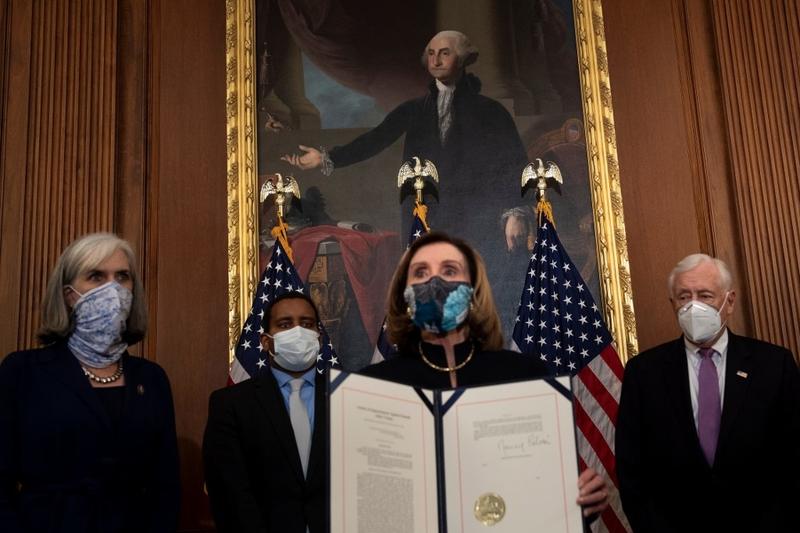 House Majority Leader Steny Hoyer (right) and Assistant Speaker Katherine Clark (left), alongside House Impeachment Manager Representative Joe Neguse, look on as Speaker of the House Nancy Pelosi holds the signed article of impeachment during an engrossment ceremony after the US House of Representatives voted to impeach the US President Donald Trump at the US Capitol, Jan 13, 2021, in Washington, DC. (PHOTO / AFP)

WASHINGTON - Donald Trump on Wednesday became the first president in US history to be impeached twice, as 10 of his fellow Republicans joined Democrats in the House of Representatives to charge him with inciting an insurrection in last week’s violent rampage in the Capitol.

The vote in the Democratic-controlled House was 232-197 following the deadly assault on American democracy, although it appeared unlikely the swift impeachment would lead to Trump’s ouster before his four-year term ends and Democratic President-elect Joe Biden is inaugurated on Jan. 20.

The Senate’s Republican majority leader, Mitch McConnell, rejected Democratic calls for a quick impeachment trial, saying there was no way to conclude it before Trump leaves office.

However, even if Trump has left the White House, a Senate conviction of Trump could lead to a vote on banning him from running for office again.

McConnell told Republican colleagues in a letter Wednesday he would block starting an impeachment trial before Joe Biden takes office Jan. 20 and control of the Senate shifts to Democrats.

McConnell also said he has not yet made up his mind on whether to vote to convict Trump of inciting an insurrection.

Biden said it was important that a Senate impeachment trial in the early days of his term not delay work on his legislative priorities, including Cabinet confirmations, and urged Senate leaders to find a way to do both at the same time.

The House passed a single article of impeachment - a formal charge - accusing Trump of “incitement of insurrection,” focused on an incendiary speech he delivered to thousands of supporters shortly before the pro-Trump mob rampaged through the Capitol. The mob disrupted the formal certification of Biden’s victory over Trump in the Nov. 3 election, sent lawmakers into hiding and left five people dead, including a police officer.

During his speech, Trump repeated false claims that the election was fraudulent and exhorted supporters to march on the Capitol.

In a video statement released after the vote, Trump did not mention the impeachment vote and took no responsibility for his remarks to supporters last week, but condemned the violence. 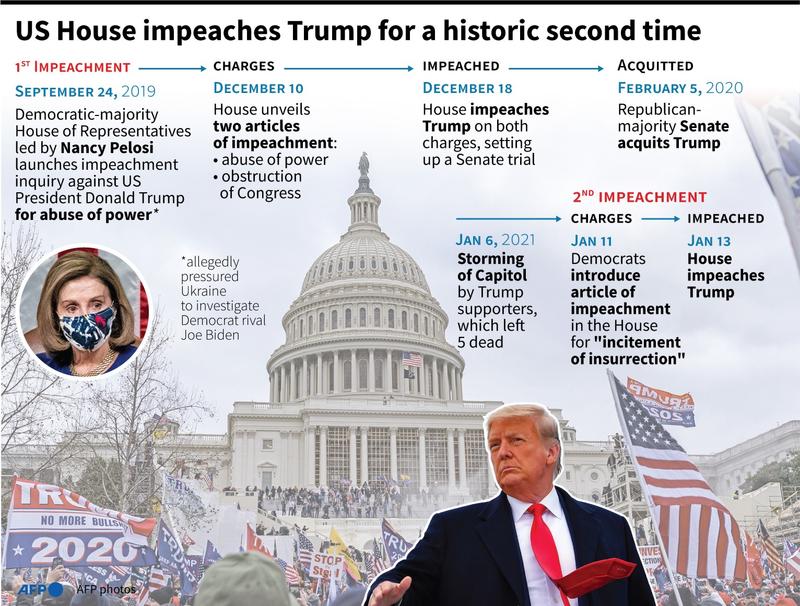 With thousands of rifle-carrying National Guard troops inside and outside the Capitol, an emotional debate unfolded in the same House chamber where lawmakers had crouched under chairs and donned gas masks on Jan. 6 as rioters clashed with police officers outside the doors.

No US president has ever been removed from office through impeachment

“The president of the United States incited this insurrection, this armed rebellion against our common country,” House Speaker Nancy Pelosi, a Democrat, said on the House floor before the vote. “He must go. He is a clear and present danger to the nation that we all love.”

At a later ceremony, she signed the article of impeachment before it is sent to the Senate, saying she did it “sadly, with a heart broken over what this means to our country.”

No US president has ever been removed from office through impeachment. Three - Trump in 2019, Bill Clinton in 1998 and Andrew Johnson in 1868 - previously were impeached by the House but acquitted by the Senate.

Three - Trump in 2019, Bill Clinton in 1998 and Andrew Johnson in 1868 - previously were impeached by the House but acquitted by the Senate

Some Republicans argued the impeachment drive was a rush to judgment that bypassed the customary deliberative process such as hearings and called on Democrats to abandon the effort for the sake of national unity and healing.

“Impeaching the president in such a short time frame would be a mistake,” said Kevin McCarthy, the House’s top Republican. “That doesn’t mean the president is free from fault. The president bears responsibility for Wednesday’s attack on Congress by mob rioters.” 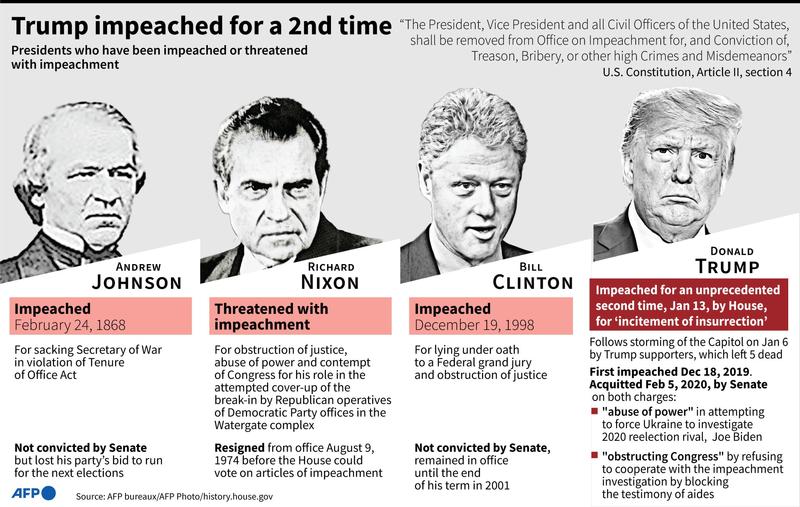 Ten Republicans voted to impeach, including Liz Cheney, the No. 3 House Republican.

“I am not choosing a side, I’m choosing truth,” Republican Jamie Herrera Beutler said in announcing her support for impeachment, drawing applause from Democrats. “It’s the only way to defeat fear.”

In a break from standard procedure, Republican House leaders refrained from urging their members to vote against impeachment, calling the vote a matter of individual conscience.

In a break from standard procedure, Republican House leaders refrained from urging their members to vote against impeachment, calling the vote a matter of individual conscience

Under the US Constitution, impeachment in the House triggers a trial in the Senate. A two-thirds majority would be needed to convict and remove Trump, meaning at least 17 Republicans in the 100-member chamber would have to join the Democrats.

McConnell has said no trial could begin until the Senate was scheduled to be back in regular session on Jan. 19, one day before Biden’s inauguration. The trial would proceed in the Senate even after Trump leaves office.

McConnell, who is reported to be furious with Trump, said in a memo to his fellow Republicans that he had not made a final decision on how he will vote on impeachment in the Senate.

Biden said work on the economy, getting the coronavirus vaccine program on track and confirming crucial Cabinet posts should not be delayed by the Senate trial.

“I hope that the Senate leadership will find a way to deal with their Constitutional responsibilities on impeachment while also working on the other urgent business of this nation,” he said in a statement.

The Capitol siege raised concerns about political violence in the United States once considered all but unthinkable. The FBI has warned of armed protests planned for Washington and all 50 US state capitals ahead of Biden’s inauguration.

I urge that there must be NO violence, NO lawbreaking and NO vandalism of any kind. That is not what I stand for, and it is not what America stands for

Trump on Wednesday urged his followers to remain peaceful, saying in a statement: “I urge that there must be NO violence, NO lawbreaking and NO vandalism of any kind. That is not what I stand for, and it is not what America stands for.”

Impeachment is a remedy devised by America’s 18th century founders to enable Congress to remove a president who has, according to the Constitution, committed “treason, bribery or other high crimes and misdemeanors.” If Trump is removed before Jan. 20, Vice President Mike Pence would become president and serve out his term.

The House impeached Trump after he ignored calls for his resignation and Pence rebuffed Democratic demands to invoke a constitutional provision to remove the president.

The House previously voted to impeach Trump in December 2019 on charges of abuse of power and obstruction of Congress stemming from his request that Ukraine investigate Biden and his son Hunter ahead of the election, as Democrats accused him of soliciting foreign interference to smear a domestic political rival. The Senate in February 2020 voted to keep Trump in office.

Wednesday’s article of impeachment accused Trump of “incitement of insurrection,” saying he provoked violence against the US government in his speech to supporters. The article also cited Trump’s Jan. 2 phone call asking a Georgia official to “find” votes to overturn Biden’s victory in the state.

During his Jan. 6 speech, Trump falsely claimed he had defeated Biden, repeated unfounded allegations of widespread fraud and irregularities in a “rigged” election, told his supporters to “stop the steal,” “show strength,” “fight much harder” and use “very different rules” and promised to go with them to the Capitol, although he did not.

“If you don’t fight like hell, you’re not going to have a country anymore,” Trump told his supporters.