By Leonardus Jegho in Jakarta 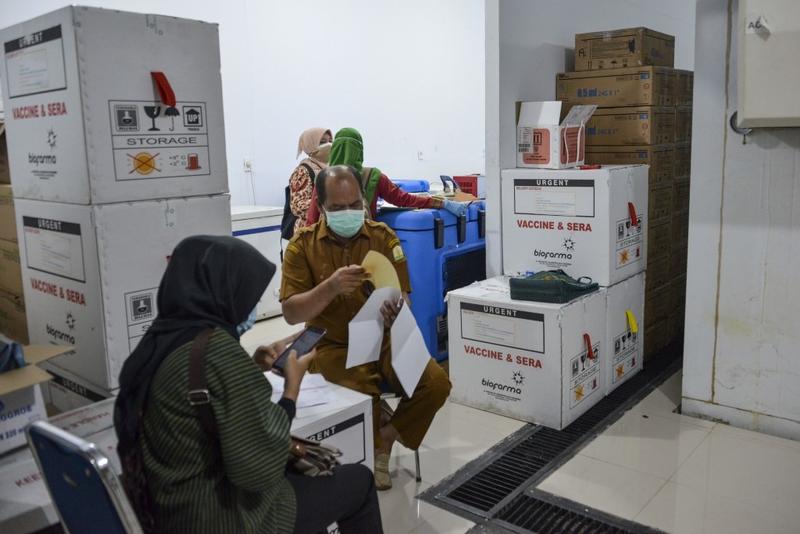 Indonesian health staff check Sinovac vaccines for the COVID-19 coronavirus at a storage facility before they are distributed to other provinces, in Banda Aceh on Jan 5, 2021. (CHAIDEER MAHYUDDIN / AFP)

Indonesia gets ready to launch its vaccination drive on Wednesday.

For one of the last official preparations to complete, the Food and Drug Monitoring Agency gave a “go ahead” for using the Sinovac vaccine, Penny Lukito from the agency told Monday afternoon’s online news conference from Bandung, West Java.

Indonesian President Joko Widodo and those Cabinet members aged from 18 to 59 years are to get the first shots in the expectation that people from other priority groups will follow suit. For now, only people in that age group are eligible for the vaccine.

The arrival of the Sinovac vaccine last month, with 1.2 million and 1.8 million doses in two shipments, has become a hot topic in Indonesia.

Many have expressed cautious optimism over the effectiveness of the vaccine and the nation’s COVID-19 immunization program.

Jakarta doctor Lie Hermanto is looking forward to getting a shot of a Chinese COVID-19 vaccine this week.

Hermanto has been registered to receive the vaccine ahead of the launch on Wednesday of Indonesia’s mass inoculation drive. He will get a dose of the vaccine, made by Chinese pharmaceutical firm Sinovac, requiring two doses.

The Chinese vaccine is welcome in Indonesia as countries compete to acquire COVID-19 vaccines, Hermanto said.

The immunization priority groups include medical doctors and other healthcare workers, COVID-19 case tracing workers, and members of the military and the police forces as well as religious leaders.

The Indonesian Food and Drug Monitoring Agency has declared that the Sinovac vaccine has no critical side effects. On Friday, the Indonesian Ulema Council issued its seal of approval, with the vaccine being free of any elements forbidden under Islam.

Despite the optimism surrounding the vaccination drive, some have expressed concerns over how distribution will be managed, in particular for getting the vaccine to remote villages.

But government officials said they did not envisage any serious problems. Vaccination for those in the priority groups is scheduled to last until next month.

On Thursday, an official at the Ministry of Health’s information center expressed optimism that the distribution to all the country’s 34 provinces would go smoothly.

She said that on the first day of distribution from the headquarters of state-owned pharmaceutical company PT Bio Farma in Bandung, West Java, 14 provinces were reached.

The plan is for all Indonesia’s provinces to receive supplies of the vaccine this week.

The country had around 820,000 confirmed cases with about 24,000 deaths by Monday, according to the World Health Organization.

Medical doctor A. Aurensia Waso, from East Nusa Tenggara Province, said on Saturday that many are keenly awaiting the shipments.

Hermanto, who has worked in the Ministry of Health and the Jakarta office of the World Health Organization on vaccine analysis projects, said he feels sure that distribution will go smoothly.

“Especially for vaccines, the government has long experience in distribution,” Hermanto said.

He said that while he did not know the efficacy rating of coronavirus vaccines, it is important to get the vaccine to people now.

“I am especially concerned with medium and small-scale businesses which require their workers to carry out face-to-face tasks,” said Rochimat, who is chairman of Jakarta-based PT Vivere Grup Tbk.

Indonesia is also seeking to buy other vaccines in addition to Sinovac’s. The country needs at least 426 million doses of vaccines to immunize 180 million of its 270 million people in order to achieve herd immunity.

Still, some analysts fear that vaccinations might lead people into complacency and result in their neglecting safeguards such as face masks.

President Widodo has repeatedly reminded the nation that vaccinations will only succeed if people maintain social distancing.