Pepe redeems himself as Arsenal ease to win at Molde 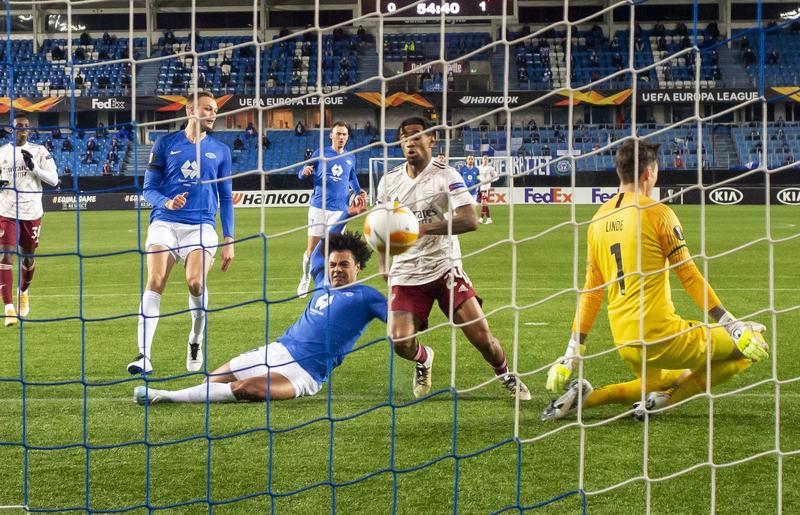 Arsenal's Reiss Nelson scores to take the score to 0-2 against Molde, during the Europa League Group stage Group B, soccer match between Molde and Arsenal at Aker Stadium in Molde, Norway, Nov 26, 2020. (SVEIN OVE EKORNESVAG / NTB VIA AP)

Arsenal forward Nicolas Pepe put himself back in manager Mikel Arteta’s good books with the opening goal in a 3-0 win at Molde on Thursday that sealed his side’s place in the Europa League knockout stages with two games to spare.

Arsenal’s win left them top of Group B with a maximum 12 points from four games, six clear of second-placed Molde

The Ivory Coast international, sent off for a head-butt on Leeds United’s Ezgjan Alioski that Arteta called unacceptable last weekend, produced a fine finish in the 50th minute, shortly after striking the crossbar with a superb curling effort.

Arsenal, disappointing in a drab first half against the Norwegian side they beat 4-1 at home, doubled their lead five minutes later when Reiss Nelson converted a precise low cross.

Substitute Folarin Balogun, 19, made it 3-0 to the visitors with his first goal for the club, moments after coming on, silencing the smattering of home fans allowed inside the stadium.

Arsenal’s win left them top of Group B with a maximum 12 points from four games, six clear of second-placed Molde. Rapid Vienna, who have three points, face Dundalk later.

The visitors were extremely fortunate not to fall behind early on when Sheriff Sinyan met a low cross a metre from an open goal but somehow steered the ball back to Arsenal keeper Runar Runarsson.

There was little goalmouth incident in the first half but Arsenal, inspired by 72 million pound record signing Pepe, changed gear after the break.

After rattling the crossbar, Pepe deftly controlled Joe Willock’s cross, then cut inside and fired an unstoppable shot past the dive of Andreas Linde.

Eddie Nketiah had a goal ruled out but Willock slid a ball across the goal for Nelson to convert.

The double blow knocked the stuffing out of Molde and Alexander Lacazette was denied by Linde before Balogun provided the icing on the cake as he turned sharply to convert fellow substitute Emile Smith Rowe’s cross.