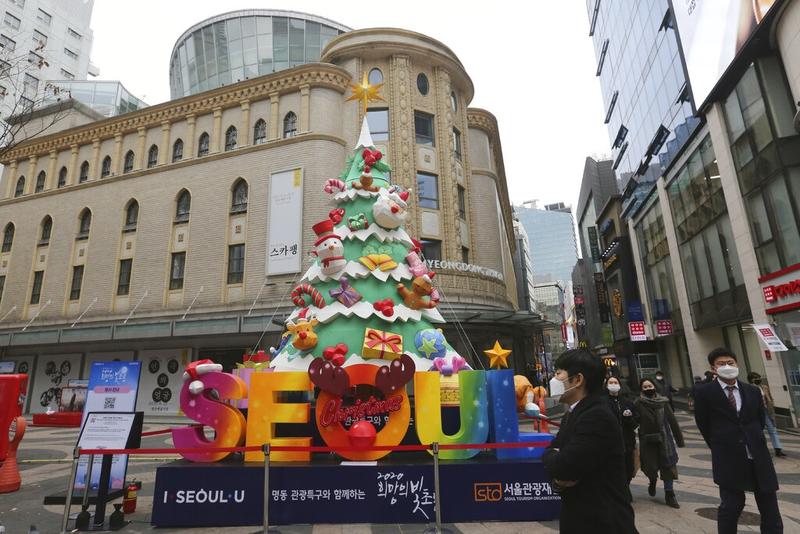 The Korea Disease Control and Prevention Agency (KDCA) reported 330 new daily coronavirus cases as of midnight on Saturday, a drop from 386 reported the day before, but the fifth straight day of more than 300 new cases.

The third wave of COVID-19 outbreaks is increasingly in full swing. The situation is extremely serious and grave.

"The third wave of COVID-19 outbreaks is increasingly in full swing," Health Minister Park Neung-hoo said at a briefing. "The situation is extremely serious and grave."

A nationwide outbreak was being driven by clusters of infections in the densely-populated Seoul metropolitan area, he said, home to around half of the country's 52 million residents.

From Tuesday, major coffee shops in the Seoul area will be required to only offer takeaway and delivery service, while restaurants must close to in-person dining after 9 pm. Other restrictions will be placed on facilities like gyms, with attendance caps on religious gatherings and sporting events.

Earlier in the day, Prime Minister Chung Sye-kyun said at a government meeting that preemptive distancing regulations might be needed to head off a wider outbreak, Yonhap news agency reported.

A KDCA official said Saturday that the country could be facing an outbreak that surpasses two earlier waves of infections, if it fails to block the current spread.

The tightened prevention guidelines are aimed partly at allowing students to go ahead with highly competitive annual college entrance exams scheduled for Dec 3.

In total, the country has reported 30,733 confirmed cases with 505 deaths.

Australia moved a step closer to normal life on Sunday, opening some internal borders and easing restrictions in regions affected by COVID-19, as the vast majority of the country has seen no newly reported community infections or deaths for weeks.

South Australia, which last week became the epicenter of the country's infections, reported no new community cases and lifted a drastic lockdown earlier than planned, with the state premier saying swift action had avoided disaster.

The number of active cases in the state stood at 37 after an outbreak linked to a returned traveler from Britain forced 4,500 people to quarantine.

Neighboring Victoria, where 90 percent of Australia's 907 COVID-19-related deaths have been recorded, relaxed its mask rules on Sunday, saying they are not required outside, and allowed larger public gatherings. The state has had no new infections for 23 days.

New South Wales, the most populous state, reported no new community cases on Sunday for a 15th straight day. The state will open its border with Victoria on Monday.

There were 12 new cases reported across Australia among travellers in hotel quarantine. There were an estimated 88 cases active throughout the country on Sunday. 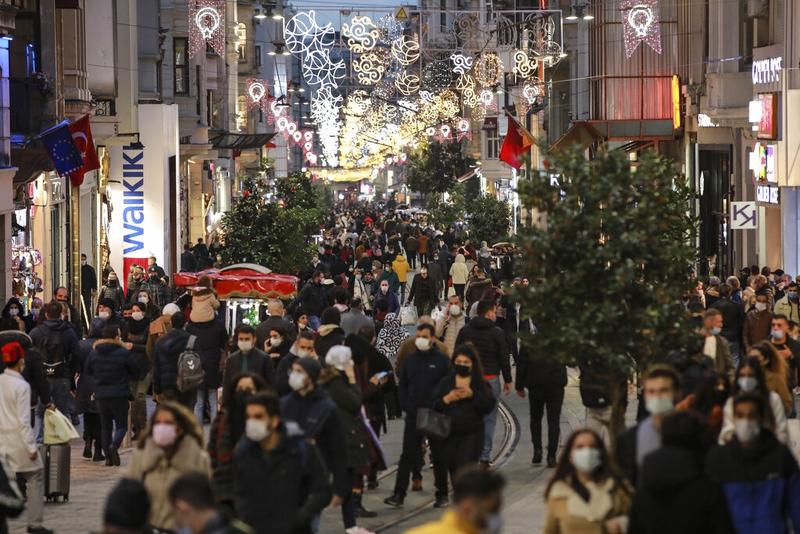 People walk along the main shopping street in Istanbul, Turkey, a few hours before a lockdown. On Nov 21, 2020. (EMRAH GUREL / AP)

Turkey on Saturday reported its highest daily number of new coronavirus patients since the outbreak started.

Data from the Health Ministry showed that 5,532 people had been diagnosed with COVID-19 symptoms in the previous 24 hours.

Since July, Ankara has only reported symptomatic cases of coronavirus, a move that critics say hides the true scale of the outbreak.

The daily death toll was 135, bringing the cumulative number of fatalities to 12,219.

Afghanistan on Saturday recorded 140 new COVID-19 cases in the past 24 hours, bringing the country's tally to 44,503, the Ministry of Public Health said.

Bangladesh reported 1,847 new COVID-19 cases and 28 additional deaths on Saturday, taking the tally to 445,281 and death toll to 6,350, the Directorate General of Health Services (DGHS) said.

A Cambodian man has tested positive for COVID-19 after having been in a quarantine center for nearly four weeks since he returned from Japan, a spokeswoman for the Ministry of Health (MoH), Or Vandine, said in a statement Sunday.

The 27-year-old man arrived in the capital Phnom Penh on Oct 26 from Japan via a connecting flight in South Korea, she said, adding that the man had been placed in a quarantine center in the capital since then, after four passengers on the same flight tested positive on Oct 27 and Nov 8.

"On the 13th day of quarantine, the man's samples were taken for the fourth test and the result showed (on Saturday) that he turned out to be positive for COVID-19," she said.

Cambodia has so far recorded a total of 306 confirmed cases, Vandine said, adding that none have died and 295 have recovered. 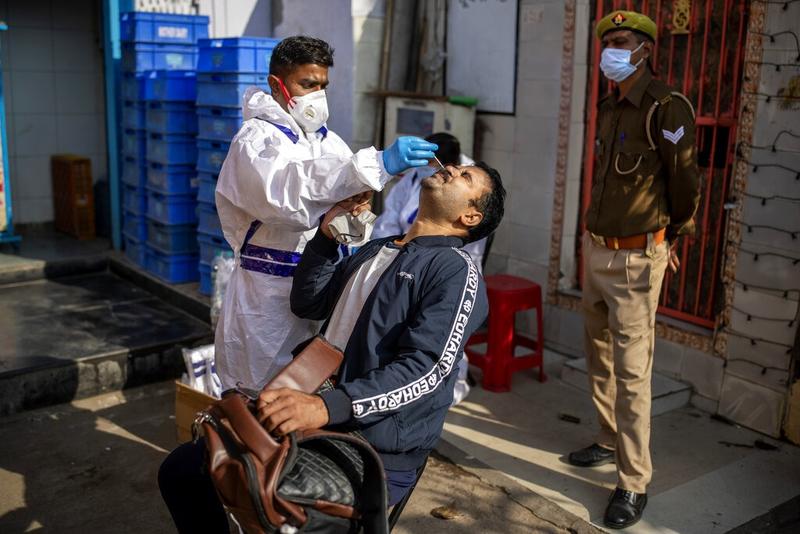 A man reacts as a health worker takes a  nasal swab sample to test for COVID-19, in front of a shop at the Delhi-Noida border on the outskirts of New Delhi, India, Nov 21, 2020. (ALTAF QADRI / AP)

India has conducted more than 130 million tests so far, the ministry said.

The country has reported 9,095,806 confirmed cases and 133,227 deaths. On Sunday, 45,209 new cases and another 501 deaths were reported, according to the latest data released by the federal health ministry.

There were 440,962 active cases in the country, while 8,521,617 people had been discharged from hospitals after recovery.

Iran introduced tougher restrictions on Saturday to stem a third wave of coronavirus infections, including closing non-essential businesses and travel curbs, but state media reported widespread flouting of the rules.

Deputy Health Minister Alireza Raisi said the 10 percent of people who ignored the health regulations could spread the virus to 80 percent of the population, adding that family gatherings were the main cause of infections.

To encourage people to stay at home, the government has ordered the closure of non-essential businesses and services in 160 high risk “red” towns and cities, where more than 53 million people live, as well as a ban on cars leaving or entering these locations. A 9-pm to 4-am ban on all driving is also in force in these areas. Rule breakers will be fined 10 million rials, or about US$37. 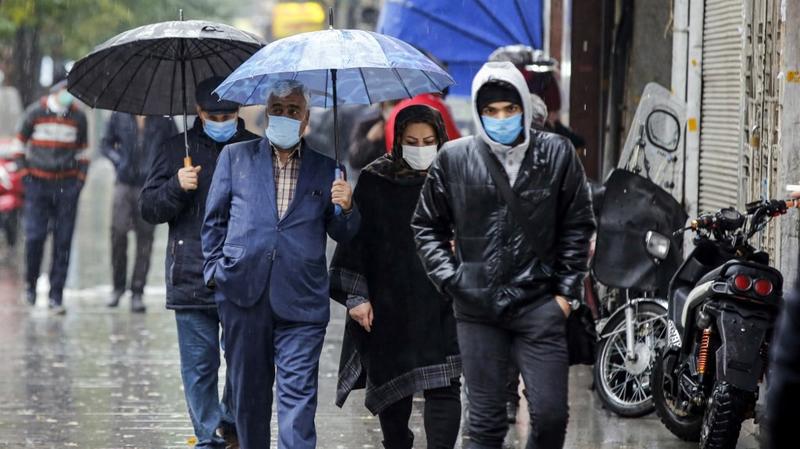 Pedestrians wearing face masks walk in the rain past closed shops along a street in Iran's capital Tehran on Nov 21, 2020. (PHOTO / AFP)

President Hassan Rouhani said in televised remarks on Saturday the two-week restrictions could be extended if the desired results were not achieved.

According to the statement, Saturday's daily tally was the lowest since July. The ministry has recorded between 2,000 and 5,000 daily COVID-19 cases since July.

Japan may reimpose attendance limits for sports and other large events to curb a spike in COVID-19 infections, Economy Minister Yasutoshi Nishimura said on Sunday.

The limits would be applied in areas of the country seeing a sharp increase in cases, Nishimura said on a talk show on public broadcaster NHK. The government imposed attendance limits earlier in the year but relaxed them in recent months.

Japan reported 2,560 new COVID-19 cases on Saturday, hitting a new record for the fourth consecutive day, according to the latest figures released by the health ministry and local authorities

The government was also considering how to refund cancellation fees for customers who booked trips via a domestic tourism campaign that was partially suspended on Saturday, Nishimura said.

Japan reported 2,560 new COVID-19 cases on Saturday, hitting a new record for the fourth consecutive day, according to the latest figures released by the health ministry and local authorities.

The new infections took the nation's tally to 130,915, not including those recorded on the Diamond Princess cruise ship that was quarantined near Tokyo earlier in the year.

The death toll rose by five to 1,987, including 13 from the Diamond Princess.

Malaysia has registered 1,041 new COVID-19 cases, the Health Ministry said on Saturday, bringing the tally to 53,679.

Of the new cases, two were imported, the ministry's Director-General Noor Hisham Abdullah said in a press statement.

Mongolia recorded 26 more COVID-19 cases on Sunday, all locally transmitted, bringing the number of infections in the country to 608, according to the National Center for Communicable Diseases (NCCD).

So far, the country has reported 182 local cases, Amarjargal Ambaselmaa, head of the NCCD's Surveillance Department, said at a press conference.

More than half of the confirmed cases in the country were asymptomatic, the official added.

Domestically transmitted cases have been reported in the capital city of Ulan Bator, as well as the provinces of Selenge, Darkhan-Uul, Govisumber, Orkhon and Dornogovi.

Myanmar recorded 1,434 newly confirmed COVID-19 cases and 27 more deaths, according to a press release issued by the health ministry on Saturday.

Nepal's Minister of Health and Population Bhanu Bhakta Dhakal said on Saturday that the Himalayan country aims to limit the COVID-19 cases below 600,000, until vaccines are available.

Addressing an event titled "Role of Lawmakers for an effective communication of COVID-19 pandemic and its risks," Dhakal said that the Nepali government wanted to see less than two percent of the population infected until there were vaccines.

Nepal's estimated population currently stands around 30 million, according to the Central Bureau of Statistics.

As of Saturday, Nepal has reported a total of 218,639 COVID-19 cases, according to the health ministry.

New Zealand reported nine new cases of COVID-19 on Sunday, the Ministry of Health said in a statement.

All the new cases involved recent returnees who tested positive for COVID-19 while in managed isolation, the ministry said.

The country has reported 1,672 confirmed cases in total. There were 50 active cases in New Zealand, the ministry said.

The Department of Health (DOH) of the Philippines reported 1,968 newly confirmed cases of COVID-19 on Sunday, bringing the country's infection tally to 418,818.

The DOH said 10,957 more patients have recovered, raising the total number of recoveries to 386,486.

The Philippines has reported less than 2,000 new cases for 13 consecutive days. The DOH, however, said there were still areas that were seeing a rise in cases.

"We are at moderate risk already," Health Undersecretary Maria Rosario Vergeire said during an online briefing over the weekend, adding that the DOH is closely watching those areas with virus clusters.

Tens of thousands of mourners attended the funeral of a hardline Pakistani cleric in the eastern city of Lahore on Saturday, defying a government ban on large public gatherings in the wake of rising COVID-19 cases in the country.

Khadim Hussain Rizvi, 54, died of cardiac arrest on Thursday, just days after leading a violent protest march to the capital, Islamabad, against the publication in France of cartoons depicting the Prophet Muhammad.

Daily coronavirus infections have risen in Pakistan this month, and the government banned big events and meetings as it declared the country was witnessing a "second wave" after a three-month lull in cases.

Official data released on Saturday showed 2,843 people had tested positive for the virus and 42 had died during the last 24 hours - both figures the highest for a day since July.

All of the new cases were imported.

Six more patients were discharged from hospitals and community isolation facilities, taking the number of recoveries to 58,064, the ministry said.

There were 22 active cases being treated in hospitals, of whom one was in intensive care.

Vietnam recorded one newly confirmed case of COVID-19 on Saturday, bringing its tally to 1,306 with 35 deaths, according to the Ministry of Health.

The new case involved a 38-year-old Vietnamese man who recently returned from abroad and was quarantined upon arrival, said the ministry.