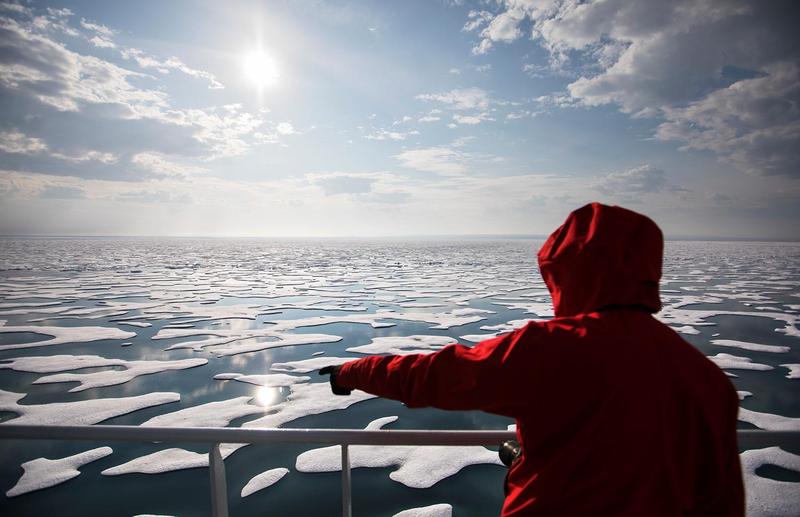 Researcher Tiina Jaaskelainen points out a possible sighting of wildlife aboard the Finnish icebreaker MSV Nordica as it traverses the Northwest Passage through the Canadian Arctic Archipelago, July 22, 2017. (DAVID GOLDMAN / AP)

LONDON - The United Nations shipping agency on Friday approved a ban on the use of heavy fuel oil in the Arctic region in a move criticized by green groups which said loopholes will allow many vessels to keep sailing without enough regulatory control.

Antarctic waters are protected by stringent regulations, including a ban on heavy oil fuel (HFO) adopted in 2011, even though no cargo moves through the turbulent southern waters. For the Arctic, the rules have been looser.

In a virtual session of its Marine Environment Protection Committee the UN’s International Maritime Organization approved a ban on the use of HFO and its carriage for use by ships in Arctic waters after July 1, 2024

In a virtual session of its Marine Environment Protection Committee (MEPC) the UN’s International Maritime Organization (IMO) approved a ban on the use of HFO and its carriage for use by ships in Arctic waters after July 1, 2024.

The Clean Arctic Alliance coalition described the regulations as “outrageous” as it included exemptions and waivers, which would mean a complete HFO ban would only come into effect in mid-2029.

“In its current form, the ban will achieve only a minimal reduction in HFO use and carriage by ships in the Arctic in mid-2024,” said Sian Prior, lead advisor to the Clean Arctic Alliance.

“The ban ... will mean that a full three-quarters of the ships using HFO today will be eligible for an exemption.”

An IMO spokeswoman said there would be an exemption for ships with oil fuel tanks located inside their double hull. There would also be a provision allowing countries with coastlines bordering Arctic waters to issue waivers to ships flying their flag while they operate there until July 1, 2029.

The Arctic has warmed at least twice as quickly as the rest of the world over the last three decades and shipping traffic has expanded.

ALSO READ: China to contribute to sustainable development of Arctic

Environmentalists say HFO produces higher emissions of harmful pollutants, including sulphur oxide, nitrogen oxides, and black carbon. In addition, a possible oil spill involving HFO from a ship could have a devastating impact on the Arctic’s ecosystem.

The next MEPC session, scheduled for June 2021, is expected to formally adopt the measures.