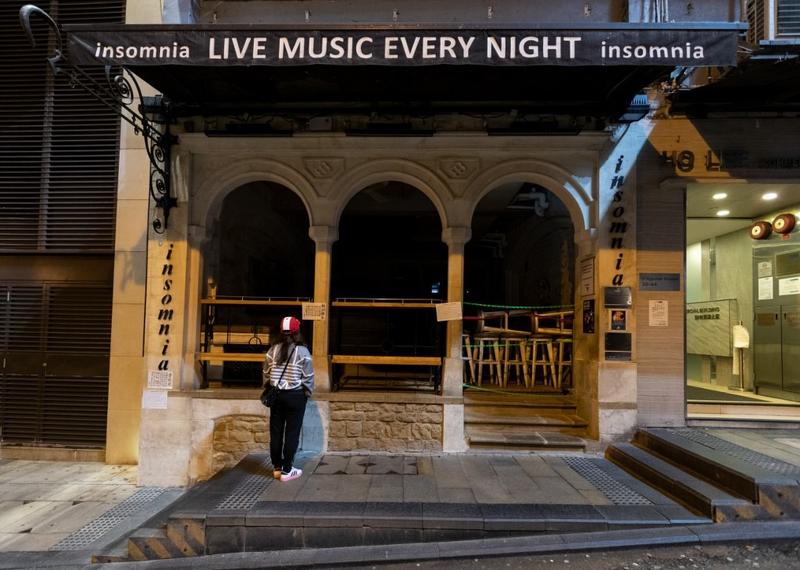 A woman looks at a placard displayed at the entrance of a closed live bar in the entertainment district of Lan Kwai Fong in Hong Kong early on April 5, 2020. (MAY JAMES / AFP)

HONG KONG – Hong Kong has moved to strengthen social distancing measures as the financial hub reported 43 new coronavirus cases on Saturday — the most in three months — with the city's chief executive describing the situation as "fairly severe."

The Hong Kong SAR government said in a statement Saturday morning that live performance and dancing will be suspended in catering premises, including bars and nightclubs, and party rooms for holding social gatherings will be closed.

The new measures will be effective for five days starting Sunday.

The top priority is to cut the transmission chains through virus testing, Lam said, adding that she had asked related authorities to conduct compulsory testing for high-risk people.

"The government is resolved to curb the epidemic," Lam added in her post.

People running catering businesses face a fine of up to HK$50,000 and six months’ jail for breaching the new rules.

Among the 43 new cases reported on Saturday, 36 were locally transmitted and the source of origin of 13 of them remained unknown, said Chuang Shuk-kwan, head of the communicable disease branch of the Centre for Health Protection, at a news briefing in the afternoon.

The government requested people who had recently visited any of 14 dancing venues linked to an infection cluster to take a mandatory COVID-19 test by Tuesday.

The seven imported cases were from the Philippines, Indonesia, the United Kingdom, the United States and Sweden, she added.

She added the new cases have been climbing rapidly in recent days and warned of the fourth wave of the epidemic outbreak.

In light of the latest situation, the bilateral air travel bubble between Hong Kong and Singapore, due to launch on Sunday, will be postponed for two weeks, Hong Kong officials said on Saturday.

Meanwhile, a spokesman for the Food and Health Bureau said the recent spike in cases indicated the existence of silent transmission chains in the community.

"We urge the public to stay at home as much as possible, go out less often unless necessary, and avoid dining out and unnecessary social activities," the spokesman said in a statement on Saturday.

The spokesman added anti-epidemic measures, including public gatherings of no more than four people and mask-wearing at public venues as announced on Nov 14, are still in effect until Nov 26.

The government will review and adjust the various measures in place from time to time with a view of the latest epidemic situation, the spokesman added.