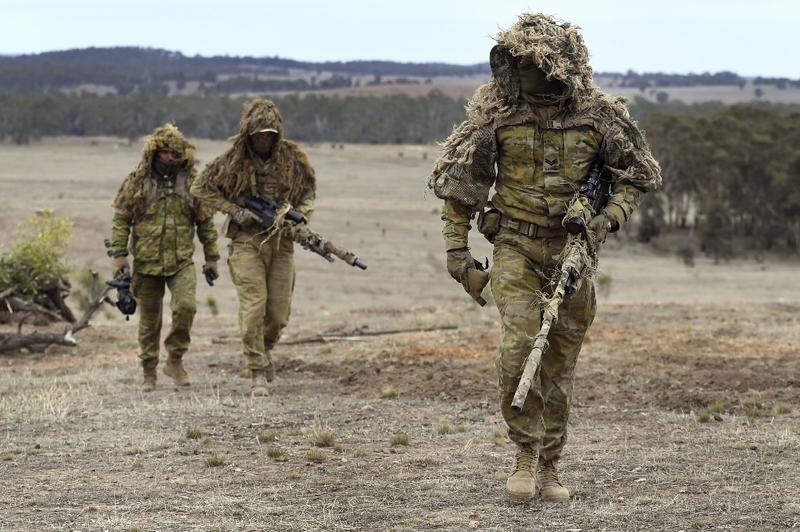 In this May 9, 2019 photo, Australian Army snipers walk from their position during Excercise Chong Ju, a live fire demonstration showcasing the army's joint combined arms capabilities at the Puckapunyal Military Base some 100 kilometers north of Melbourne. (WILLIAM WEST / AFP)

SYDNEY - Australian military personnel who spoke out against alleged war crimes in Afghanistan said on Friday they felt vindicated by an inquiry which called for possible prosecution of troops, as the country reacted with shame and anger at the findings’ severity.

The report has been described by Australian leaders as one of the darkest military chapters for Australia, just nine days after the country’s Remembrance Day for fallen soldiers

The report recommended referring 19 current and former soldiers for potential prosecution, in a development that prompted anguish in Australia which usually honours its military history with fervour.

David McBride, a former military lawyer facing charges of leaking information about special forces actions in Afghanistan, felt “buoyed” by the report after years of being treated like a “traitor to the diggers”, his lawyer Mark Davis told Reuters, using the Australian slang for soldiers.

“If the accusations that he’s previously made are proven right, he will feel vindicated whatever the penalty,” Davis said by telephone. “His reputation will be intact and his sense of honour will be intact.”

McBride has confirmed giving classified documents to the Australian Broadcasting Corp, triggering charges against him and an investigation into the public broadcaster which sensationally led to a raid on its Sydney headquarters last year.

Police dropped the ABC investigation last month, citing lack of public interest in proceeding, but McBride still faces a lengthy prison sentence if found guilty after a trial starting next year. His charges must now also be dropped, said his lawyer Davis.

Dusty Miller, a special forces medic who testified at the inquiry, told the Australian Broadcasting Corp that hearing the country’s defence chief publicly confirm his claims was “complete vindication”.

The report has been described by Australian leaders as one of the darkest military chapters for Australia, just nine days after the country’s Remembrance Day for fallen soldiers when it is customary to wear a red poppy to show respect.

Top lawmakers walked a delicate line of condemning the allegations of the report and supporting the possibility of prosecutions, while expressing solidarity with the country’s armed forces.

“It made me physically ill, and it was a very distressing read,” said Defence Minister Linda Reynolds, a former army officer.

Treasurer Josh Frydenberg said the allegations were “very serious but they should not overshadow the immense good work that is being done the defence forces in our name”.

Prime Minister Scott Morrison warned earlier that the report would be troubling for Australia and its military but has not commented since its publication. Overnight, the office of Afghan President Ashraf Ghani said on Twitter that Morrison had “expressed his deepest sorrow” over the allegations.

Reynolds said last week that Canberra had been advised that local prosecution would negate charges at the International Criminal Court at The Hague.

People in Kabul, the Afghan capital, welcomed the prospect of bringing perpetrators to justice, but were divided on the question of where.

“They who have committed such a big crime must be handed to face the law of Afghanistan and should be punished accordingly,” said Abdul Mutahal, a resident of Kabul.

Mohammad Isaaq Faiaz, a shi’ite imam, said the alleged perperators “should be brought to justice in Australia, and the affected families of those martyred must be paid with the ransom”.