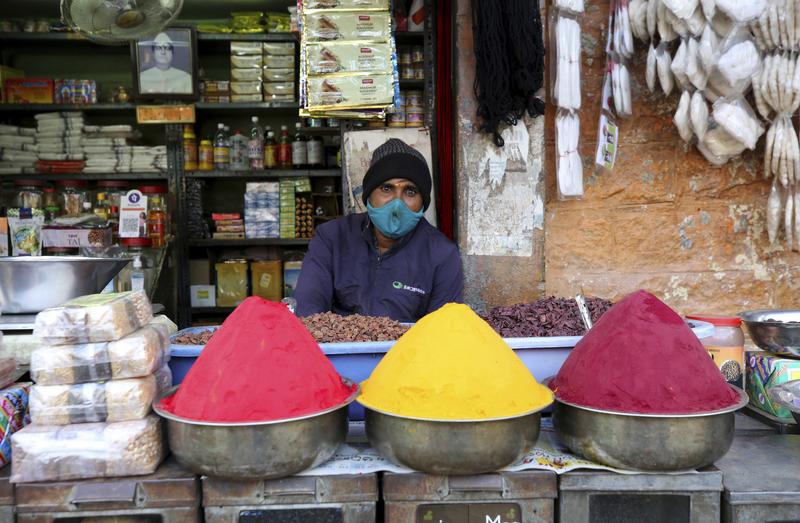 A shopkeeper wears a face mask as a precaution against the coronavirus waits for customers at a market in Bengaluru, India, Nov 20, 2020. (PHOTO / AFP)

India is only the second country to cross 9 million coronavirus infections, after the United States, but cases have slowed down in the country after hitting a peak in September.

Government officials and experts have warned that the country could still see a spike after the festival of Diwali was celebrated this month. 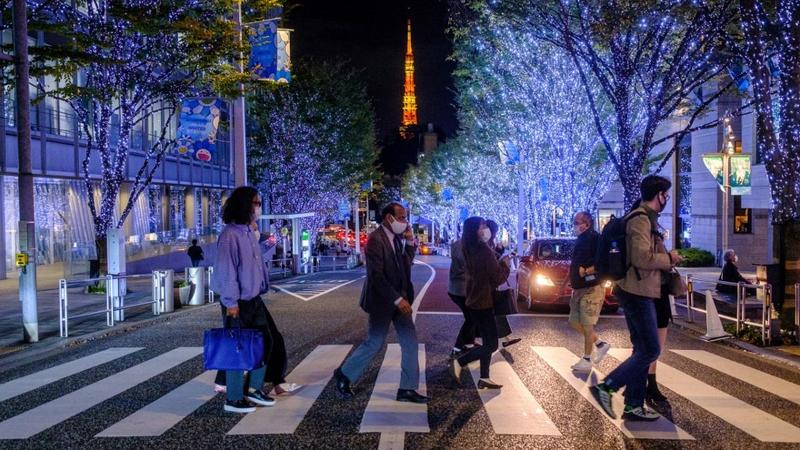 People cross a road with illuminated trees as Tokyo Tower looms in the distance in the Roppongi district of Tokyo on Nov 19, 2020. (PHOTO / AFP)

According to the latest figures from the health ministry and local authorities, Japan's total tally rose to 128,344, not including those connected to the Diamond Princess cruise ship that was quarantined near Tokyo earlier in the year.

In the capital of Tokyo, the epicenter of the country's outbreak, 522 new COVID-19 cases were reported on Friday, exceeding the 500-mark for a second consecutive day, bringing its cumulative total to 36,778, the highest among the country's 47 prefectures.

The Tokyo metropolitan government on Thursday raised its virus alert by one notch to the highest level, meaning "infections are spreading." 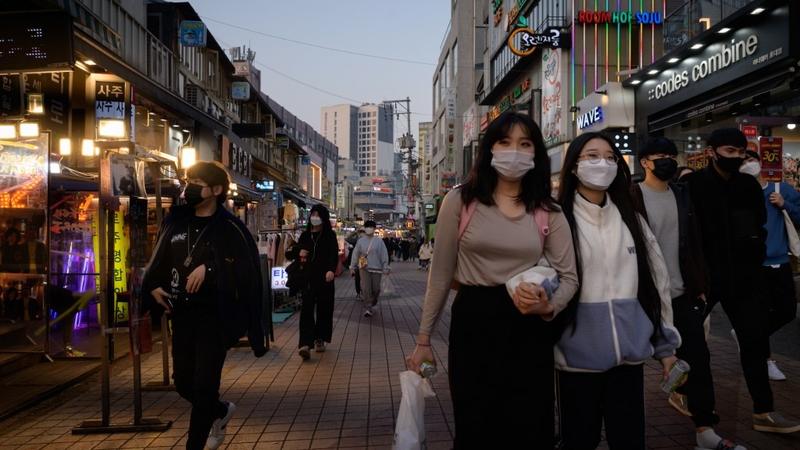 Pedestrians wearing face masks make their way along a street in Seoul on Nov 16, 2020. (PHOTO / AFP)

South Korean Prime Minister Chung Sye-kyun urged citizens to stay home and cancel gatherings, as the country’s confirmed cases exceeded 300 for a third day. The government will minimize face-to-face meetings from next week, he said in a nationwide address.

The government urges companies to implement a work-from-home scheme and will push forward the annual state college entrance exam as scheduled in December. South Korea is currently working on securing vaccines, he said.

South Korea earlier reported 363 new coronavirus cases in 24 hours, according to data from the Korea Disease Control and Prevention Agency.

South Australia will lift its lockdown early and immediately allow outdoor exercise, amid early signs its cluster of COVID-19 infections is being contained.

The original six-day lockdown that began Thursday will end at midnight Saturday, Premier Steven Marshall told reporters. The ban on exercise and even dog-walking had made the state’s measures among the strictest in the world.

The death toll of COVID-19 in Afghanistan has increased to 1,663 after 13 patients lost their lives within the past 24 hours, the country's Ministry of Public Health reported on Friday.

The ministry also confirmed 186 new cases during the period, bringing the number of infected people across the country to 44,363 including 7,316 active cases, the ministry said in a statement.

Iran's daily COVID-19 infections have crossed the 10,000-mark for the 11th day in a row as it reported 13,223 cases on Thursday. Meanwhile, Egypt registered 329 new coronavirus infections on Wednesday, the highest daily spike since July.

The tally of COVID-19 cases in Iran, the worst-hit country in the Middle East, surged to 815,117, said Sima Sadat Lari, spokeswoman for the Iranian Ministry of Health and Medical Education.

The ministry reported in a statement 39 new deaths and 2,314 more recovered cases in the country, raising the death toll from the infectious virus to 11,834 and the total recoveries to 457,490.

A total of 3,202,083 tests have been carried out across the country since the outbreak of the disease in February, with 19,264 done during the day, according to the statement.

Turkey reported 4,542 new COVID-19 patients on Thursday, raising the total number in the country to 430,170, the Turkish Health Ministry announced.

Singapore will tighten border measures for travelers who have been to Malaysia or Japan amid a resurgence of coronavirus cases in those countries.

All of the new cases are imported cases.

The ministry also confirmed 39 new deaths and 2,314 more recovered cases, raising the death toll from the infectious virus to 11,834 and the total recoveries to 457,490.

The death toll in Israel rose by three to 2,742, while the number of patients in serious condition increased from 309 to 315, out of 541 patients currently hospitalized.

Earlier on Thursday, Israel's Corona Cabinet approved the reopening of zoos across the country, as  part of its plan to ease the ongoing nationwide lockdown.

Kuwait reported 485 new COVID-19 cases and two more deaths, raising the tally of infections to 138,822 and the death toll to 859 in the country.

The Kuwaiti Health Ministry also announced the recovery of 587 more patients, taking the total recoveries in the country to 130,426.

In Oman, the health ministry announced 231 new COVID-19 infections, raising the total number of confirmed cases in the Sultanate to 121,360.

Of these recent returnees, one person arrived from Romania (via Qatar and Brisbane) on Nov. 3. The person is already in an Auckland quarantine facility as a contact of three previously confirmed cases, and returned a positive result to routine day 12 testing, according to the Ministry of Health.

The new cases were discovered out of 3,373 COVID-19 medical tests that were conducted in the country during the last 24 hours, the Republican Headquarters for Combating COVID-19 said.

The total number of recovered patients in the country stood at 59,789 including 427 new recoveries over the past day.

A total of 3,137 patients are being treated in hospitals, 126 of them in intensive care, while 3,826 patients are receiving treatment at home.

Meanwhile, six more deaths were registered in 24 hours, taking the count to 1,223.

The Department of Health (DOH) of the Philippines on Friday reported 1,639 new confirmed cases of COVID-19, bringing the total tally to 415,067.

The DOH said that 305 more patients recovered, raising the total number of recoveries to 375,237. The death toll rose to 8,025 after 27 more patients died from the coronavirus epidemic.

Presidential spokesperson Harry Roque said the government is pleased with the results of the Social Weather Stations (SWS) survey conducted from Sept. 17-20, which showed 66 percent of the country's adult population are willing to get the COVID-19 vaccine.

Health Ministry Director-General Noor Hisham Abdullah said in a press statement that five of the new cases are imported and with 953 being local transmissions.

The pandemic has so far claimed 43,896 lives in Iran, up by 479 in the past 24 hours, said Sima Sadat Lari, spokeswoman for the Iranian Ministry of Health and Medical Education during her daily briefing.

Vietnam reported a new case of COVID-19 infection on Friday, bringing its total confirmed cases to 1,305 with 35 deaths from the disease so far, according to its Ministry of Health.

The new case is a Vietnamese man who recently entered the country from abroad and was quarantined upon arrival, said the ministry.

The latest confirmed cases were reported in Selenge province in northern Mongolia, Amarjargal Ambaselmaa, head of the Surveillance Department of the NCCD, said at a press conference.

The number of confirmed COVID-19 cases in the country reached 557, including 130 locally transmitted cases as of Friday evening.