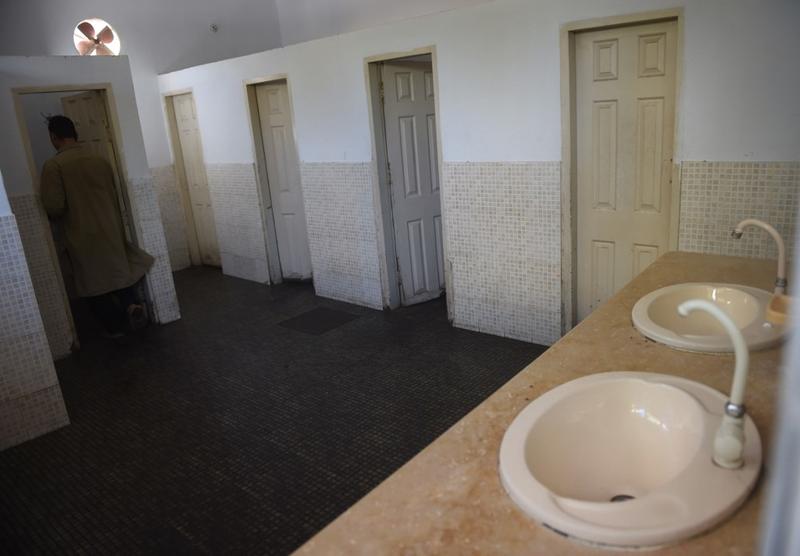 KARACHI - As Pakistan struggles with equal access to sanitation, a new project aims to make the city of Karachi cleaner, healthier and more inclusive by building the country’s first privately managed public toilets out of old shipping containers.

According to the international charity WaterAid, about 40 percent of Pakistan’s population of roughly 208 million lacks decent toilets

“Women, disabled citizens and transgender people are our special focus,” said Salman Sufi, head of the Salman Sufi Foundation (SSF), the social welfare group behind the Saaf Bath project in the capital of Sindh province, in south Pakistan.

The first toilet was set up in September near a bus station in the bustling Lea Market. Each block is divided into two sections - one for men, one for women - with sit-down toilets, wash basins, soap, toilet paper and electric hand dryers.

According to the international charity WaterAid, about 40 percent of Pakistan’s population of roughly 208 million lacks decent toilets.

Along with accessibility, another sanitation problem the Saaf Bath project hopes to tackle is the common practice of defecating in the open. WaterAid notes that more than 11 percent of Pakistanis go to the toilet in the street.

Health experts link open defecation to public health issues, such as diarrhoea, as it increases the spread of parasites due to water contamination.

Costing 2 million Pakistani rupees (US$12,700) each to build, the toilet blocks are well-lit and ventilated with exhaust fans, and have ramps for wheelchair access and baby-changing stations, noted Shahzeb Naeem, director of operations at SSF.

Mohammad Hanif, who works in a cargo office in Lea Market, said the area desperately needed somewhere clean for people to relieve themselves.

“I had little choice but to use the stinky and perpetually wet public toilet a little further away from here,” he said. “This one is like using a five-star facility.”

A previous effort launched about two decades ago, when the Citizens-Police Liaison Committee (CPLC), an independent group originally formed to tackle crime in the city, decided to build 1,000 public toilets, explained Shaukat Suleman, deputy chief at the CPLC.

Now, a tight government budget means the committee has managed to build 35 toilets for a city of more than 14 million people, Suleman noted.

Only 23 of those toilets are still working, he added, and all suffer from a variety of electricity, water and sewage problems.

Raakhi Matan, a housemaid in Karachi, said she and her three children refuse to use the old public toilets.

“If we are out in the park, and they feel the need to go, they insist we return home,” she said, adding that women, in particular, need “a private place in a public space” as they cannot just “squat anywhere like men do”.

Following the installation of the toilets in Lea Market and Jheel Park - which were donated by consumer goods group Reckitt Benckiser - as well as one in Lahore, the SSF plans to build 50 toilets around Karachi by next year, said Naeem, the director of operations.

Irshad Sodhar, deputy commissioner of the city’s southern district, has welcomed the initiative.

RAED MORE: Do we need to disinfect toilet to prevent coronavirus?

“All that the SSF needed was space and help identifying the areas where the facilities were most needed,” he said.

Still, it may take more than shiny new toilets to curb the habit of open defecation. On any given day in Lea Market, men can be seen defecating near the garbage dump right next to the recently installed SSF toilet.

“It is difficult to change this behaviour,” Sodhar said.