Return of the Concubine 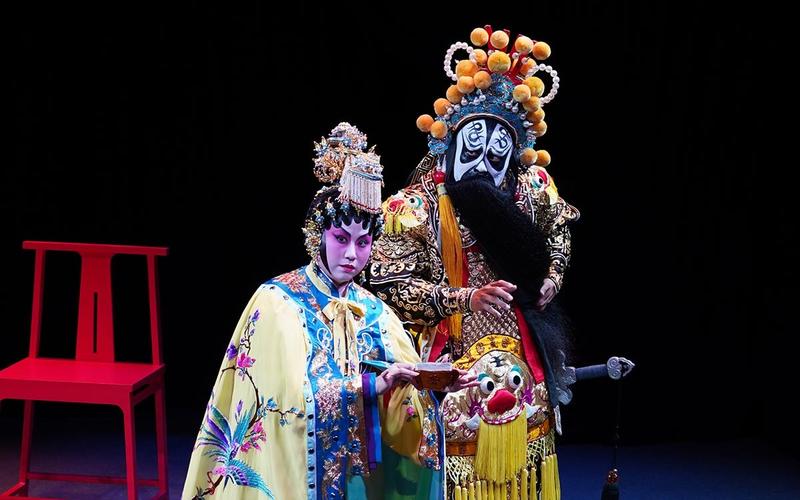 Cantonese opera is too often associated with elderly women audiences, nostalgic for the bygone era of temporary bamboo theaters and mass entertainment. Farewell My Concubine, part of the Experimental Chinese Opera Festival at Xiqu Centre, chips away at that perception with a slick show that blends traditions with contemporary production techniques. The result is a spectacle that feels familiar and looks glamorous, reaching a new generation eager to experience Hong Kong’s only UNESCO Intangible Heritage-inscribed art form.

Staged in one of Xiqu Centre’s studios with a capacity of less than 100 seats in early November, the setting is intimate and fitting for the tragedy of Chu warlord Xiang Yu. In the final days of his bitter third century BC war against Han Dynasty emperor Liu Bang, defeat was imminent at the Battle of Gaixia. Stealing a few tender moments with his beloved consort Yuji, he urges her to flee for her life. She refuses to leave his side and, steadfast until the end, commits suicide by his sword. Devastated, Xiang wanders along the Wu River banks where he sees her ghost and succumbs to a similar fate in the opera’s climax.

The classic tale of love and loss against the backdrop of war has been retold over the centuries with all the pageantry of grand operatic productions. This production strips away the supporting characters to focus on the lovers, played by veterans Keith Lai Yiu-wai and Janet Wong Kit-fong. Supporting actor Ng Lap-hei does double duty as a soldier and groom, and demonstrates his acrobatic agility with a series of tumbles and jumps, cutting through the dramatic tension.

Farewell My Concubine was Xiqu Centre’s first commissioned work and premiered in 2016. After successful tours in Hong Kong, Taiwan, Singapore and the Chinese mainland throughout 2017, the production garnered critical acclaim including winning Best Experimental Xiqu award at the China (Beijing) Performing Arts Expo 2018.

It returned to Hong Kong as part of a planned festival of six experimental performances that originally included troupes from the Chinese mainland and Taiwan. Due to the pandemic, only two shows were mounted, with the rest morphing into sharing sessions featuring key players.

True to the genre

One of the most striking aspects of Farewell My Concubine is its minimal set. The first and last scenes take place on a bare stage, while the central scenes between Xiang and Yuji include a table, two chairs and drinking vessels as the only props. The modern black box theater allows audiences to focus on the drama, costumes and music. Similarly, lighting is in line with 21st century staging. For example, the use of a single blue light during Xiang’s final moments underscores his despair while updating the production for contemporary expectations.

While the set may be bare, extravagant costumes and makeup techniques are solid tributes to the genre. Xiang’s resplendent head gear reinforces his power and glory, while Yuji’s grace is demonstrated with each toss of her glittering jewels. Every expression on her face is heightened by her elaborate makeup and carefully coiffed hair. The couple’s matching robes of yellow gold are contrasted with embroidery of stylized dragons for him and delicate floral motifs for her.

Music plays a vital part of Cantonese opera and the orchestra is prominent, divided roughly into string/wind and percussion on either side of the stage. Led by Share Ka-Kok, percussions head Chan Ting-pong dominates key scenes with deft mastery of the tanggu drum. Lai and Wong were responsible for arranging the music, directing and playwriting, besides playing the lead roles. Their intimate understanding of the opera is clear through precise timing and dramatic flourishes to heighten emotion.

Running at just over an hour, Farewell My Concubine is an accessible way to deep dive into Cantonese opera. It retains all of the spectacle and emotional punch associated with the genre, within the comfort of contemporary and professional surrounds to enhance the experience.