By Xin Wen in Xi’an 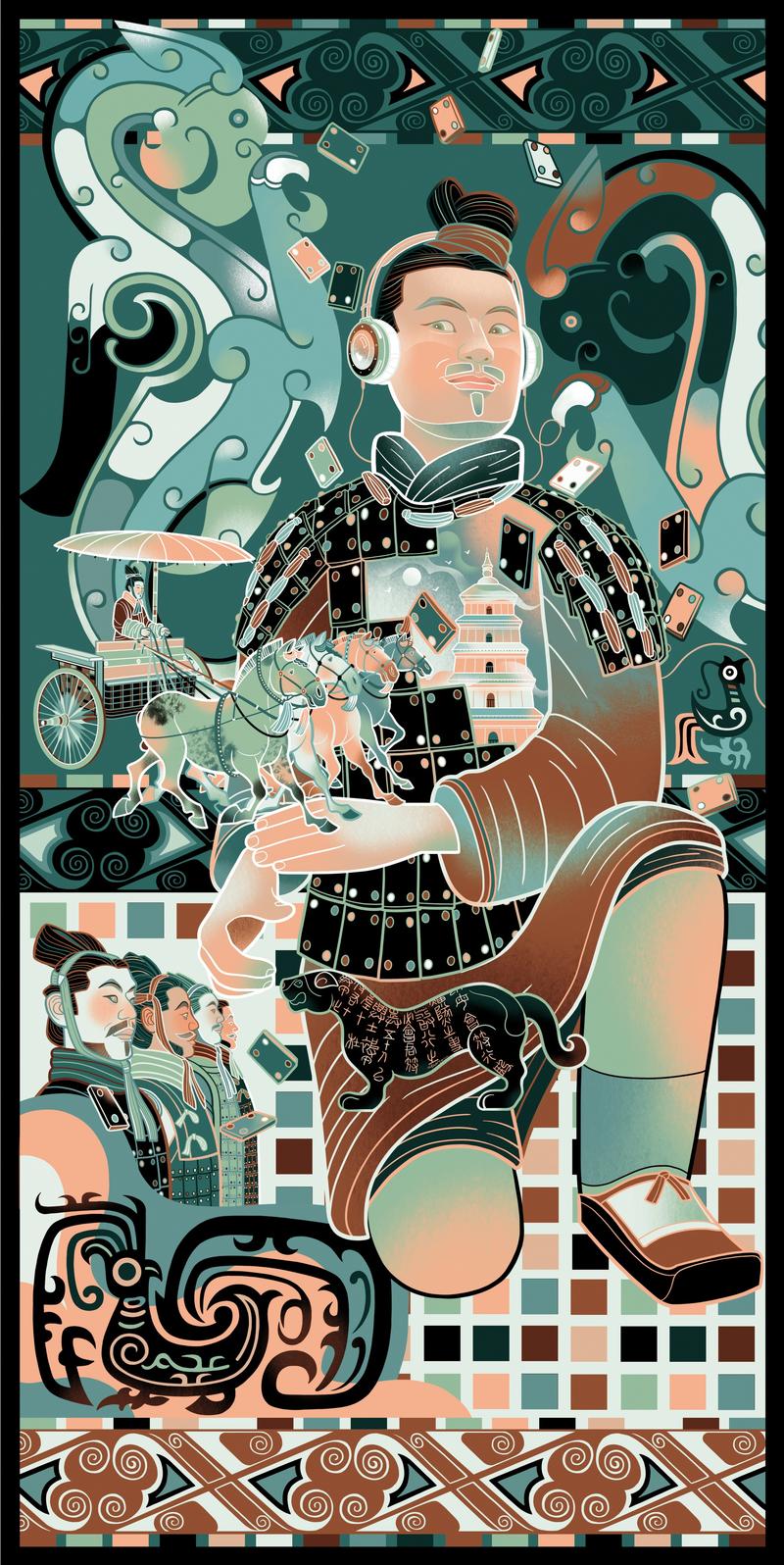 Lan Desheng picked up a sand-colored pottery shard, surveyed the fragment and fitted it into the back of a Terracotta Warrior figure.

The 52-year-old conservator-restorer is part of a specialist team piecing together and repairing the Terracotta Army, which was discovered at the Mausoleum of the First Qin Emperor in Xi’an, Shaanxi province, in March 1974.

Pointing to life-size Terracotta Warriors wearing suits of armor and with their hair in buns, Lan said: “These are pieces of history that have been vividly preserved. More than 2,000 years have slipped by, and you can still sense the huge amount of talent that went into making these figures.”

Lan said the team aims to restore the relics’ original appearance by applying the principle of minimum intervention.

On-site “first aid” is a key element of the work. In the tomb pits where the relics were discovered, some 15 conservator-restorers toil day and night. Work tables are placed in the corners of the pits, on which gray-uniformed restorers arrange different sets of tools.

Wang Chunyan, a researcher at Emperor Qinshihuang’s Mausoleum Site Museum, is responsible for the on-site emergency protection of the cultural relics.

One afternoon in late September, as she carried out a routine inspection of the Terracotta Army No 1 pit, Wang’s attention was drawn to the head of a Terracotta Warrior. The head had undergone four months of repairs and cleaning work on it was due to be completed soon.

“There was still some dirt on the right eyebrow, which had not been fully cleaned,” she said, adding that such dirt is sought by researchers to further their work.

The layer of varnish on newly unearthed Terracotta Warriors in the funerary pits warps and shrinks within minutes of them being found, due to sudden changes in temperature and humidity. The colorful artwork on the figures also quickly peels off.

Wang said: “The greatest effort we make to safeguard the Terracotta Warriors goes into protecting the varnish and colorful painting.”

Menthol is used for this work. After heating it to form an organic solvent, Wang said the conservator-restorers sprinkle fusant, a type of solution obtained during this process, on fabric, which is used to daub and reinforce the excavated figures. After the solution solidifies, the relics are taken to a “recovery room”.

In 1974, the Terracotta Warriors were found by villagers in Xi’an’s Lintong district.

The figures, commissioned by Emperor Qin, have undergone three archaeological excavations, with the first spanning more than six years.

The second took place in 1985 but was suddenly halted, as there were only limited ways to protect the colorful painting on the figures at the time.

The most recent excavation started in 2009, when the National Cultural Heritage Administration approved the resumption of work in a section of the No 1 pit.

Lan, the conservator-restorer, has restored pottery shards from more than 150 figures since the excavation resumed.

“The Terracotta Warriors feature colorful painting and even the fingerprints of the craftsmen who made them. The artisans’ names are also etched on them, but they can be hard to find,” Lan said. 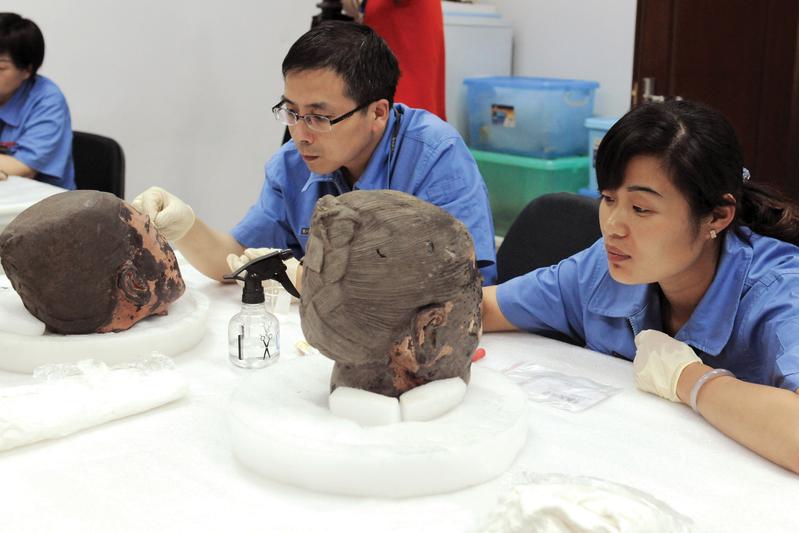 Restorers clean heads of warriors in the laboratory. (ZHANG TIANZHU / FOR CHINA DAILY)

“If you look closely at the pottery shards, you can see traces of the artisans’ fingerprints and complete palm prints left after they vigorously slapped the clay. There are also traces of the hairs they shed,” Lan said.

Using his experience, Lan can tell precisely whether the Terracotta Warriors were made by craftsmen from the Qin Court or by local artisans, as their work is quite different.

During the past 25 years, as a researcher with the Emperor Qinshihuang’s Mausoleum Site Museum, Lan has restored more than 150 of the figures.

In 1993, Lan graduated from Northwest University in Xi’an with a major in cultural heritage, and three years later, he started work on restoring Terracotta Warriors.

The conservator-restorers face a strict training program. In the first two years, Lan was not allowed to touch the relics and was told to “observe, remember and read”.

His first task after his training ended was to locate fragments and search for missing parts of the figures among the piled shards.

Now, walking along the No 2 pit, which contains figures of the warriors and their horses, Lan proudly points to them and states: “I repaired two of these pieces.”

The technology used to restore the figures has changed over the years, but the fundamental methods remain the same.

After fragments of the warriors and horses are collected, the restorers attempt to piece them together before using glue to bind them.

Over the decades, the restorers have become accustomed to delays and the fact that hardly anything can be done immediately. Patience is essential.

Lan, who approaches his work with passion, set up a special operations table at the No 1 pit. Sets of repair tools, including magnifying glasses, brushes and surgical knives, are placed on the table.

Lan has a special set of tools he uses to clean and repair the figures. After a period of study in Germany, he even returned home with scalpels.

“They are extremely sharp and useful for restoration work,” he said.

Lan also has some traditional tools, which he uses frequently. About 10 years ago, he asked a carpenter in a nearby village to make him a wooden stake.

Two sticks at the top of the stake can be removed, allowing restorers to put the upper part of a warrior’s body on it. The lower part of the body is later rejoined to the upper.

“Some industrial design researchers offered me a new steel stake, but for now, I prefer to use this one, as it’s simple and convenient,” Lan said.

He often imagines himself as a doctor diagnosing diseases during the Qin Dynasty (221-206 BC).

“There are many different types of doctors in the world, but few could have diagnosed and treated those Qin warriors, who lived over 2,000 years ago,” Lan said.

Over the years, the Terracotta Warrior pits have experienced fires, collapses and flooding. Sometimes, the conservator-restorers have also been unable to restore the warriors’ original appearance. 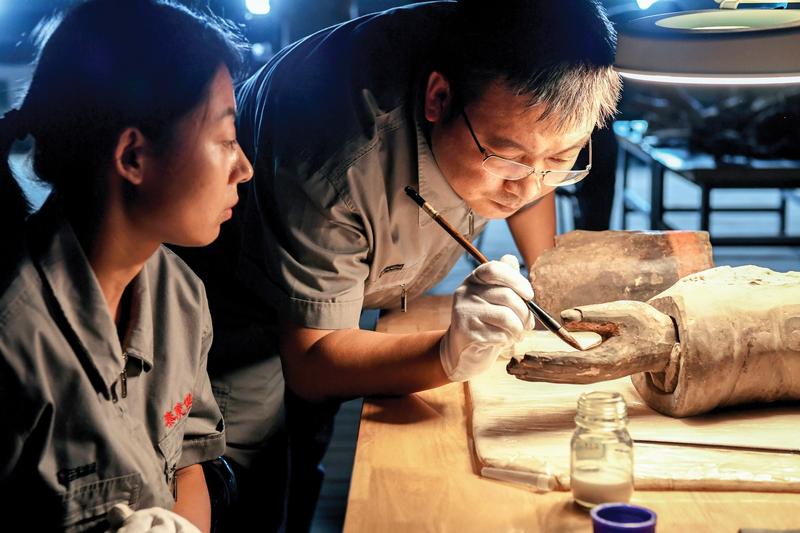 Legend has it that the troops of Xiang Yu, a warlord in the late Qin Dynasty, once opened a burial pit and removed weapons held by the figures. Many of the figures were reportedly smashed.

“In some cases, we have been unable to locate the remaining parts of Terracotta Warriors that have been assembled for the past year or two. When this happens, there is nothing to do but stop work,” Lan said.

In the No 1 pit work area, there are many half-completed figures — some with missing arms and others with smashed legs bound with rope.

“We sometimes have to stop halfway through the restoration work and wait for up to two, three or four years to find the remaining parts. However, there is always the possibility that they won’t be located,” Lan added.

Ma Yu, a 48-year-old conservator-restorer, who has been in the industry 28 years, is a pioneer in restoring different types of terracotta figures during each excavation.

During research and restoration work on figures of acrobats excavated in 1999, Ma used modern techniques to record and study the newly unearthed relics.

In 1996, he attended a two-year training course in Xi’an sponsored by the Italian government, during which he was taught by academics and researchers from Rome.

Ma uses modern equipment, including an ultra-depth-of-field microscope, to minutely examine each piece of pottery in the studio.

New discoveries always give Ma a buzz. During restoration work, he accidentally found some high-resolution and complete fingerprints, which could provide vital clues to the figures’ age, gender and athletic prowess.

“My aim is to do everything conscientiously — it’s vital to restore the relics,” he said.

To date, Lan has spotted the names of more than 100 craftsmen etched neatly on different parts of the Terracotta Warriors.

He said: “We employ materials used in the Qin Dynasty to restore and repair the warriors and their horses — a legacy we will bequeath to the next generation.

“I hope that in the future, when more advanced technology or new restoration methods emerge, conservator-restorers can repair the relics based on the foundations we have laid and better restore them to their original state.”

Jian Min contributed to this story.