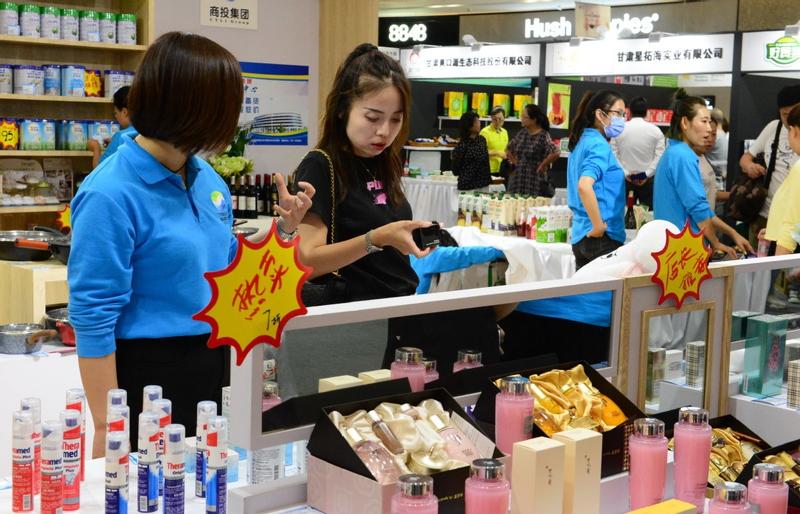 A shopper looks at cosmetics during a sales promotion in Lanzhou, Gansu province. (PHOTO / CHINA DAILY)

Editor's note: The Fifth Plenary Session of the 19th Central Committee of the Communist Party of China, which concluded last week, proposed major social and economic development targets for the 14th Five-Year Plan (2021-25) period. China Daily will run a series of stories about the plan. This story is about China's efforts to further expand the domestic market and foster a new development pattern.

China must firmly adhere to the strategy of further fueling domestic consumption growth, because the stronger the domestic market is, the more viable "dual-circulation" development will be and the greater contribution the Chinese economy will make to the world, according to the country's top leadership and analysts.

President Xi Jinping has called for expanding domestic consumption so that all links including production, distribution, logistics and consumption can rely more on the domestic market to sustain a positive growth cycle

President Xi Jinping has called for expanding domestic consumption so that all links including production, distribution, logistics and consumption can rely more on the domestic market to sustain a positive growth cycle, according to an article published in the latest issue of Qiushi Journal, the flagship magazine of the Communist Party of China Central Committee.

A concept first put forward in May, the dual-circulation development pattern is defined as "taking the domestic market as the mainstay while the domestic and international markets complement each other".

With a population of 1.4 billion, and per capita GDP exceeding US$10,000, China has become the world's most populous consumer market with unparalleled potential.

Together with modern technology and manufacturing, domestic consumption upgrading has huge growth potential, he said in the article.

Xi also stressed that expanding domestic demand and opening-up do not contradict each other.

The communique of the Fifth Plenary Session of the 19th Central Committee of the CPC, released on Oct 29, said the country will integrate the strategies of expanding domestic demand and deepening supply-side structural reforms, to create and promote new demand through innovation-driven, high-quality supplies.

The country will stimulate the domestic market and let the domestic and international markets reinforce each other, spurring consumption in an all-around way and expanding investment, the communique said.

Analysts said the dual-circulation development strategy mentioned in the development objectives proposed for the 14th Five-Year Plan (2021-25) period is the country's latest answer to deal with internal challenges and external uncertainties.

They said that after the 2008 global financial crisis, China had already put forward the strategy of domestic market expansion, and the new strategy, emphasizing the domestic market, is a strategic decision to transform challenges and a crisis into opportunities securing high-quality development under new circumstances.

Liu Yuanchun, vice-president of Renmin University of China, said that China has the industrial and market foundations to realize the dual-circulation development strategy, and to build a secure and resilient economic system, the country needs to focus on the domestic market.

"The domestic market is the key to the overall improvement of China's competitiveness, moving up the value chain and building a secure and efficient economic system," he said.

According to a recent report from the National Institute of Finance and Development, household consumption makes a relatively low contribution to China's GDP, which is associated with the low share of the service sector in the Chinese economy, and also because people's disposable incomes are insufficient to support strong spending.

In 2018, China's household consumption accounted for only 39 percent of GDP, 20 percentage points lower than the global average level, according to the report.

Commenting on China's development objectives for the upcoming 14th Five-Year Plan period, Cao Yuanzheng, chairman of BOCI Research Co Ltd, said the success of the dual-circulation development pattern depends on the growth of people's incomes, especially that of the low and lower-middle income groups.

Chinese people's incomes have exponentially increased over the past 40 years, but the income growth of the low and lower-middle income groups mostly relies on earnings related to job opportunities during industrialization and urbanization, he said.

As China's current urbanization rate is about 61 percent, lagging behind the 75 to 80 percent in developed countries, the income growth potential is huge, yet about one-third of China's city dwellers are migrant workers, who work in cities but spend a limited amount of their income there, he said.

He suggested increasing migrant workers' disposable incomes to tap their spending power through measures such as new urbanization and reform of the rural land system.

The dual-circulation development strategy, centering on the domestic market, is also part of China's efforts to optimize and stabilize the industrial and supply chains amid economic transformation and upgrading, experts said.

The China Macroeconomy Forum said in a recent report that China needs to move up the global industrial chain and foster new growth drivers.

More efforts are needed to accelerate the process of urbanization, spur domestic consumption, level the playing field, speed up industrial development and further strengthen the industrial and value chains, she said.