Xi: No nation should act like boss of the world 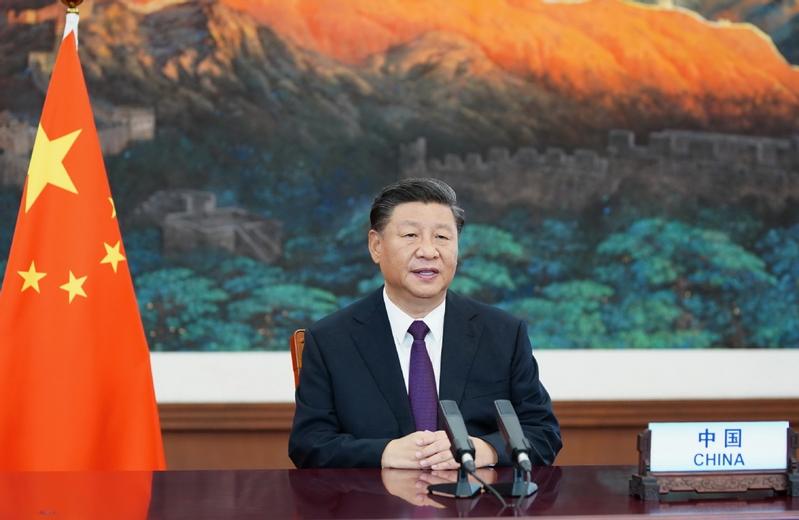 President Xi Jinping delivers a speech via video from Beijing to a high-level meeting in honor of the United Nations' 75th anniversary on Sept 21, 2020. (PHOTO / XINHUA)

Xi made the remark in a video speech delivered at a high-level meeting in honor of the UN's 75th anniversary.

"No country has the right to dominate global affairs, control the destiny of others or keep advantages in development all to itself," Xi said.

Unilateralism is a dead end.

Noting that the UN must stand firm for justice, Xi said that mutual respect and equality among all countries, big or small, is the foremost principle of the UN Charter.

No country should be allowed to do whatever it likes and be the hegemon or bully, Xi said. "Unilateralism is a dead end," he said.

Xi pointed out that it is imperative that the representation and voice of developing countries be increased so that the UN is more balanced in reflecting the interests of the majority of countries in the world.

Big countries should lead by example in advocating and upholding the international rule of law and in honoring their commitments, Xi said.

International laws should not be distorted or used as a pretext to undermine other countries' legitimate rights and interests or world peace and stability, he added.

Xi said that a Cold War mentality, ideological lines or a zero-sum game are no solution to a country's own problems, still less an answer to mankind's common challenges.

"What we need to do is to replace conflict with dialogue, coercion with consultation and zero-sum with win-win," he said.

Xi reaffirmed China's commitment to following multilateralism, saying that the country will stay actively engaged in reforming and developing the global governance system

Xi called on UN members to focus on real action, rather than just talk, to put into practice the principle of multilateralism.

The UN should aim at problem-solving and move toward tangible outcomes as it advances security, development and human rights in parallel, he said.

Xi reaffirmed China's commitment to following multilateralism, saying that the country will stay actively engaged in reforming and developing the global governance system.

Xi spoke highly of the role played by the UN in promoting peace and stability of the world since the organization's establishment in 1945, with a great many countries having gained national independence and over 1 billion people having emerged from poverty since then.

Noting that problems facing the world are big and global challenges are on the increase, Xi said the problems can only be resolved through dialogue and cooperation.

"The understanding that we are all in the same boat is now the popular consensus in the global community," he said.

China is a founding member of the UN and the only developing country that has a permanent seat on the UN Security Council. The theme of the high-level meeting is "The future we want, the United Nations we need: reaffirming our collective commitment to multilateralism."