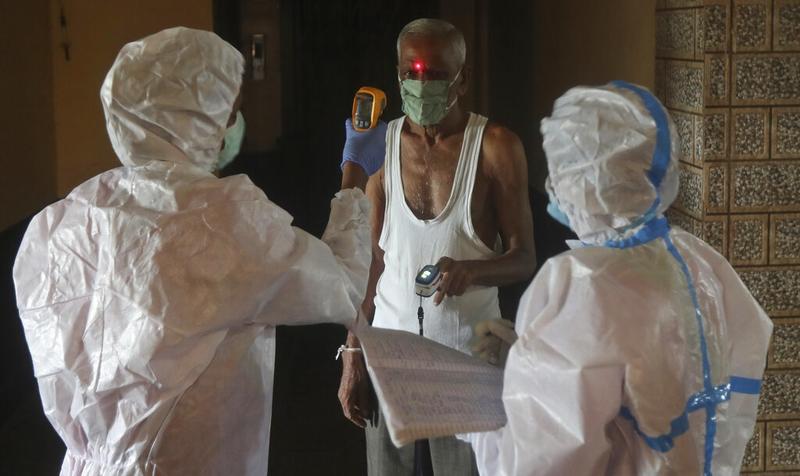 SYDENY / DUBAI / SEOUL / SINGAPORE / MUMBAI / NEW DELHI - A well-known Hindu temple in India has seen more than 700 cases of the novel coronavirus among its staff in the past two months, a temple official said on Monday, as cases in the country surged past 2.2 million.

India reported a near-record 62,064 new cases of the virus in the past 24 hours, according to federal health data released on Monday, taking its total number of cases to more than 2.2 million.

India has fewer cases than only the United States and Brazil, though it has reported a relatively low number of deaths, at fewer than 45,000, although epidemiologists say the peak of its outbreak could be months away.

Cases in India have been spreading from urban areas to smaller towns and the countryside, where health infrastructure is already over-burdened.

The Lord Venkateswara temple in the town of Tirumala in south India, one of the biggest and most wealthy Hindu shrines in the world, said two of its staff and one former employee had died of COVID-19 since June 11, when it reopened to the public after a government lockdown.

In all, 743 temple employees had been infected by the virus, it said. 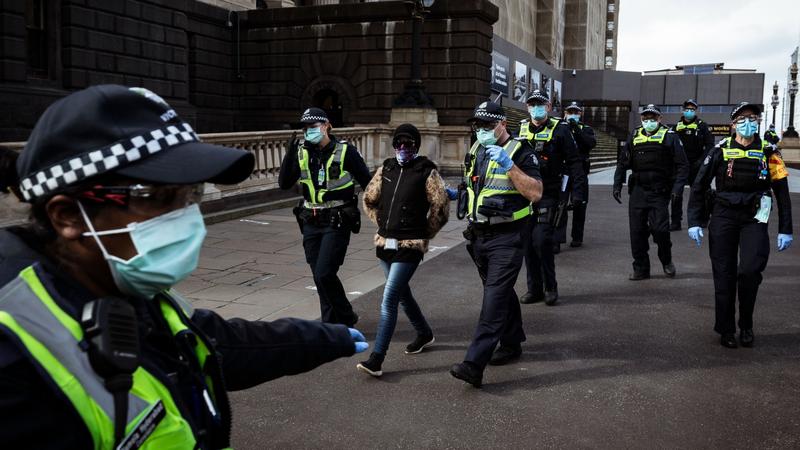 Police detain a protester at a proposed anti-lockdown rally in Melbourne on Aug 9. (PHOTO / BLOOMBERG)

There was, however, some evidence that drastic lockdown measures in the city of Melbourne were having an effect, with daily new infections in the state of Victoria slowing to a near two week low.

Officials in Victoria state, which is the epicentre of Australia’s second coronavirus wave, reported that 19 people died from the virus over the past 24 hours.

337 new coronavirus cases were reported across the country in the last 24 hours, the lowest number of single day new infections since July 29.

“We are now seeing the first promising signs of a significant decline in the number of cases.”Michael Kidd, Australia’s deputy chief medical officer, told reporters.

Australia has recorded about 21,000 COVID-19 cases, and 314 deaths, still far fewer than many other developed nations.

Seven COVID-19 patients succumbed to the virus, taking the number of people who lost their lives to 1,328 since the outbreak of the pandemic in February.

The latest cases were detected on Cambodian men, aged between 23 and 26, who arrived in Cambodia late last month from Indonesia via a direct flight, according to the statement.

According to the ministry, 1,284 more people were discharged from hospitals, bringing the total number of recovered patients to 82,236.

Iran recorded 2,132 new COVID-19 cases during the past 24 hours, bringing the total number of infections to 328,844 on Monday, Sima Sadat Lari, spokeswoman for the health ministry, said at her daily update.

According to the state TV, Lari said that the death toll from the virus in the country rose to 18,616 after 189 new deaths were added overnight.

Out of the new patients, 1,067 were hospitalized, she said.

The health spokeswoman noted that 2,711,817 lab tests for COVID-19 have been carried out in Iran.

The Iraqi Health Ministry on Monday recorded 3,484 new COVID-19 cases, the highest daily increase since the outbreak of the disease, while an Iraqi health official said that Iraq is communicating with advanced companies producing coronavirus vaccines.

The new cases brought the total nationwide infections to 153,599, as the ministry's health teams and institutions have used 19,663 testing kits across the country during the day, raising the total testing kits used so far to 1,165,049, the ministry said in a statement.

It also reported 72 fatalities during the day, raising the death toll to 5,464, while 2,015 more patients recovered in the day, bringing the total number of recoveries to 109,790.

Meanwhile, the Deputy Health Minister Hazim al-Jumaili said in a statement that the ministry is following-up advanced international companies producing the anti-COVID-19 vaccine. 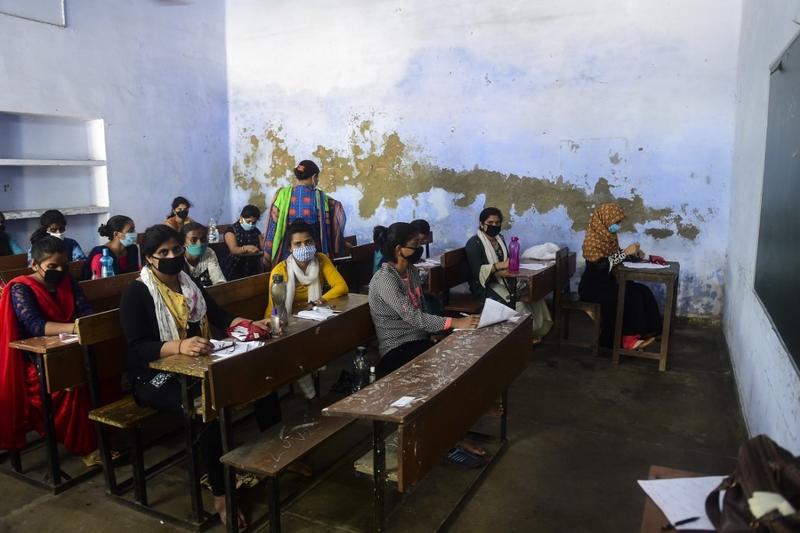 The death toll of the virus in Israel increased to 600 while the recoveries rose to 57,533.

The number of COVID-19 cases in Japan increased by 761 to reach 49,671 on Monday, according to Japan's health ministry and local governments.

The total number of infections excludes the 712 cases from the virus-hit Diamond Princess cruise ship quarantined in Yokohama in February.

The new daily addition dropped down the 1,000 mark on Monday after the number surpassed 1,200 for six straight days and peaked at 1,605 on Friday.

Among the new cases, 11 are medical workers, bringing the total number of infected medical workers to 2,959, including 2,178 recoveries, according to the latest report from the country's headquarters on COVID-19.

Jordan recorded six news cases of coronavirus, increasing the total number of infections since the outbreak of the pandemic to 1,252.

A total of 31,103 people in Laos have received COVID-19 tests since January, according to Lao Ministry of Health report.

Laos has conducted 31,103 tests for COVID-19 since January, with 20 of them positive and 19 patients have been discharged from the hospitals, according to a report from Lao Ministry of Health on Sunday.

The number of COVID-19 cases in Maldives has crossed the 5,000 mark as the government cracks down on violations of health and safety protocols, local media reported here Monday.

A total of 143 new COVID-19 cases were confirmed in Maldives on Sunday, including 107 Maldives nationals, 28 Bangladeshis, six Indians and two Nepalese, according to information shared by the country's Health Protection Agency (HPA).

The total number of confirmed cases now stands at 5,041, out of which 2,218 are active, with 140 of these having been hospitalised for treatment. A total of 1,478 individuals are currently being held in isolation facilities while 19 have died of the virus so far.

New Zealanders who come home for less than 90 days and those who go overseas after regulations come into force and return at a later date, will be charged for compulsory 14-day managed isolation and quarantine, unless they are exempt or are granted a waiver from payment.

Oman's Ministry of Health announced 223 new infections, raising the total number of COVID-19 cases in the country to 81,580, including 513 deaths and 74,691 recoveries.

Palestine reported 277 new COVID-19 cases, raising the tally of infections in the Palestinian territories to 18,651, including 10,278 recoveries and 104 deaths.

Laos has conducted 31,103 tests for COVID-19 since January, with 20 of them positive and 19 patients have been discharged from the hospitals, according to a report from Lao Ministry of Health on Sunday. 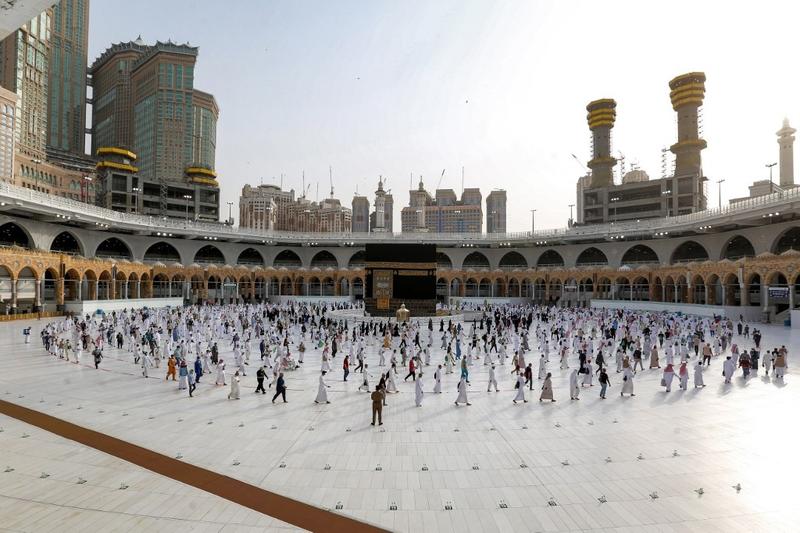 Muslim pilgrims circumambulate around the Kaaba, Islam's holiest shrine, at the centre of the Grand Mosque in the holy city of Mecca, while mask-clad and along specific pre-ordained rings as measures due to the COVID-19 coronavirus pandemic, on August 2, 2020. (PHOTO / AFP)

Saudi Arabia plans to conduct a clinical trial of a coronavirus vaccine developed by China’s CanSino Biologics on at least 5,000 volunteers. The vaccine has produced an immune response in earlier trials in China.

The trial in Saudi Arabia will be conducted in Riyadh, Mecca and Dammam, with one group of participants receiving a low dose of vaccine and the other a placebo, the Health Ministry said in a statement on Saturday.

Singapore's Ministry of Health (MOH) reported 175 new COVID-19 cases on Sunday, bringing the total confirmed cases in the country to 55,104.

Of the new cases, three are imported cases, one is community case and the rest are linked with the dormitories of foreign workers.

The daily caseload moved between 20 and 50 in recent days due to small cluster infections and imported cases.

Of the new cases, 11 were imported from overseas, lifting the combined figure to 2,561.

All state-owned schools across Sri Lanka re-opened on Monday after being shut for over a month amid the COVID-19 pandemic which has infected more than 2,800 people in the island country, the Education Ministry said.

The death toll from the virus in the country rose to 5,844 after 15 new fatalities were added in the past 24 hours, Koca said, adding 1,103 more patients recovered, raising the total recoveries to 223,759.

The United Arab Emirates (UAE) announced 225 new COVID-19 cases and one more death, taking the total infections to 62,525 and the death toll to 357.

The total number of recoveries from the virus in the UAE increased to 56,568 after 323 more fully recovered.

The total number of coronavirus cases in Yemen's government-controlled provinces increased to 1,804 after seven new cases were added.

The number of recoveries in the government-controlled areas, including the southern port city of Aden, increased to 913 and the death toll climbed to 515.

Kuwait on Monday reported 687 new COVID-19 cases and four more deaths, raising the tally of infections to 72,400 and the death toll to 482, the Health Ministry said in a statement.

Currently, 7,890 patients are receiving treatment, including 117 in ICU, the statement added.

The ministry also announced the recovery of 509 more patients, raising the total recoveries in the country to 64,028.

Another 19 cases have been released, bringing the total cured and discharged to 8,803 or 96.8 percent of all cases.

Of the remaining 166 active cases, one is being held in intensive care and no cases are in need of assisted breathing.

Bangladesh reported nearly 3,000 new COVID-19 cases on Monday, taking the total to 260,507, with more than half of the patients having recovered.

Nasima Sultana, a senior Health Ministry official, said in a briefing in Dhaka Monday that "2,907 new COVID-19 positive cases and 39 deaths were reported in the last 24 hours across Bangladesh."

She said the total number of recovered patients in the country now stands at 150,437, including 2,067 new recoveries on Monday.

The number of confirmed COVID-19 cases in the Philippines surged to 136,638 after the Department of Health (DOH) reported record high 6,958 new daily cases on Monday.

The DOH said that the number of recoveries further rose to 68,159 after 633 more patients have survived the disease.

The death toll also increased to 2,293 after 24 more patients have succumbed to the viral disease, the DOH added.

Vietnam reported six new cases of COVID-19 infection on Monday, bringing its total confirmed cases to 847, along with two more deaths from the disease, according to the Ministry of Health.

The six new cases included a man recently returning to the country from abroad, who is being quarantined and treated in southern Ho Chi Minh City.

The other five are community cases recorded in central Quang Nam province and central Da Nang city, including medical staff and relatives of previously confirmed COVID-19 cases, according to the health ministry.

The ministry confirmed on Monday that two more COVID-19 patients had died, bringing the death toll in the country to 13, noting that the two female patients, aged 33 and 47, had underlying medical conditions.

Armenia on Monday reported 23 new COVID-19 cases on Monday, bringing its total to 40,433, according to the country's center for disease control.

Data from the center showed that 96 more patients recovered in the past 24 hours, taking the total number of recoveries to 32,616.

Meanwhile, five people died in the period, raising the death toll to 796.