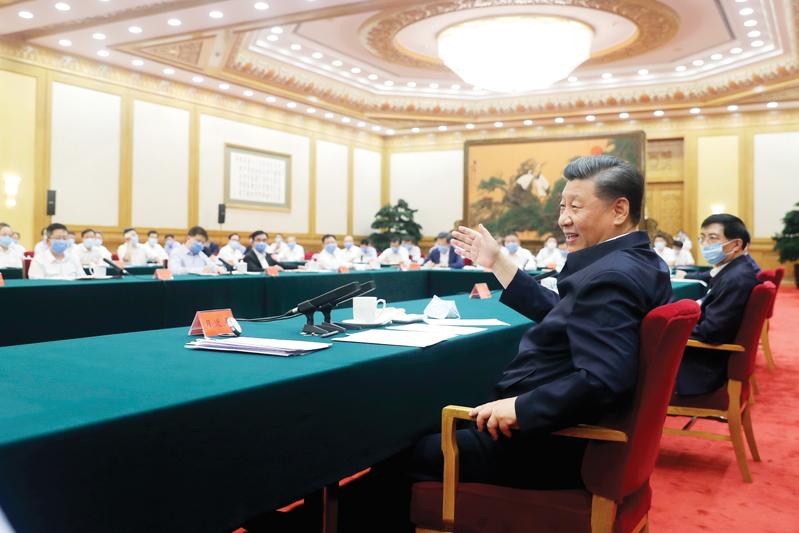 President Xi Jinping delivers a key speech on spurring the vitality of market entities and promoting entrepreneurship as he chairs a symposium with entrepreneurs in Beijing on July 21. (JU PENG / XINHUA)

President Xi Jinping called on July 21 for greater strides in reform and opening-up, including in science and technology, while fully leveraging the strength of the nation’s huge domestic market in the face of rising protectionism, a sluggish global economy and a weakening international market.

In a key speech delivered at a symposium with corporate leaders in Beijing, Xi underlined the importance of making every effort to protect market players and stimulate their vitality as the COVID-19 pandemic has hit hard the domestic and global economy.

Economic globalization remains the historical trend, with division of labor and win-win cooperation among countries being the long-term tendency, and the country must pick the right side of history, said Xi, who is also general secretary of the Communist Party of China Central Committee and chairman of the Central Military Commission.

Xi ruled out the possibility that China would close its doors during the process, saying that the country will instead fully unleash the potential of its domestic demand, enable better connectivity between the domestic and international markets and better employ the two markets and resources to attain more vigorous and sustainable development.

The country must give priority to innovation in science and technology, accelerate research of key technologies and establish new advantages in development, he added.

He noted that China’s epidemic containment has secured major strategic outcomes and its economic growth is stabilizing with positive momentum.

The country has led the global community in containing the pandemic and restoring economic recovery.

“The situation is better than expected, and we must shore up confidence, face difficulties head on and try to recover the losses from the pandemic,” he said.

China has become the world’s first major economy that has shown robust recovery from the impact of the pandemic, with its GDP expanding 3.2 percent year-on-year in the second quarter, reversing a 6.8 percent decline in the first quarter.

China will continue with measures to cut taxes, fees, rents and interest rates and ensure its various aid measures can be channeled directly to the grassroots and benefit market players, he said.

More efforts will be made to develop a business environment that is in line with market principles, the rule of law and international standards, he said, adding that equal protection will be offered to the property rights and independent operations of businesses with various forms of ownership.