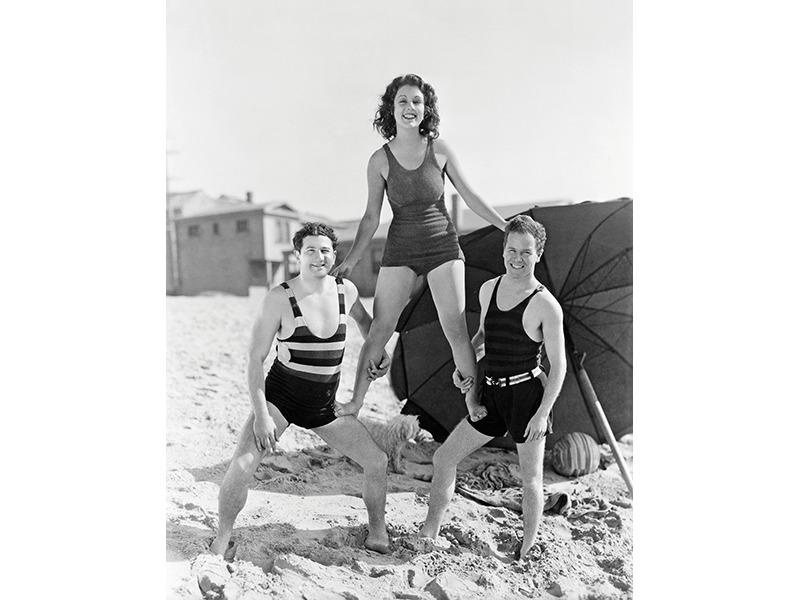 We humans have been taking to the water since time immemorial, but the two-century history of bathing and swimwear has involved several revolutions in style, fit and fabric. For centuries, swimming was a male-only preserve and the first swimmers thought nothing of jumping in the water dressed as nature intended.

In the late 19th century, many male swimmers would don cumbersome, boxy woollen garments, but by the 1920s water-clogged woven flannel swimsuits had become a sodden memory. The de rigueur fashion for suntans meant both men and women wanted more revealing, tighter-fitting costumes, and so American swimwear company Jantzen developed unisex knitted wool costumes; they became the suits that changed bathing into swimming. The Olympic swimming champion Johnny Weissmuller famously sported one of the first pairs of trunks in the ’30s and by the end of the decade, most fashioanble men swam away from the one-piece silhouette.

Numerous scientific advances and, in particular, those in the realm of textiles, led to the invention of tiny nylon and spandex briefs by US swimwear label Speedo in the late ’50s. Jumping forward to the ’90s, the same company led the emergence of super-fast full-length and half-length body suits. A red trunk-clad David Hasselhoff stomping around the babe-filled Los Angeles beaches in Baywatch helped to make trunks a must-have swimwear item for men worldwide in the ’90s, but at the same time, the surfing revolution ushered in the knee-length, loose board shorts that are one of the most common silhouettes on the world’s beaches today.

Today, recent textile innovations have played a crucial role in smashing modern Olympic records courtesy of brands such as Speedo, Arena, Nike and Adidas, in addition to resisting chlorine damage and providing essential protection against harmful UV rays. What further seismic changes will the world of swimwear fashions deliver? Ask your local scientist.