Datong barbers are a cut above competition 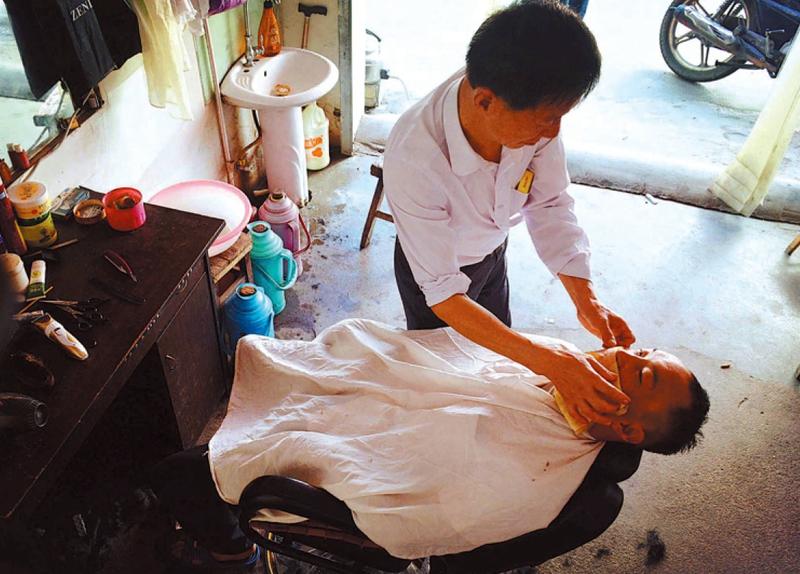 Xu Zhongxiao, a barber in Anqing, Anhui province, provides a shaving service, or xiumian, to a customer. (WU JUNQI / FOR CHINA DAILY)

HEFEI－As a sunbeam pierces through the cracks in the wooden roof and shines on a rusty chair with flower carvings, Shi Hancheng uses an old-fashioned shaver to work on the chin, cheek, ears and eyebrows of a customer.

Called xiumian or face-shaving in English, the craft is one in which Shi excels. He is a barber in Datong Barbershop, located in the Datong Ancient Town in the city of Tongling, East China's Anhui province. The barbershop was built during the late Qing Dynasty (1644-1911). A brick from a wall and various old items in the shop are witness to more than 100 years of glory and decline it has experienced.

The shop has been under spotlight as the country recently observed the Cultural and Natural Heritage Day.

Shi, 72, is one of the two senior barbers at Datong Barbershop. He came to the shop with his father to apprentice as a teenager, at a time the salon was one of the poshest places in town.

"In its prime, there were 12 chairs and 12 barbers in the shop, in addition to people who boiled water and carried water," Shi recalls. "There were 40 to 50 staff then."

All the chairs and mirrors were imported from Germany and Britain, and the barbers learned to do the most fashionable haircuts, making them renowned in the neighborhood.

At that time, the Datong Ancient Town was an important area along the Yangtze, China's longest river. It was known as one of the four major commercial hubs in Anhui, which also included Anqing, Wuhu and Bengbu. The advanced water transportation brought in countless people and bustling business, giving the town the moniker "little Shanghai".

"Day and night, there were people waiting in line to get a haircut," Shi says. "We received about 500 customers a day, and often worked until 9 pm."

In the late 20th century, however, as road transport developed, water transportation along the Yangtze declined. The ancient town gradually became desolate, and the long lines of customers in front of the barbershop became a thing of the past.

"Some of the barbers went away, and some died," Shi says. "The only ones left in the shop are me and Chen, who is already in his 80s."

Only two of the 12 chairs remain.

"Most of the people coming in these days are the elderly living in the neighborhood," Shi says. "They got their haircuts here when they were black-haired young people, and now even though they have grown old, they still come over."

Shi says when the shop is sometimes closed, the old customers drop by to ask if everything is OK.

Hu Jiafu, 57, is a regular at Datong Barbershop. Hu says coming to the salon has become a habit, and "other barbershops simply don't have that craft".

People like Hu have encouraged the two senior barbers to continue their business and stick with their brand.

"We have been here for decades, and we don't feel comfortable if we don't come over to the shop," Shi says, adding that they also go door to door to do haircuts for ageing people and those who can't walk around because of their physical condition.

In recent years, authorities have decided to develop tourism based on the history and culture of the ancient town, bringing change and hope to the shop that has lasted a century.

In 2015, the local government renovated old houses in the town, and installed modern facilities in them in 2017.

The Datong Barbershop also went through a transformation. Workers modernized the electric circuits, installed shampoo basins and faucets that invoked nostalgia, in addition to fitting electric fans and pendant lamps. The storage room on the second floor became the rest area.

The changes were part of efforts to draw more customers.

For Shi, the upgrade brought many modern elements to the shop, and he says the new features are both practical and necessary. "After the upgrade, young people sometimes come over to get a haircut," Shi says.

Shi argues that while it is important to stick to craftsmanship, changes are inevitable in the modern era because they bring long-term development.

"You can't abandon the old craft, but you also need to bring in new things," he says. "Otherwise you will be knocked out sooner or later."

Shi says he hopes more young people will help pass on the craft.

"We are getting old, but we want the shop to survive," he says. "I hope that the younger generation will inherit our craft so that it does not die out."