By Zheng Yiran and Zhang Yu 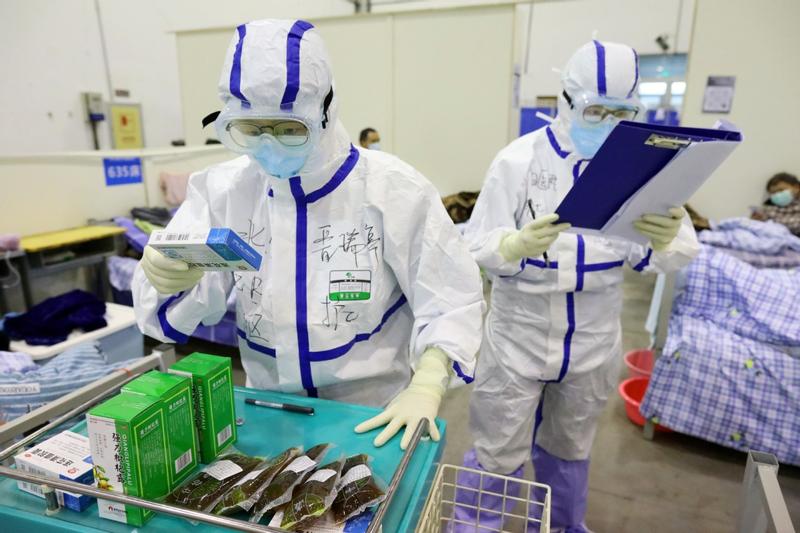 Yiling Pharma makes the herbal compound using the traditional Chinese medicine, or TCM, system. The capsules are considered effective in China against the novel coronavirus.

Koh said: "The epidemic situation in Singapore has been volatile in May. On May 10, there were 876 newly confirmed cases. The figure then dropped to 486 the next day. Then, on May 12, the figure went up again to 884.

Zhang Boli, Academician at the Chinese Academy of Engineering

"Having heard that TCM is effective in preventing and treating COVID-19, my family and I had long been thinking of getting some capsules. Initially, it was hard to buy TCM products in Singapore. Now, to our delight, Lianhuaqingwen capsules are available at local pharmacies. I bought some for my family."

Clinical observations at designated COVID-19 hospitals in China showed that a treatment combining Western medicine and TCM, including Lianhuaqingwen capsules, was effective in the treatment of COVID-19 cases.

Yiling Pharma announced in May its Lianhuaqingwen capsules had been officially listed as Chinese proprietary medicine to treat influenza by the Healthy Sciences Authority of Singapore, which meant the Chinese medicine has been granted local market access.

By now, Lianhuaqingwen has been approved for sale in eight countries outside China. They are Canada, Indonesia, Mozambique, Brazil, Romania, Thailand, Ecuador, and Singapore. It was also granted market access in Hong Kong and Macao.

Wu Rui, board director and secretary of the board of Yiling Pharma, said the international journey of Lianhuaqingwen capsules started years ago.

"To testify the effectiveness of Lianhuaqingwen capsules in the overseas markets, the company had been working with a batch of international medical and scientific research institutions on the experimental study of the medicine for many years," she said.

"In recent years, as TCM was having a constantly increasing influence over the international markets, and the foreigners' acceptance levels of TCM rose, we launched the registration of Lianhuaqingwen capsules in some countries," Wu said.

According to the company, currently, the influenza case collection of the phase-II studies of Lianhuaqingwen capsules in the US has been completed, and its registration in countries and regions in the Middle East, Africa, and Latin America has started.

Wu noted that the biggest obstacle for TCM going global is the cultural differences between East and West. Such gaps cause difficulty for Western countries in knowing more about and understanding TCM.

"Besides, each country and region have their own laws and regulations for drug registration and approval, and the differences hinder TCM from getting market access and becoming popular in overseas markets," she said.

Zhang Boli, an academician at the Chinese Academy of Engineering, said the major problem in internationalizing TCM lies in legislation, as introducing TCM into local markets requires a country to amend its own codes, which is very difficult. Therefore, currently, many TCM products are exported overseas merely as nutrition supplements.

"The wide application and significant clinical efficacy of TCM products in the fight against COVID-19 have raised their international acceptance, further opening the door for TCM to go global," Wu said.

In the COVID-19 epidemic treatment plan issued by the National Health Commission, Lianhuaqingwen capsules were the most frequently mentioned proprietary Chinese medicine, recommended by the fourth, fifth, sixth and seventh edition of the treatment plan.

The study of the effectiveness of Lianhuaqingwen capsules in treating influenza had won the second prize in the National Award for Progress in Science and Technology in 2011, demonstrating its advantage in research and development.

On May 8, the study "Efficacy and Safety of Lianhuaqingwen Capsules, a Repurposed Chinese Herb, in Patients with Coronavirus Disease 2019" was published in the European medicine journal Phytomedicine, pointing out that in light of the safety and effectiveness profiles, the TCM capsules could be considered to ameliorate clinical symptoms of COVID-19. The journal is recognized as an authoritative periodical in the international plant medicine field.

Zhang said problems such as insufficient innovation and low-level duplication were the main reasons behind the difficulties in TCM internationalization, and that a scientific TCM standard that conforms to international standards needs to be established as soon as possible.

Yiling Pharma said it will continue to explore the innovative development path of TCM internationalization. It will give full play to the company's R&D and manufacturing advantages, keep innovating, accelerate the process of TCM modernization, industrialization and internationalization, to contribute to the high-quality development of TCM.