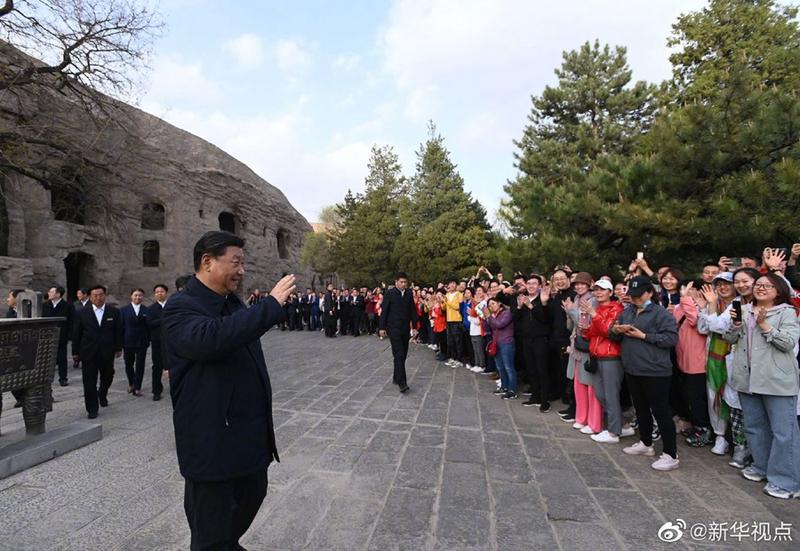 Chinese President Xi Jinping visits Yungang Grottoes to learn about the province's historical and cultural heritage protection situation during an inspection tour in Shanxi province, on May 11, 2020. (PHOTO / XINHUA)

TAIYUAN - Xi Jinping, general secretary of the Communist Party of China Central Committee, has stressed the role of daylily growing and processing in helping local people get rid of poverty.

He was happy to know that in recent years, thanks to the guidance of major enterprises and cooperatives, the farm had a stable output

Xi made the remarks while visiting an organic daylily farm in Yunzhou district of Datong city Monday afternoon during an inspection tour in North China's Shanxi province.

Xi walked into the daylily field and had a cordial conversation with villagers working there.

He was happy to know that in recent years, thanks to the guidance of major enterprises and cooperatives, the farm had a stable output and quality with a guaranteed market and price, helping lift a number of impoverished households out of poverty.

In Yunzhou district, part of the extremely poor area in the Yanshan and Taihang mountains, growing daylilies -- a kind of edible flower and traditional Chinese medicine for soothing nerves -- has become a pillar industry.

The daylily growing has a history of 600 years in Yunzhou, but there was no large-scale plantation before 2010. Over the past 10 years, the area of daylily flowers in the district has grown tenfold to around 10,000 hectares.

"My life now blossoms thanks to the daylily," said Tang Wan, a local farmer. By growing 2.67 hectares of daylilies, the once poor Tang was able to support his three children in going to college.

"The flowers have changed the lives of many. And poverty no longer bothers us," said Tang, adding the village has many "daylily college students," "daylily cars" and "daylily houses" -- phenomena that were rare before the flower was found a cash cow.

Impoverished counties in Shanxi have developed the planting of apples, potatoes and daylilies into industries to guarantee farmers stable jobs and incomes. More than 1 million people have been lifted out of poverty, said Wang Zhiqiang, a poverty alleviation official with the provincial government.

During the inspection tour, Xi also stressed the protection of the Yungang Grottoes as they are the "treasure of human civilization."

While visiting the cave art site in the city of Datong to learn about historical and cultural heritage protection, Xi carefully viewed sculptures and wall paintings and inquired about the history, artistic style and protection of the grottoes.

The Yungang Grottoes represent the characteristics of Chinese culture and the history of cultural exchanges between China and other countries, Xi said. 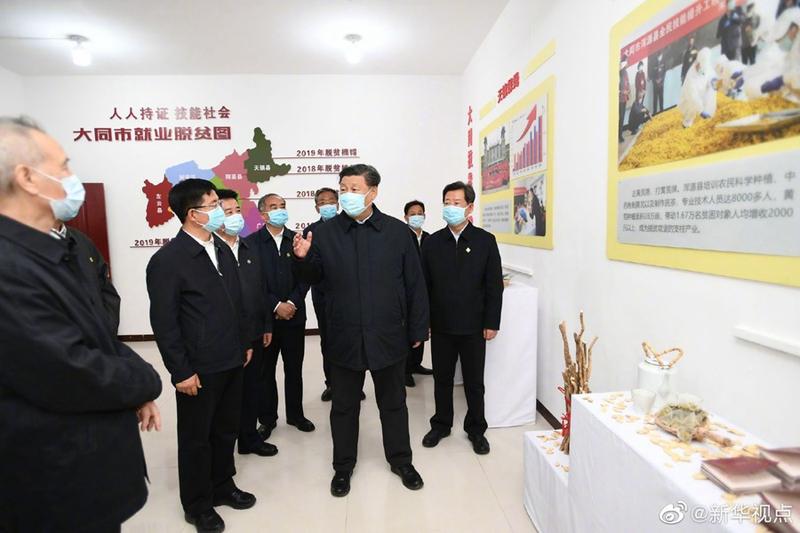 China aims to eradicate absolute poverty this year. An increasing number of industries are hiring impoverished people, bringing them jobs as well as fortune.

In a workshop of the biotech company Haifa in Yunzhou, home to 32,000 registered poor people, workers were busy sorting, drying, disinfecting and packing worms.

The dried yellow mealworms, which are rich in protein, vitamins and minerals, have been exported to the Republic of Korea, the United States and other countries.

"All the process, including the worm raising and processing, is strictly monitored, with the nutrition, microorganism and other criteria meeting the edible standard," said company chairman Wang Xizhan.

Haifa is a leading company engaged in poverty alleviation in the district by hiring 300 workers from local poor households. Li Dongxin, 44, is one of them.

Suffering from partial paralysis after a traffic accident, Li is unable to toil in the field. He is assigned with easy work in Haifa, such as feeding the worms and cleaning the worm trays. 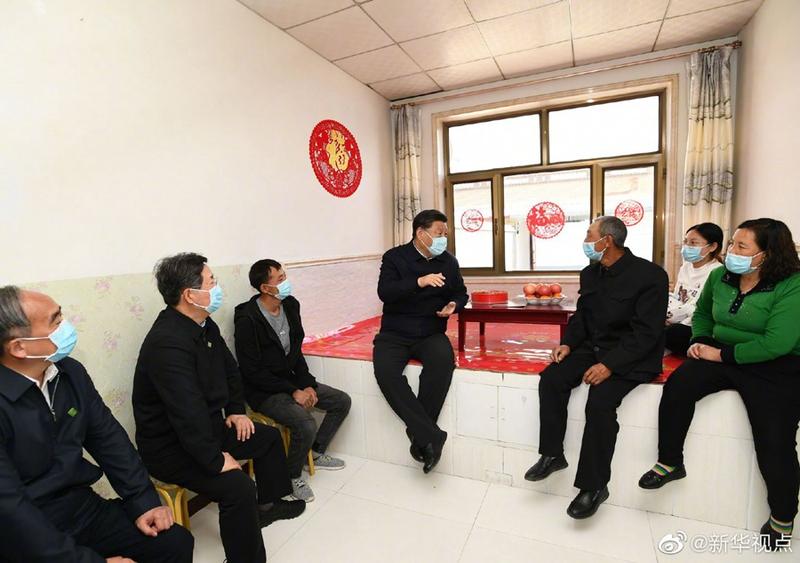 China sees rural impoverished areas as the biggest challenge of completing the tasks of building a moderately prosperous society in all respects by 2020.

During his inspection tour to the northwestern Ningxia Hui Autonomous Region in July 2016, Xi said industries should be fostered according to local conditions, as a fundamental way to advancing poverty alleviation.

From 2013 to 2019, the country lifted more than 93 million rural people out of poverty through precision measures, pairing-up aid, fostering industries such as produce processing and tourism, and relocating those in barren and remote mountainous areas to more habitable places.

By the end of last year, there were still over 5.5 million people living under the poverty line across the country.

Despite the COVID-19 impact, China is approaching its goal. A number of provinces, including eastern China's Anhui and Jiangxi, announced that all remaining listed impoverished counties have shaken off poverty this year.

"I just want to show how the fungus is grown," said Peng, adding that she plans to sell fungus bags so that netizens may plant black fungus themselves.

Peng and her husband, who used to be impoverished themselves, have more than 40 such greenhouses now, helping more than 30 households out of poverty. 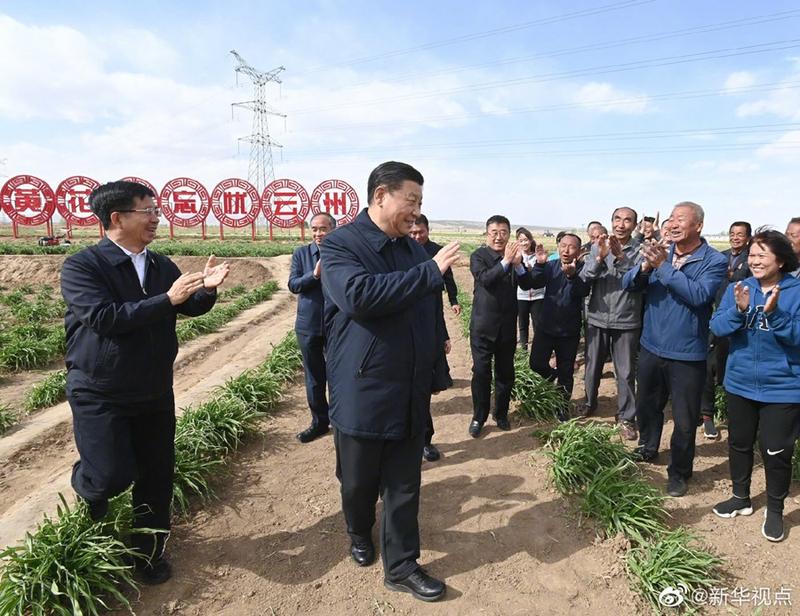 Wei Baigang, head of the development planning department of the Ministry of Agriculture and Rural Affairs, said 90 percent of the registered impoverished population received industrial and employment support, more than two-thirds of whom successfully cast off poverty by working in cities or local industries.

Learning the worms he had raised were exported and made into different kinds of food, Li felt excited and proud.

"I hope I can travel abroad someday in the future, buy some worm products and have a taste," he said.