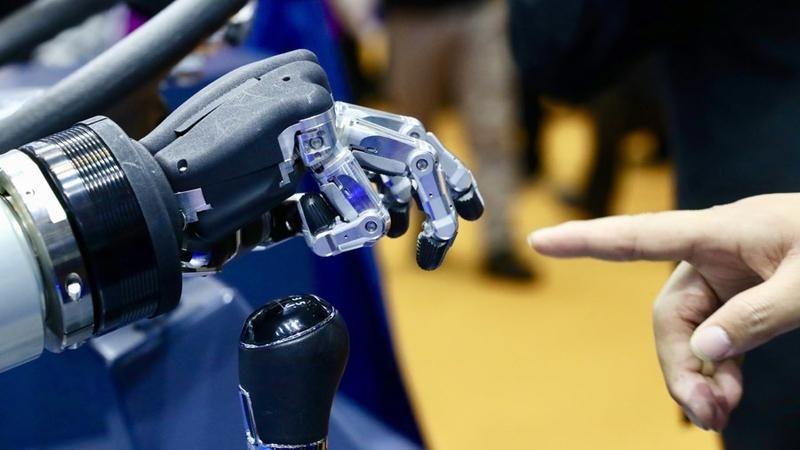 In this Nov 6, 2019 photo, a visitor touches an automated hand at an exhibition during the second CIIE in Shanghai. (ZHU XINGXIN / CHINADAILY.COM.CN)

GENEVA - China surpassed the United States in 2019 as the top source of international patent applications filed with WIPO, the World Intellectual Property Organization (WIPO) said on Tuesday in a statement.

With 58,990 applications filed in 2019 via WIPO's Patent Cooperation Treaty (PCT) System, China overtook the US, which filed 57,840 applications the same year

With 58,990 applications filed in 2019 via WIPO's Patent Cooperation Treaty (PCT) System, China overtook the US, which filed 57,840 applications the same year, as the biggest user of the PCT System, a position previously held by the US each year since the PCT began operations in 1978, according to WIPO.

In 2019, the top five users of the PCT were China, the US, Japan, Germany and South Korea. For the third consecutive year, China-based telecom giant Huawei, with 4,411 published PCT applications, was the top corporate filer in 2019.

It was followed by Mitsubishi Electric Corp of Japan, Samsung Electronics of South Korea, Qualcomm Inc of the US and Guangdong Oppo Mobile Telecommunications of China.

The top 10 applicant list comprises four companies from China, two from South Korea, and one each from Germany, Japan, Sweden and the US.

"China's rapid growth to become the top filer of international patent applications via WIPO underlines a long-term shift in the locus of innovation towards the East, with Asia-based applicants now accounting for more than half of all PCT applications," Gurry said.

While "IP is increasingly at the heart of global competition," it is important to remember that "innovation is not a zero-sum game," he added.

"A net increase in global innovation means new drugs, communications technologies, solutions for global challenges that benefit everyone, wherever they live."