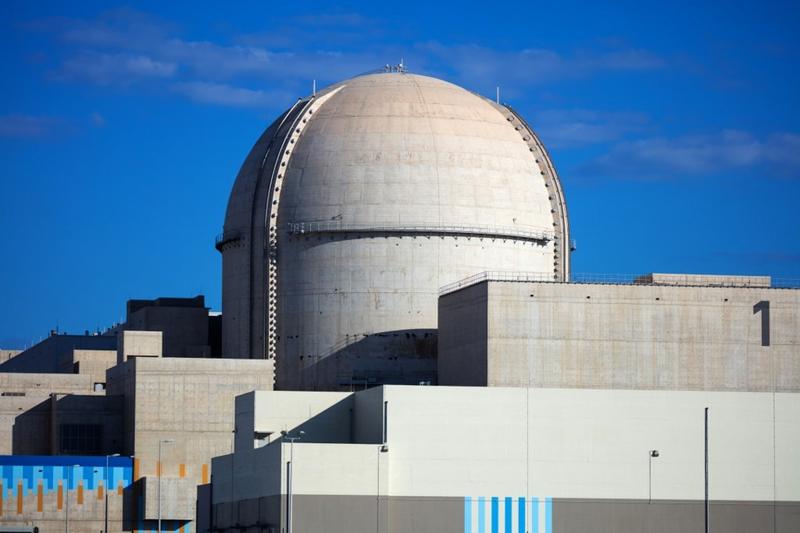 A handout picture obtained from the media office of the Barakah Nuclear Power Plant on Feb 13, 2020 shows a view of the power plant in the Gharbiya region of Abu Dhabi on the Gulf coastline about 50 kilometres west of Ruwais. (BARAKAH NUCLEAR POWER PLANT / AFP)

The United Arab Emirates took a final step toward switching on the Arab world’s first commercial nuclear power plant, even as the country prospers by producing and selling fossil fuels.

The UAE’s regulatory watchdog gave long-awaited approval on Monday to the operator of the Barakah reactor, nudging the UAE to the brink of membership in an elite club of 30 countries that make power from smashing atoms.

The UAE expects Barakah to produce as much as 5.6 gigawatts once they’re fully commissioned, or almost a fifth of the country’s current installed generating capacity

Built and run by a joint venture with Korea Electric Power Corp., the plant can now start loading fuel and ramp up to full commercial operation within several months. Other Arab countries, notably Saudi Arabia and Egypt, are also pushing into nuclear power in spite of questions about cost and safety.

“Barakah was meant to be the showcase for the international nuclear industry,” said Mycle Schneider, an independent analyst. “Grid connection is at least three years late, and there is no doubt that it is way over budget.”

Barakah is the first of four civilian reactors that the government plans to fire up by 2023. The plants, located on a sparsely populated strip of desert on the Persian Gulf coast, are estimated to cost US$25 billion. The UAE expects them to produce as much as 5.6 gigawatts once they’re fully commissioned, or almost a fifth of the country’s current installed generating capacity.

Arab nations have tried, and failed, in years past to build nuclear capabilities. Iraq under Saddam Hussein had a well-developed program until Israel, an unacknowledged nuclear state, stifled his ambitions by destroying the Osiris research reactor in an air raid in 1981. Non-Arab Iran has operated the Bushehr facility since 2011, but Tehran faces crippling US sanctions over its atomic program.

Barakah marks a new milestone for the region. The UAE, third-largest producer in the Organization of Petroleum Exporting Countries, is trying to diversify its domestic energy supply and lessen its dependence on oil. Dubai, the country’s business hub, targets meeting 75 percent of its needs from solar energy and other renewables by 2050.

Schneider questions the regional nuclear push. “Nuclear power is now clearly the most expensive form of electricity generation,” the analyst said. While the cost of solar photo-voltaic power on a utility scale has plunged 90 percent over the past decade, nuclear power costs have risen by 26 percent, Schneider said.

And while advocates of nuclear energy argue that the technology is becoming safer, opponents point to catastrophic incidents, including the meltdowns of three reactors at the Fukushima plant in northern Japan in 2011.

Nawah Energy Co. -- the venture between Kepco and state-run Emirates Nuclear Corp. that will operate all four of the UAE’s plants -- waited almost two years after the first one was completed before getting the green light from regulators to load it with fuel.

Nawah Energy “can fulfill all the safety requirements of the UAE,” Christer Viktorsson, head of the Federal Authority for Nuclear Regulation, said Monday at a news conference in Abu Dhabi.

“The UAE has to build up a domestic pool of experts in many areas to keep these plants running smoothly and efficiently,” Hibbs said. “That won’t be trivial because when this project got underway virtually all of the expertise was imported from outside.”

A government-sponsored training program has produced 380 Emirati nuclear experts, and 60 percent of ENEC’s staff are UAE citizens, according to the company.

As of 2017, the UAE had about 30.4 gigawatts in installed power-generating capacity. The vast bulk of it involves the burning of natural gas, making the country’s nuclear program a key component in the plan to diversify its energy supply and lessen its reliance on hydrocarbons.