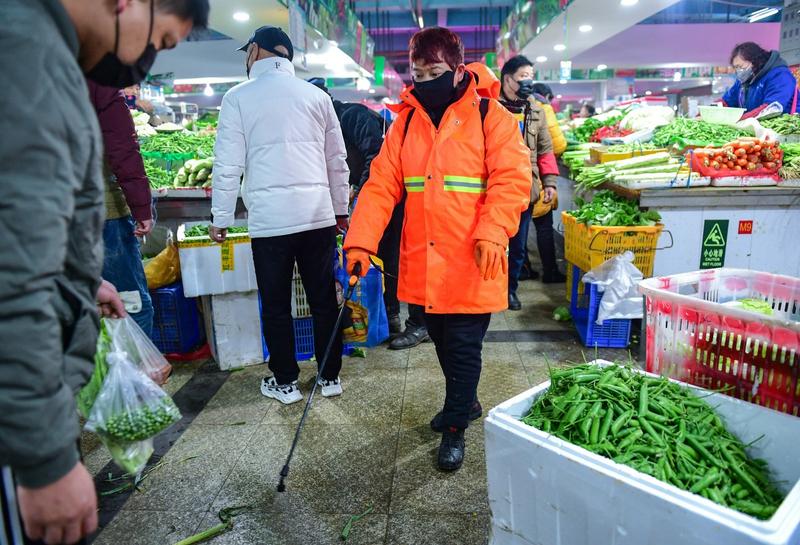 A sanitation worker disinfects the floor of a vegetable market in Wuhan, Hubei province, on Wednesday. (LIU ZHONGCHAN / FOR CHINA DAILY)

The country has kicked off a nationwide fight against the spread of the novel coronavirus.

In the early hours of Thursday, the Ministry of Industry and Information Technology allocated 10,000 protective suits and 50,000 gloves from the central medical reserve to Wuhan, Hubei province, where the coronavirus broke out, the ministry said during an emergency meeting on Thursday.

Wang Jiangping, deputy head of the ministry, asked relevant manufacturers to overcome all difficulties to resume production amid the Spring Festival holidays. All authorities and businesses must meet the demand for disease control equipment from Hubei province, 21jingji.com quoted him as saying during the meeting on Thursday.

Also on Thursday, Wang held a meeting with e-commerce giants including JD and Alibaba, asking them to provide sufficient supplies of masks and sanitizers online. The ministry will help to solve the problem of raw material shortages and logistic problems during the production and distribution of those products, Wang said.

The State Post Bureau of China has launched an emergency response mechanism to ensure that postal and courier services in high demand during the Spring Festival holidays won't be affected by the coronavirus. Furthermore, it has drafted a plan to stop hazardous packages being sent from Hubei province, where the pneumonia broke out, the bureau said in a statement on Wednesday.

The bureau has also urged postal and courier workers to take precautions during delivery and have their health monitored. Their workplaces must be kept ventilated and sanitized, the statement added.

More regions outside Wuhan have strengthened efforts to control the situation.

The city of Beijing has asked medical institutions to conduct supervision and inspection checks and opened more training for medical staff in targeted knowledge and services. It released a list of 89 medical institutions with fever clinics and guidelines for related patients. It also strengthened regulations for gathering activities during the Spring Festival.

Shanghai stopped buses traveling to Hubei province on Thursday and strengthened temperature detection for people at over 140 highway toll stations entering the city. Detection centers at airports, railway stations and inter-city bus stations are in operation.

Hubei province started prevention and control from the community and villages' level, to learn about the health condition of all residents and visitors, according to the local government.

Each region in the province needs to have at least one designated hospital, with increased preparations of beds, equipment, facilities and drugs, to make sure patients get timely treatment.

In addition, more regions in China have been strengthening cleaning and disinfection in farmers markets and public spaces, and banning the breeding, processing and trading of wild animals.

Hu Cuijuan, 28, who works for a real estate company in Wuhan, just returned home to a small city in Hebei province. She said she underwent temperature detection at railway stations in Wuhan and her hometown.

Producers of all the seven big films once aiming for the lucrative Spring Festival holiday also announced they were canceling scheduled screenings on Thursday.

Those withdrawn films include the presale champion Detective Chinatown 3, which once saw its presale receipts up more than 250 million yuan ($36.1 million), and Leap, a highly anticipated film that chronicles the striving of China's national women's volleyball team from 1981 to 2016.

Statements released by the producers mostly said that the decisions were made in consideration of the risk of spreading disease in confined spaces and they will choose later dates to release the films.