Hong Kong and UK urged to partner on projects 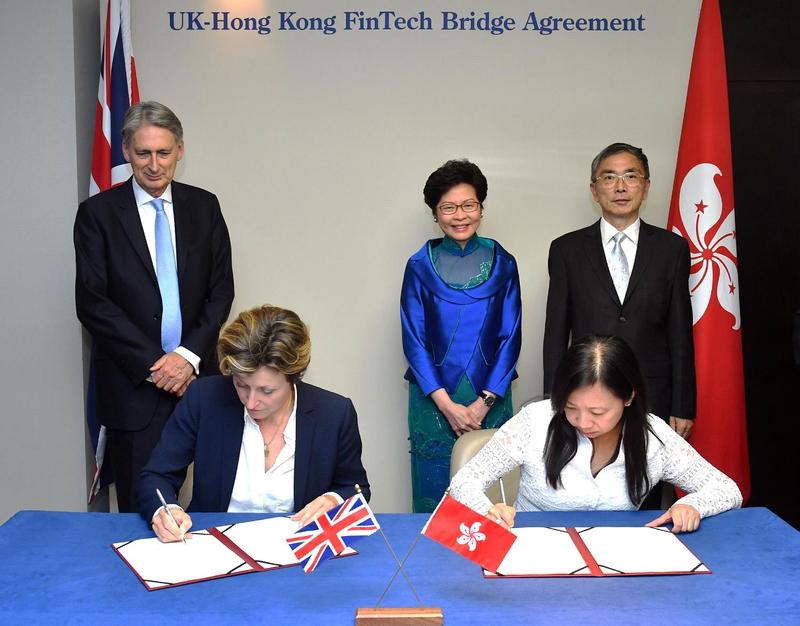 Chief Executive Carrie Lam Cheng Yuet-ngor, Secretary for Financial Services and the Treasury James Lau Yee-cheung (back row, right) and Chancellor of the Exchequer of the United Kingdom Philip Hammond (back row, left) witness the signing of the FinTech Bridge Agreement between Hong Kong and the UK in London on Wednesday.  (Provided to China Daily)

LONDON - Hong Kong wants its companies to partner with British counterparts, so they can take on projects together, both in China and other countries in the area covered by the Belt and Road Initiative, attendees of a conference in London heard on Thursday.

Chief Executive Carrie Lam Cheng Yuet-ngor spoke about opportunities to strengthen business ties with the United Kingdom at the event attended by more than 1,000 business and government representatives.

This year marks the 20th anniversary of Hong Kong’s return to China. The UK is now the special administrative region’s second-largest trading partner in Europe, with investment worth 25 billion pounds ($34 billion) at the end of 2015, a 115 percent increase on five years earlier.

Greg Hands, the UK’s minister of state for trade and investment, noted the importance of Belt and Road opportunities for British businesses and the significance of Hong Kong as a “key junction” for British companies’ engagement.

“The UK must harness our shared ties (with Hong Kong), so that our firms, from infrastructure to energy, can become partners of choice in this initiative. As global trade moves toward emerging economies, the UK will seek to open up trade with willing partners in the region, and the free trade will bring us benefits,” Hands said.

The Belt and Road Initiative seeks to boost trade and investment ties between Asia and Europe by strengthening infrastructure connectivity.

Earlier this month, the HKTDC hosted a Belt and Road Summit attended by more than 3,000 participants, including representatives from 170 infrastructure projects.

One day before the conference, the Hong Kong SAR and the UK government signed a strategic agreement to explore collaboration. They also signed a separate agreement to strengthen financial technology cooperation.

“It will further enhance the growth of Hong Kong investment in the UK and attract firms to establish in Hong Kong and the Chinese mainland,” Law said.

The UK government will also support a festival to showcase the best of the UK’s innovation and creative sector companies.

Jon Lowe in Hong Kong contributed to this story.