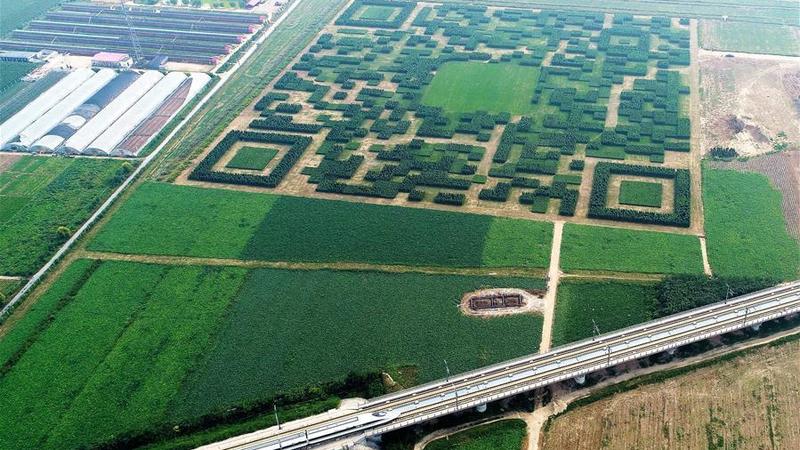 SHIJIAZHUANG - A giant quick response (QR) code in north China's Hebei Province has left social media users wondering what to make of the design, which can only be scanned from high above the ground.

The QR code in Xilinshui Village, Baoding City, is made up of 130,000 Chinese juniper trees arranged to cover an area of 6.7 hectares.

The QR code directs mobile users to an account that promotes local tourism.

The account is managed by Haomeng Linshui Agriculture Technological Co. Ltd, which claims to offer a wide range of services, including agricultural tourism and catering businesses. The company was founded in 2016, according to the verified account.

The story has caught the attention of netizens, but many mocked it as a publicity gimmick and questioned how mobile users were supposed to scan the code from mid-air.

"Aren't we supposed to power off our phones on airplanes?" wrote user "Ouzhoudaxizuo" on microblog Sina Weibo.

First of all, you need a helicopter

"First of all, you need a helicopter," read another Weibo comment.

Xilinshui Village boasts forests, clean rivers and beautiful mountains. It was named one of the most beautiful villages in Hebei in 2015, according to the Baoding government.

QR codes are becoming increasingly popular in China, particularly for making mobile payments, as the country moves toward a cashless society, and for publicity purposes. By the end of June 2017, China had 724 million mobile phone users.