It’s going to be a bumpy ride

Climate change is well advanced, and that spells more misery for airline passengers, as upper air turbulence will only worsen. Honey Tsang reports. 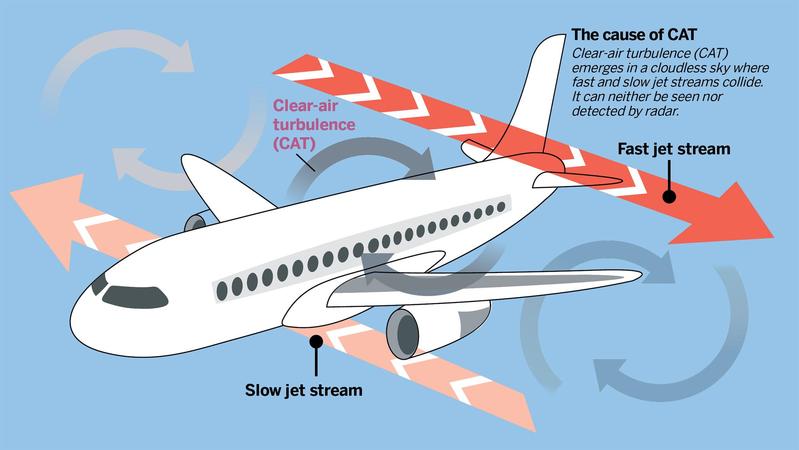 The Boeing 747 plummeted for what seemed 1,000 feet, Fung Wing-ho seized the armrests, as the shock lifted him out of his seat. Only a few rapid heartbeats later, a second, more violent jolt hit. Fung saw two fellow passengers sail aloft, crashing into the ceiling of the jetliner. Passengers shrieked. In the galley a flight attendant thrown to the floor, howled in pain.

“The second jolt was the most ravaging one. It just threw us into chaos,” said Fung, a 36-year-old passenger on the 747.

On June 4 this year, Flight KL887 from Amsterdam had been smooth, until it, as aviation experts suspected, hit the clear-air turbulence (CAT) — which struck like an invisible hand 30 minutes before landing at Hong Kong International Airport (HKIA). The captain was announcing their imminent arrival when the sharp jolt choked off his address in mid-sentence.

That happened on a sunny Sunday morning. No one saw the turbulence in their path, not the aviators nor by the traffic controllers. CAT can’t be detected on radar. It’s invisible, yet, annually, it is one of the leading causes of injury to airline passengers and crew, delivering rude shocks and the clutching fear. 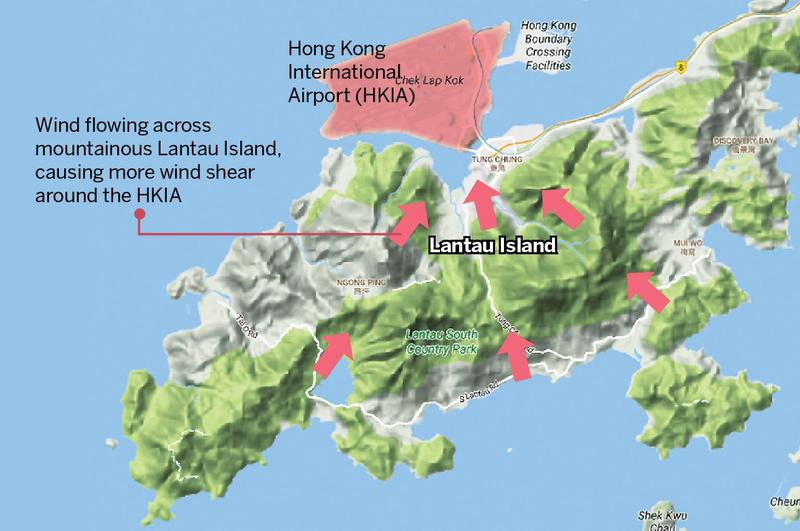 Fung’s seat belt was unfastened and it was sheer blind luck that he was spared the sudden descent that befell his unfortunate fellow passengers.

The severe CAT (clear-air turbulence) events have upped from just one, to now, two days per year

CAT, “the invisible troublemaker” as meteorologists call it, happens when two jet streams collide, one moving faster than the other in the cloudless sky. And things are going to get worse. Scientists discovered there’s mounting evidence that climate change, caused by increasing human-produced emissions of greenhouse gases, is going to drive more frequent CAT. And that means passengers and crews are in for bumpier rides, posing greater risk of injury.

Climate change, or global warming, is projected to kill a horrifying number of animal and plant species, in direct result of temperature-related maladies like malaria, according to the World Health Organization. It’s in association with a recent decline of male fertility, and an increase in human aggressive behavior, as shown by a growing number of studies published by the National Center for Biotechnology Information, part of the United States National Library of Medicine. It’s also believed to play a major role as our planet steps into the sixth great extinction — the ongoing extinction of species mainly due to human activities.

Not just those, global warming also presents a growing peril for air travelers, said Paul D. Williams, the author of the latest meteorological study published in scientific journal Advances in Atmospheric Sciences last April, who is also a professor in the Department of Meteorology at the University of Reading in the United Kingdom.

Williams found there is a causal link between CAT and carbon dioxide (CO2) in the atmosphere. Higher concentrations of atmospheric CO2 link directly to greater frequencies of CAT.

He used climate model simulations to assess the occurrence of CAT in response to a doubling of CO2 concentrations, from its pre-industrial value of 280 ppm (parts per million) to 560 ppm. The result is alarming. The model predicted light CAT to increase by 59 percent, moderate CAT by 94 percent and severe CAT by 149 percent, leading to life-threatening conditions by the end of the century.

Aircraft passengers and crew experiencing light to moderate CAT events get jostled around a bit. However, severe CAT, though considered rare, can throw an aircraft out of control, with things and people tossed around the cabin.

Today, CO2 concentration around the globe is estimated roughly at 400 ppm. Current projections hold that concentration will reach 500-1,000 ppm by the end of the century. The step-up of CO2 is believed to make high altitudes more unstable. 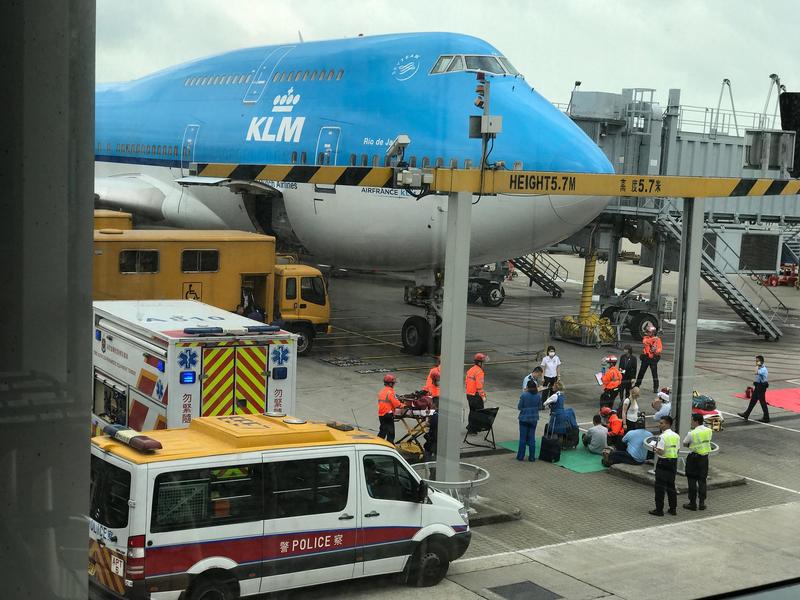 Challenges in the air

In Hong Kong, CAT encounters average 15 days a year. Over the past two years, the Hong Kong Observatory (HKO) has observed an increase in reported severe-CAT cases.

“The severe-CAT events have upped from just one, to now, two days per year, ” Shun Chi-ming, director of the HKO, disclosed in a private interview with China Daily.

Shun said that it’s hard to attribute the increased severe CAT to global warming, as there are so many other factors at play, like the random fluctuation of the number. But he said it’s worth to note that more CAT cases had been reported of late, especially around the upper-air to the northeast of Hong Kong, where jet streams flow relatively rougher due to geographical reasons.

Usually, CAT turns up around Hong Kong from December to February, when the difference between polar and tropical temperatures is the greatest and the jet stream — the driving force of CAT — is at its most violent.

The jet streams which flow from west to east are driven by the temperature disparity between the poles and the tropics, said Williams. Naturally, temperatures in polar regions are much colder than in the tropics. That’s partly because the sun’s rays have to travel farther to reach the poles, in comparison to the equator.

“However, the atmosphere is not warmed uniformly in response to our CO2 emissions. At flight-cruising altitudes of 30,000-40,000 feet (9-12 kilometers), the tropics are warming faster than the poles. This effect is increasing the north-south temperature difference, which is what drives the jet stream. That will make jet streams more sheared in response and lead to more turbulence,” Williams told China Daily. 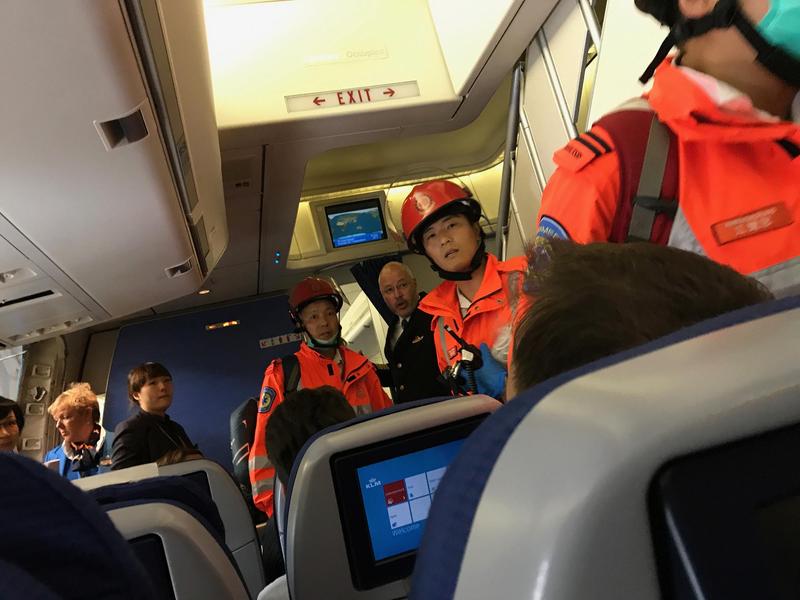 Paramedics race aboard the Flight KL887 to tend to passengers and crew members who were injured by the clear-air turbulence, 30 minutes before touchdown. (PHOTO BY FUNG WING-HO / FOR CHINA DAILY)

In addition, many pilots point out that the topographical conditions at HKIA create conditions leaving aircraft more prone to experience turbulence. The airport is perched on a reclaimed land at the north end of the mountainous Lantau Island, and to the southwest of the hilly regions of New Territories West. High-velocity winds can come shooting out suddenly from between mountain gaps, creating even more powerful wind shear — which is a sudden change in wind direction or velocity, creating changes in the headwind or tailwind encountered by a plane. A strong wind shear can blow a flight from its intended flight path, upward, downward or sideways.

The majority of wind shear and turbulence at the airport, 70 percent of all reported cases, comes from the strong winds that blow across the hills of Lantau Island. One former Hong Kong-based pilot remarked that the prevailing conditions make the airport a “not pleasant” place for lift-off and touchdown.

Nigel Leung, founder of the Aero Institute (AI-HK) and former first officer of the Hong Kong-based airline Dragonair, now Cathay Dragon, with 5,200-hour flying time, had a nasty experience leaving HKIA one stormy week in 2010. His Dragonair airbus was hit by a violent downdraft when lifting off. The airbus jolted hard as if it had been hit by a giant fist that came out of a large pocket of a storm cloud above, he said. Crew and passengers were nearly ejected from their seats. There were no injuries as all were safely buckled up.

“A lot of the turbulence encountered by planes in tropical regions, like Hong Kong, will be convective turbulence from storms,” Williams said of the routine aviation challenges facing the city. Storms gain energy from the high heat and rise to altitudes higher than where planes can fly, so there’s no getting around them, he elucidated.

CAT is believed to be an added threat to aviators flying in and out the HKIA. Former pilot Leung said pilots are used to wind shear turning up near the local airport. But for CAT, as it’s out of sight, “we have no choice but to bite the bullet and endure the violent jars.” 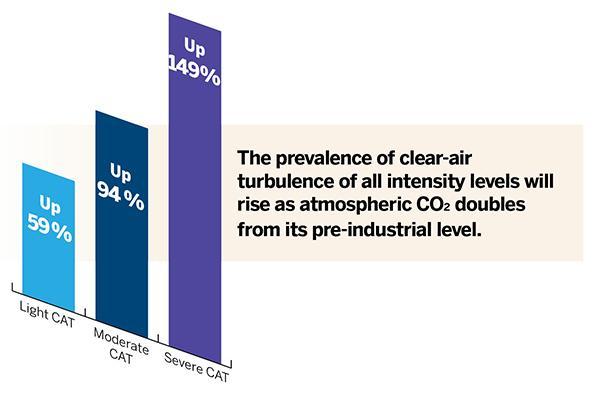 (SOURCE: A STUDY BY PAUL D. WILLIAMS, PROFESSOR OF THE DEPARTMENT OF METEOROLOGY AT THE UNIVERSITY OF READING, THE UK)

Focused on the future

Increased threats from CAT are fast-approaching, with the doubling of pre-industrial CO2 concentrations viewed as a certainty, within the next 50 years.

Today’s pilots rely, to some extent, on predictive forecasting by weather centers where they take off and land. But still, most pilots get their information from other fellow pilots traveling the same routes. Nobody thinks these means are good enough when the issue is volatile atmosphere.

Light detection and ranging technology (LIDAR) is among the technologies the aviation industry hopes will give aviators advance warning of air turbulence ahead. LIDAR is mounted on the nose of an aircraft, where it emits ultraviolet light signals to detect air density, 10-15 km ahead. The signals are reflected back to the airplane, revealing any rapid shifts in air density that could spell possible presence of CAT ahead.

However, the median speed of commercial jets is as fast as about 900 km/h. The LIDAR technology, which can only detect CAT a minute-distance away, might not be fast enough to let air crews take evasive action, some experts say.

Onboard LIDAR is still experimental. It’s expensive and heavy. It has not been embraced by commercial airlines. The cost of putting LIDAR on a plane is higher than the material cost of losses due to mishaps created by air turbulence. Experts believe LIDAR will find acceptance as an onboard technology, but first it’ll have to be miniaturized and made more cost-effective.

“The planes that will be in the air at the end of this century probably are being designed now,” said Williams. He recommended that aircraft manufacturers put climate change above their fleet designing horizon, and gear their fleets for the long-term effects of global warming. 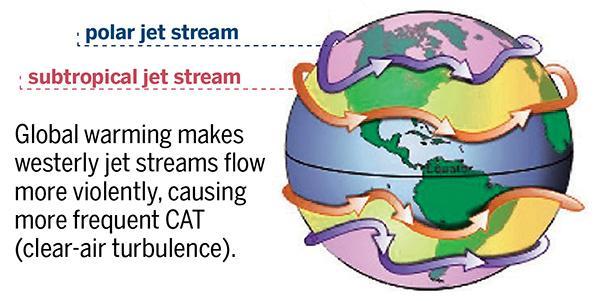 Director of HKO Shun said the department’s meteorologists have heeded hazards posed by CAT. They’re now teaming up with Cathay Pacific, the city’s largest airline, to garner flight data from its fleet. “We intended to have a better grasp of how CAT reacts to the trend of global warming by interpreting the statistics,” he added.

Fung, who didn’t fasten his seat belt during the Flight KL887 incident, considers himself “very lucky” not to be tossed around the cabin. His wife, however, was jolted out of her seat.

“I’m not fearful of flying. But the lesson taught me to be better prepared for the worst, to keep the seat belt fastened all the time when I am airborne,” said Fung.

In 2015, humans pumped 36.3 billion tons of CO2 into the air, a staggering 63-percent increase compared to 1990. In the coming decades, the CO2 level will proliferate and get heavier. Many, for the sake of personal convenience, continue to believe global warming is a hoax, giving them cause to continue their plunder of planetary resources. In fact, the earth is on course to reach levels of greenhouse gases not seen for over 400,000 years. As Williams said, the hotter the sky, the wilder it blows.

The CAT-related peril is on the verge of becoming 2.5 times more common, if humanity doesn’t work to bring CO2 emissions under control, according to Williams.

Under the heel of the invisible despoiler, as Fung Wing-ho stresses, no air traveler is assured of the good luck he had — that he avoided being flipped out of his seat, while fellow passengers hit the ceiling — that day when CAT struck his Flight KL887 as it prepared for landing at HKIA.