A plan to replicate success of other clusters could promote the emergence of a regional powerhouse, as Luo Weiteng reports from Hong Kong. 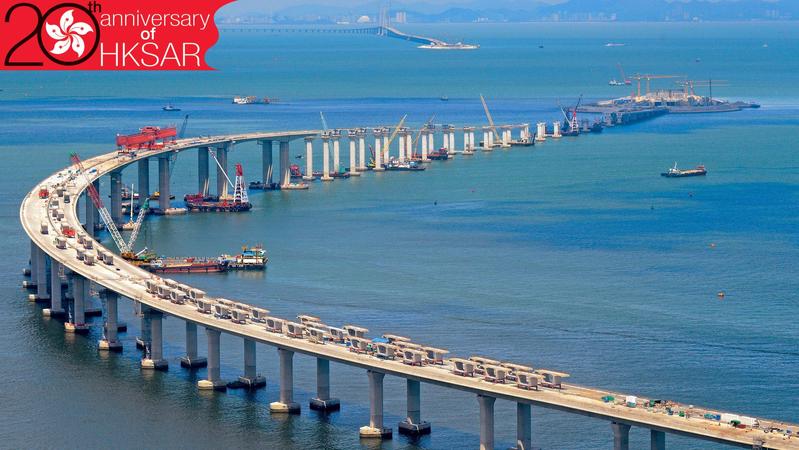 Construction of the 55-kilometer-long Hong Kong-Zhuhai-Macao Bridge is expected to be completed by the end of the year. (Photo by Xinhua)

A grand plan to create a globally competitive cluster of metropolises in the Pearl River Delta is one of the highlights of the celebrations to mark the 20th anniversary of the return of Chinese sovereignty to Hong Kong.

The move will provide a point of focus for the city, which has long sought to find its place amid the rapid development of the world's second-largest economy, according to experts.

The Guangdong-Hong Kong-Macau Greater Bay Area, poised to replicate the glowing success story of the world's three leading bay areas - in New York, San Francisco and Tokyo - will be developed into an economic powerhouse reminiscent of the country's earlier phase of development.

"The past 20 years have seen growing economic and financial ties between the Chinese mainland and Hong Kong. Yet, that's far from enough," said Cheng Shi, head of research at ICBC International Holdings in Hong Kong. "As the central government has reinforced the theme of high-level, cross-border cooperation this year, Hong Kong cannot afford to miss out on such a historic opportunity."

The concept of the Greater Bay Area was envisioned years ago, but it made its official debut in the Government Work Report delivered in March to the National People's Congress in Beijing.

"After three decades of rapid economic growth, the Chinese mainland has once again put structural economic reform at the top of the agenda, looking to shake up bloated industries and absorb overcapacity in its quest for the next growth engine," said Dominic Wu Sze-yin, chairman of the Asia Financial Risk Think Tank in Hong Kong.

"The Greater Bay Area plan is testing the region's potential to be the next highlight of the country's economy."

As a frontrunner in China's reform and opening-up policy, the Pearl River Delta has long been the showpiece of a greater story unfolding in the mainland.

Last year, the combined GDP of 11 cities in the Greater Bay Area, including Hong Kong, Macao, and Guangzhou, Shenzhen and Zhuhai in Guangdong province, reached US$1.4 trillion. The area - which has less than 0.6 percent of China's land and about 5 percent of the population - contributed about 12 percent to the national economy.

Last year, Hong Kong, Guangzhou and Shenzhen, generated combined GDP of US$880 billion, making them the three leading metropolises in the area.

Regional cooperation and integration has been underway for years in the bay area. The high-profile move includes the 55-kilometer-long Hong Kong-Zhuhai-Macao Bridge, a six-year megaproject slated to be completed by the end of year, which will reduce the journey time between Hong Kong and the two other cities to 30 minutes from more than three hours.

The bridge falls under the concept of "60-minute transport circles" to link the delta's main cities and facilitate the free flow of capital, human resources, goods and services within the urban cluster.

"The grand plan puts the region on course to benefit from synergies whereby cities will give full play to their competitive edges and focus on developing industries in which they have comparative advantages," Wu said. 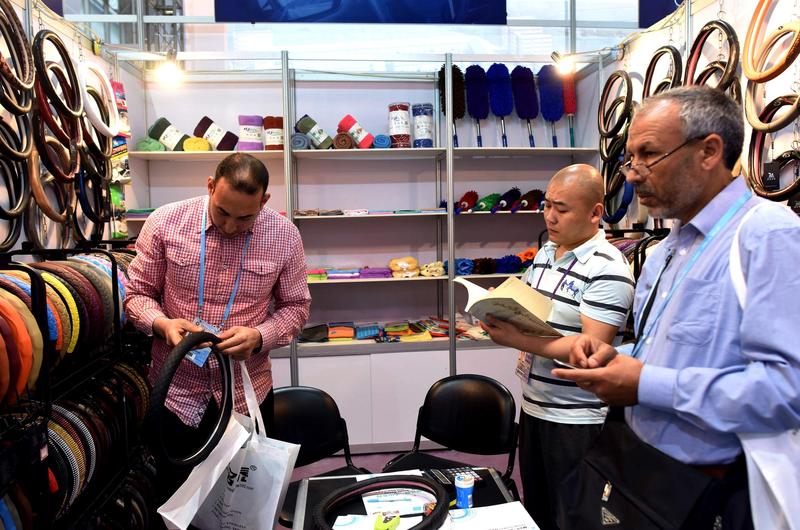 Attendees visit an auto parts stall at the Canton Fair, aka the China Import-Export Fair, in Guangdong province. (Photo by Lu Hanxin / Xinhua)

Unlike the world's three major bay areas, where the service industry accounts for more than 80 percent of regional GDP, the tertiary sector contributes about 55 percent to the economy of the Guangdong-Hong Kong-Macau Greater Bay Area.

Hong Kong, where financial services are one of the twin economic pillars, has all the elements to cement its role in the bay area, according to a report published by ICBC International Holdings.

However, the city's economy shows sign of slowing momentum, with the manufacturing sector almost withering, and other parts of its service sector grappling with mainland competition, despite the financial services industry outshining its regional rivals, ICBC International said.

With the market betting big on Hong Kong gaining traction from the proposed Greater Bay Area, the researchers believe the point is to focus on the city's unique advantages and consolidate its position in the region.

"The city remains on track to sharpen its edge as the regional financial hub. This is where Hong Kong can expect to make a big difference for the bay area plan," the ICBC report said.

Wu, of Asia Financial Risk, said Shenzhen, the fishing village-turned-megacity that is the poster child of China's "new economy" and home to a host of tech giants such as Tencent, Huawei and ZTE, is looking to consolidate its position as the bay area's center of innovation.

Banking on its size and relatively cheaper production factors, Guangzhou, the capital of Guangdong, is well positioned to develop its strengths, which include electronic manufacturing, automobiles and international trade, the report added.

Wu believes the concept of regional integration doesn't ignore the issue of regional competition. Instead, it aims to cut ineffective competition and allow resources to be allocated in a more-efficient way.

That would alleviate the burden on main cities such as Shenzhen, whose excessive economic density and red-hot property market have become drags on its development.

Integration would also look to balance regional economic development by helping less-developed cities absorb the transfer of the manufacturing industry, which has long felt the pinch from surging labor and production costs and is seeking a cheaper manufacturing base, the report said.

Fielding Chen Shiyuan, Asia economist at Bloomberg Intelligence in Hong Kong, said the initiative is simply an extension of ongoing events: "At the very beginning, the Greater Bay Area plan is anything but a project on paper. It's just a reflection of what's been going on in the region for years.

"It may not take long for the region to obtain the crown of being the fourth world-renowned bay area because we are well on the way to seeing the results."