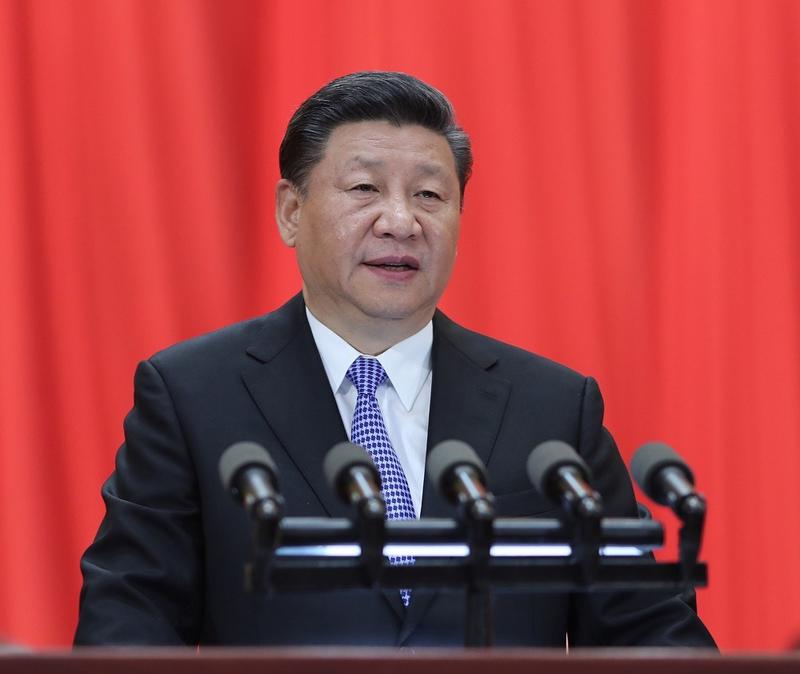 President Xi Jinping, also general secretary of the Communist Party of China Central Committee and chairman of the Central Military Commission, speaks on May 4, 2018, during a conference to mark the 200th anniversary of the birth of Karl Marx. (PHOTOS BY JU PENG AND DING LIN / XINHUA)

The Communist Party of China will continue to learn from Karl Marx, the greatest thinker of human history, and practice Marxism in the new era, President Xi Jinping said on Friday.

Xi, also general secretary of the CPC Central Committee and chairman of the Central Military Commission, made the remarks at a conference at the Great Hall of the People in Beijing to mark the 200th anniversary of Marx's birth.

The conference was held to honor the greatest thinker of human history and demonstrate the CPC's firm belief in upholding the truth of Marxism, Xi said.

"Today, we hold this grand gathering with great veneration to mark the 200th anniversary of Marx's birth, to remember his great character and historic deeds and to review his noble spirit and brilliant thoughts," Xi said at the event.

The high-level conference was attended by more than 3,000 people, including all the members of the Standing Committee of the Political Bureau of the CPC Central Committee, senior publicity officials, and representatives from military and grassroots organizations.

Marxism will always be the guiding thought of the CPC and China, and it is a powerful mental weapon to help the people to know the world, pursue truth and change the world, Xi said.

The most valuable spiritual wealth that Marx has left for the world is the scientific theory of Marxism, and the theory, like sunshine at daybreak, has illuminated the path of mankind's pursuit of historical rules and self-revolution, Xi said.

Since the publication of The Communist Manifesto 170 years ago, Marxism has spread widely around the world, and there is no other theory that has such far-reaching and deep influence over humankind, Xi said, adding that Marx is still deemed as the "No 1 thinker of the millennium".

Noting that Marxism has created an unprecedented development miracle in China, Xi said it is completely the right choice for the history and the people to choose Marxism.

Marxism has guided China to the path of building a great modern socialist country, Xi said, adding that as a loyal believer and firm practitioner of Marxism, the CPC is making continuous efforts to uphold and develop Marxism.

In his speech, Xi vowed to maintain the principle of serving the people wholeheartedly, be courageous to deepen overall reform, improve the people's livelihood, promote justice and fairness, and make joint efforts with other countries to build a community of shared future for mankind.

Communists should keep the habit of reading Marxism classics and learning Marxism principles, he added.