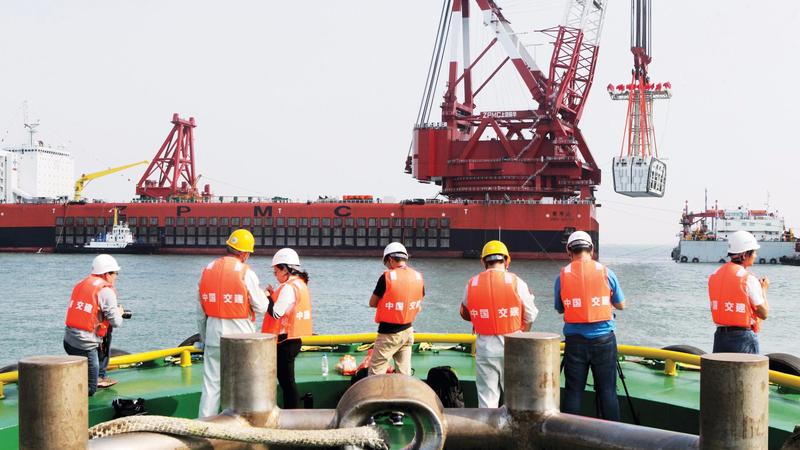 Workers install the final piece of the undersea tunnel of the Hong Kong-Zhuhai-Macao Bridge on May 2. The 55-km link consists of a series of tunnels and bridges that connects the three cities.  (ZHONG FAN / IMAGINECHINA)

Work has begun to connect the 11 cities that form China’s Greater Bay Area.

The ambitious initiative by the Chinese government is intended to foster a globally competitive economic zone in southern China through connective infrastructure and cooperation.

Massive development projects that are a marvel of engineering form a major supporting pillar in this national strategy.

“We need infrastructure that not only connects the cities but also relieves the oversaturation and burden experienced by the current infrastructure,” said James Wang, an associate professor at the University of Hong Kong who specializes in port city planning.

The Hong Kong-Zhuhai-Macao Bridge is one of the biggest infrastructure projects for the Greater Bay Area, estimated in 2015 to cost US$17 billion. The 55-km link consists of a series of tunnels and bridges that crosses the Lingding Channel and connects the three cities.

Wang explained there are many reasons behind the bridge’s construction.

“The connectivity the infrastructure provides will boost the economies of the areas involved, from tourism to logistics. That will also encourage deeper economic integration and bridge the gap in development levels between the cities,” he said.

“The bridge is a long-term investment. The benefits may not be as immediately apparent as other projects (like the Shenzhen-Zhongshan bridge) but will show as traffic flow grows over the next 20 years,” he said.

“Easier access to the Pearl River Delta is always a plus. Regulation will prove to be just as important in building economic integration in the area. However, the business landscape is still evolving and the economic benefits are a long-term bet. But odds are, there will be a reason for the bridge’s use.”

Wang said it might take some time for the bridge’s impact to be felt.

“The Hong Kong-Zhuhai-Macao Bridge is needed to ease congestion at the airports, which the region also needs more of. The long-term gains from this bridge will be apparent eventually, but full utilization will not be seen immediately,” he said.

The project missed its initial completion deadline by a year, after being plagued by a series of problems including overspending, delays, and fatal accidents.

Recently, 21 employees of a government contractor were arrested by Hong Kong’s anti-corruption agency for allegedly faking concrete test results. The government is currently investigating whether there are any safety implications.

As of now, the bridge is set to open later this year and has an expected service life of 120 years.

Some see a mutually beneficial relationship between this massive project and the area’s strong private sector. Simpfendorfer noted that the region has a very successful record of raising capital, so its “robust commercial activity” should be able to generate the revenue needed to pay off the debt from building infrastructure.

Simpfendorfer also believes there are other infrastructure projects that could be even more significant for the Greater Bay Area.

“The Hong Kong-Zhuhai-Macao bridge is a major project. But it may be that the Shenzhen-Zhongshan bridge is the more impactful project as it connects Shenzhen’s high-tech manufacturing with low-cost Zhongshan,” he said.

The Shenzhen-Zhongshan bridge will be a 24-km long structure connecting those two Pearl River Delta cities. Zhongshan is located just to the north of Macao and Zhuhai. Construction began late last year and the 42.4 billion yuan (US$6.2 billion) project will be completed an estimated five years from now.

Shenzhen was making about 90 percent of the world’s consumer electronics at one point, but the local government has been steadily shifting the city’s focus toward innovation instead of manufacturing.

6.2 billion dollars cost of bridge being built between Shenzhen and Zhongshan

And with the connectivity that the Shenzhen-Zhongshan bridge provides, it will be easier for Shenzhen to pass on its manufacturing mantle to the neighboring city.

According to Wang, transport infrastructure is of paramount importance in integrating the 11 cities of the Greater Bay Area.

The Guangzhou-Shenzhen-Hong Kong Express Rail Link (XRL) costing HK$84.42 billion (US$10.8 billion) is a mega project that falls under this category. The high-speed service will be able to travel at a speed of 350 km/h and is scheduled for a test run soon. The highly anticipated project is expected to be fully operational by the third quarter of 2018.

At the moment, a train trip from Guangzhou to Hong Kong takes about two hours. But once the Guangzhou-Shenzhen-Hong Kong XRL is functional, it will take just 48 minutes to travel between the two cities.

The project by China Railway has been in the works since 2011. At 145 km long, it has seven stops: Guangzhou South, Qingshen (Guangzhou), Humen (Dongguan), Guangmingcheng (Shenzhen), Shenzhen North, Futian and West Kowloon (Hong Kong).

“A strong transport system will benefit all the cities involved. It eases the congestion issues felt in crowded dominant cities like Hong Kong and Shenzhen by spreading the influx of people to other areas,” said Wang.

“By having infrastructure like the Guangzhou-Shenzhen-Hong Kong XRL, it can help close the development gaps between cities as it distributes capital flow through to the less-developed third- and fourth-tier cities to help them grow. The balance of development is crucial to the Greater Bay Area.”

As Guo put it: “Connective infrastructure is essential in dealing with the development seesaw between the eastern and western side of the Pearl River.”

“The Belt and Road Initiative will provide stronger infrastructure and increase connectivity between the Pearl River Delta and the ASEAN (Association of Southeast Asian Nations) countries.

“That will not only provide an outlet for the overcapacity of this area, it will also provide opportunities for the Chinese firms to spread the low-value-added manufacturing capacities across the region and focus on upgrading to high-tech production capabilities,” he said

Guo Wanda, executive vice-president of the China Development Institute, cautioned that green considerations should be applied at the planning stages.

“We must not neglect the environmental impact of these infrastructure projects. It’s important to connect not just the cities of the Greater Bay Area but also with the environment surrounding it,” Guo said.

Clearly this is a busy time for the Hong Kong and Macao special administrative regions and South China’s Guangdong province as they lay the foundations for greater connectivity and cooperation.

As time goes by, further infrastructure needs may arise. For instance, Wang already foresees a need for more airports in the region.