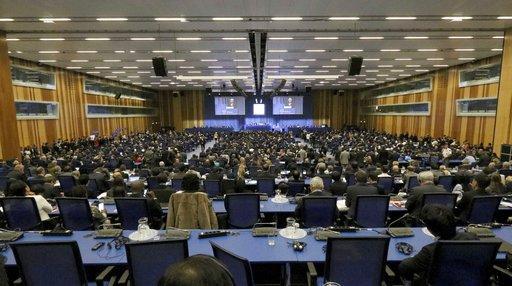 The opening of the general conference of the IAEA was held in Vienna, Austria, Sept 18, 2017. (RONALD ZAK / AP)

Tang Dengjie, head of the Chinese delegation to the UN atomic agency IAEA's 61th General Conference held in Vienna, made the remarks while addressing the opening of the conference.

China stick to the policy for efficient development of nuclear power on the basis of safety and security, said Tang, who is also chairman of the China Atomic Energy Authority and vice minister of the Ministry of Industry and Information Technology.

The Nuclear Safety Law, which was passed earlier this month by China's top legislature or the National People's Congress, will provide a strong support for the safe and sustainable development of nuclear energy in China, he said.

Since the Fukushima nuclear accident in 2011, comprehensive safety inspections have been carried out on all nuclear installations and facilities in China, Tang said.

China currently has 36 operational nuclear reactors and is building 20 more.