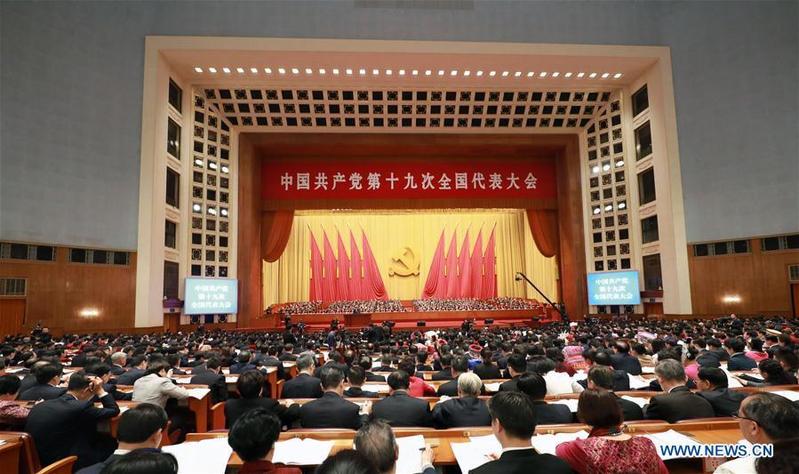 Delegates attend the 19th National Congress of the Communist Party of China (CPC) at the Great Hall of the People in Beijing, capital of China, Oct 18, 2017. (LI GANG / XINHUA)

BEIJING – The 19th National Congress of the Communist Party of China (CPC) reflects profound changes in Party building over the past five years, shown by people's satisfaction with the outcome of the anti-corruption drive and improved work style of the officials.

The country's changes and achievements in various sectors have been hailed by the about 2,300 delegates to the week-long congress, which opened Wednesday. They come from different walks of life, including officials, researchers, farmers and production workers.

The twice-a-decade congress of the ruling Party has ushered in a new era for socialism with Chinese characteristics, charting the course for developing China into a modernized, strong country by the middle of the century.

Chen Meirong, a delegate from northwest China's Ningxia Hui Autonomous Region, has felt the changes in her 30-plus years of judicial practice, particularly in the past five years.

Chen, 53, a district court judge in Shizuishan City, told Xinhua that a clean and just environment has taken shape in local grassroots law enforcement due to judicial reforms.

The achievements have been made under the leadership of the Communist Party of China, and it is our common will to further strengthen the Party leadership.

She attributed the progress, such as the dramatic drop in interference in judicial cases, to the implementation of reforms including the judicial accountability system and rules to ensure judges and prosecutors execute their duties justly and independently. She refused a senior district official who wanted to invite her to discuss a complicated lawsuit that was in the appeal process last year.

"As the rule of law goes deep in people's minds, their legal awareness and acceptance of legal verdicts are growing," said Chen.

In the new era, a better life for the people should include fairness and justice throughout the lawsuit process, she said.

The Party has attached unprecedented importance to innovation to achieve sustained quality growth with strategies, huge investment and support measures.

The delegates, backbones of various industries, have revealed a dynamic, innovative and promising CPC, which has led the nation to unprecedented development and aims "to develop China into a great modern socialist country" in the middle of the century.

Li Wanjun, a senior technician at a railway vehicles factory, was excited and encouraged by the spirit of craftsmanship mentioned in the key report to the Party congress.

"The report is a great boost to the morale of front-line technical workers. We should strive for perfection and remain innovative to jointly push Chinese manufacturing to a higher level," said Li of Changchun Railway Vehicles Co., Ltd. of China Railway Rolling Stock Corporation (CRRC). Its high-speed trains, named Fuxing (rejuvenation), run on the Beijing-Shanghai line at a speed of 350 km per hour, the fastest in the world.

Two days before the congress, the first China-made subway cars tailored for use in Boston in the United States rolled off production lines at Li's factory.

Li's retired father was one of the plant's first workers. Li has carried on his father's hardworking spirit and made innovations.

After years of reliance on foreign technology, China has developed its own key technology in high-speed train manufacturing. Li, 49, has contributed to the transformation.

Wang Guangjin, 40, a congress delegate and researcher of the Nuclear Power Institute of China in the southwestern Sichuan province, is also optimistic about the goal of a strong country.

After graduating from Sichuan University with a doctorate, he joined the institute in 2005 and developed China's own electrical penetration assembly in 2008, a key device for nuclear power plants, breaking the monopoly of foreign firms in the Chinese market.

Earlier this year, the team developed an upgraded electrical penetration assembly for Hualong One, a domestically developed third-generation reactor design, which has been adopted by nuclear plants under construction at home and abroad. 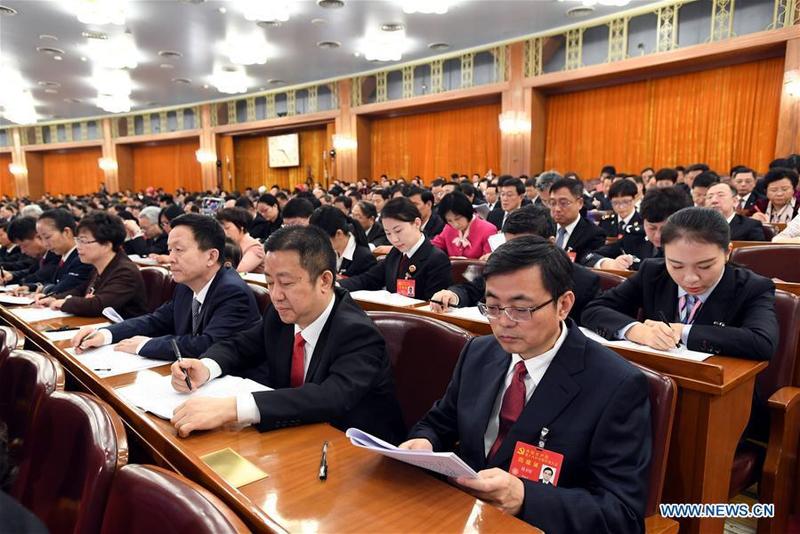 This Oct 18, 2017 photo shows delegates attending the 19th National Congress of the Communist Party of China (CPC) at the Great Hall of the People in Beijing, capital of China. (RAO AIMIN / AP)

"We must firmly keep in mind that innovation is the primary force to drive development," he said. "Our country's enhanced economic strength has provided solid support for research and development."

"In the new era, I believe China will lead the world in more fields, in addition to high-speed trains and nuclear power," said Wang, who is proud of the achievements in science and technology.

On the sidelines of the congress, he and other delegates visited an exhibition on China's outstanding achievements over the past five years at the Beijing Exhibition Center.

"The center was crowded. Everyone was happy and proud when viewing the achievements," said Wang.

"The achievements have been made under the leadership of the Communist Party of China, and it is our common will to further strengthen the Party leadership," he added. "As our Party becomes increasingly purified, its rule will be more efficient."

The 96-year-old CPC, which is dedicated to serving the people, is leading the nation to a moderately prosperous society in 2020.

Zheng Zhaolong, a delegate from Heilongjiang province who is the head of a farmers' cooperative that grows organic potatoes and beans, found reassurance in the announcement that the current round of land contracts for farmers will be extended for another 30 years upon expiration.

"Land is the lifeline of farmers. The contract extension is a strong reassurance for farmers, cooperatives and other contractors. They can go ahead and plan irrigation, infrastructure and long-term soil treatment," said Zheng.

"There is great potential to grow high-quality grains in Heilongjiang, because the land there is vast, unpolluted and productive. I'm working with companies to expand the market to raise farmers' income," he said.

Pei Chunliang, a delegate from Henan province, is Party chief of Peizhai village. Pei was a barber before becoming an entrepreneur and running companies in cement, tourism and commerce. His friends told him to put his money in real estate, but he spent it building houses and reservoirs for his hometown.

When he was elected to lead the village in 2005, he started to expand his volunteer efforts to help the poor. He demanded each Party member in the village lend a helping hand to a poor farmer.

"Strong Party leadership will ensure that no one falls behind in our drive for a moderately prosperous society and future common prosperity," he said.

"I firmly believe our motherland will be stronger and stronger. Our lives will be better and better," said Mirgul Ekimhan, a delegate and a primary school teacher from the northwestern Xinjiang Uygur Autonomous Region.