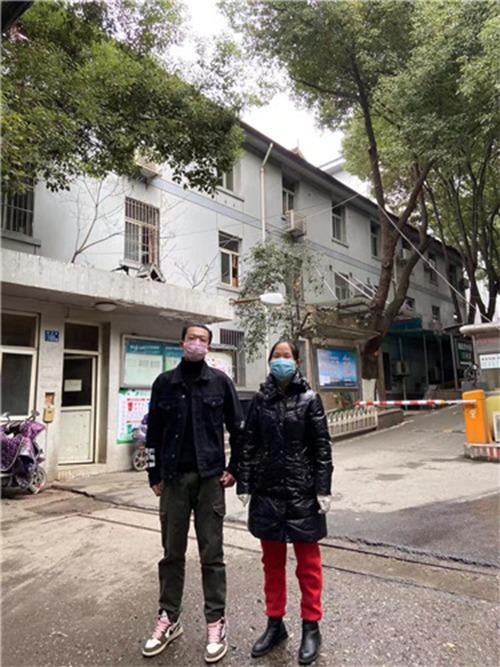 Yin Zizhe (left), a volunteer driver, poses with a nurse he helps shuttle to the hospital in Wuhan. He has helped more than 100 medical professionals to commute to work as of Tuesday. (PHOTO PROVIDED TO CHINA DAILY)

He is driving the response, literally, to the novel coronavirus outbreak. Volunteer driver Yin Zizhe has been shuttling doctors and nurses between hospitals and their homes free of charge since his hometown of Wuhan suspended its public transportation system－including subways, buses and ferries－on Jan 23 because of the outbreak.

Speed and safety are in combat. He has to go as fast as he can, so that his passengers arrive safely at their destinations, not least because the well-being of others depends on their expertise and knowledge.

"It's like a race against death. The patients are waiting for them," says Yin of his responsibilities. He recalls one occasion, and there have been many, when he drove a doctor to the hospital and within minutes of arriving the passenger was performing surgery.

For more than 20 days, Yin has started his driving day at 6 am. An early start with, more often than not, a late conclusion as stints usually end around midnight, or even later. His daily meals, if not putting too fine a point on it, consist of bread, water and maybe instant noodles.

The 25-year-old is the youngest volunteer driver of a group called Gancao Volunteers in Wuhan that consists of more than 1,000 local residents from all walks of life, most of whom are in their 30s or above.

"Helping doctors and nurses means helping ourselves. In fact, it's a battle involving everyone in the city," says Yin. He considers his role as being in the "must-do" category.

A doctor slept in his car on his way home after working for eight days with just two hours of sleep every day. Having arrived at his destination, Yin waited in the car quietly until the doctor awoke.

"They are so exhausted. I often don't talk to them and let them have a good sleep," says Yin. Sometimes, in return, his "lovely and respectful" passengers leave some face masks or disinfectant. The warm interaction between them makes Yin believe Wuhan will succeed in the battle against the virus.

In fact, when Yin made the decision to be a volunteer driver, he realized the risks involved, that he might be infected and face possible sickness or death. He even thought of writing a letter to his family.

Medical professionals who have to treat patients every day, obviously face a higher risk of exposure to the virus in Wuhan, the epicenter of the novel coronavirus outbreak. So do the volunteer drivers who help them get to work. He Hui, a 54-year-old volunteer driver, was infected and died on Feb 3.

Yin's daily routine begins with putting on his mask, disinfecting his car with alcohol and opening its windows. He also spends half an hour getting a CT scan every day to ensure his healthy condition. CT imaging is regarded as an important reference for the diagnosis of the virus.

"I'm healthy, so that means my passengers are in a healthy car."

Yin didn't visit his parents during this Spring festival, a traditional holiday for families to gather together. His family supports his decision to take part in the battle against the virus. The firmest support comes from Yin's grandfather, a veteran who once fought for the liberation of New China.

For the 25-year-old, it's the first time he has experienced such a serious epidemic. He was at primary school in Australia when the SARS epidemic hit China in 2003.His knowledge of SARS came from adults talking and online information.

"We should do something to help ourselves. It's a battlefield and medical workers are soldiers. We need to transport them to the battlefield."

Despite shuttling doctors and nurses, Yin and his friends also donate urgently needed medical materials as well as food to hospitals. Before the outbreak of the virus, Yin bought 200,000 masks for medical purposes. He later donated all these masks to hospitals in Wuhan. He also donated boxes of bottled water, bread and instant noodles.

"I put the boxes of masks in hospitals and left. I don't want people to know who I am," Yin says, adding that many people are doing the same.

Yin is a partner of an online shopping company with more than 100 employees. Because of the outbreak, all the workers are still at home. Yin does not yet know when the company will restart operations.

"I'm optimistic. A positive attitude and good mood are vital to fight against the virus," he adds.

Yin does actually have a bad back and so much driving causes discomfort and pain. But he dismisses it. He was confined to bed for a single day last week but couldn't wait to get back to work.

"I feel like if I work more, the battle will end a little bit earlier," says Yin.

As of Tuesday, Yin had helped more than 100 medical professionals to commute to work, as well as delivered medical supplies to hospitals.

He gets instructions to shuttle medical workers from the instant messaging app WeChat, where lots of volunteers like Yin actively respond to every demand sent by doctors and nurses. "Volunteer drivers are so active that we all need to be quick to grab the order."